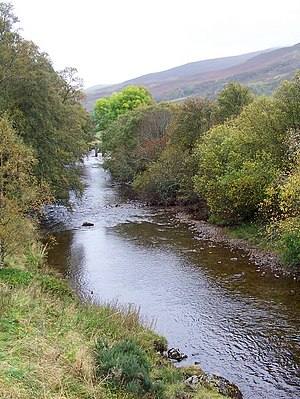 The River Isla at Little Forter

The River Isla is a tributary of the River Tay. It runs mainly through Angus and meets the Tay south of Meikleour in Perthshire.

The Isla is 46 miles long, rising in the very north of the county. The many burns running off the southern slopes of Tom Buidhe one of the highest mountains of Angus, unite as the Canness Burn, and these waters are joined those from the craggy Caenlochan Glen, below Glas Maol, the county top. The two joining become the River Isla.

The Isla descend southwards in a steep glen, Glen Isla, to such tiny places as Brewlands Bridge and Kirkton of Glenisla, tumbling over the Reekie Linn Falls and followed by now by the B951 until Bridge of Craigisla, by which time it has descended to gentler hills.

The Isla swing round and back, and down to Ruthven and into Strathmore. Soon after, the river turn west-southwest down Strathmore and into Perthshire near Cardean.

The river follows an increasingly meandering course through the meadowlands of Strathmore, north of Coupar Angus, and on to meet the River Tay at NO160377.