The county provides a great contrast across its acres; Much of the county, in particular the northern hills, is a land of rural hills. Wild moorlands cover the far north, rising high into the Peak District, and in the south is found Cannock Chase an area of natural beauty, famed for its hunting. The middle of the county is shaped by its biggest river, the River Trent, which creates low undulating lands, amongst which are found the conurbation of Stoke on Trent and its neighbour Newcastle-under-Lyme. The south of Staffordshire is heavily urbanised where the industrial towns of the Black Country have grown over the rich coal seams which drove the industrial revolution in these parts.

Staffordshire is one of the first homes of the Industrial Revolution. The district around Stoke-on-Trent has long known as the Potteries, and here, at Burslem, Josiah Wedgewood discovered his China clay process and industrialised the industry. From here too the potters had the first industrial canal dug to take their wares safely and in bulk from the factories to the towns. The Black Country of south Staffordshire became the most industrialised rgion in Britain in the nineteenth century. Coal seams underlie the land all across Staffordshire and it has rich iron ore deposits in the south too. Mining is found in north and south Staffordshire.

The largest river is the Trent. The soil is chiefly clay and agriculture was not highly developed until the mechanisation of farms.

In 1724-1726 in his A Tour Through the Whole Island of Great Britain, Daniel Defoe wrote of a Staffordshire still almost wholly rural. He wrote that Lichfield was the biggest town in the county, and Stafford the next, both now considered fairly modest. He noted amongst many observations on the county that:

The people of this county have been particularly famous and more than any other county in England, for good footmanship, and there have been, and still are among them, some of the fleetest runners in England . . . for foot-races seems to be the general sport or diversion of the country.

He put Staffordshire men’s fleetness of foot down to the hardy inhabitants of the moorlands and their constant exercise.

Most of the county remains rural and Defoe would not feel too out of place. Part of the National Forest lies within Staffordshire. The county is home too to the highest village in Britain, Flash. The village, in the Peak District at the very northern edge of Staffordshire, stands at 1,518 feet above sea level. This record was confirmed in 2007 by the Ordnance Survey after Wanlockhead in Dumfriesshire also claimed the record. The BBC's The One Show investigated the case in a bid to settle the argument and Flash was confirmed as the higher. 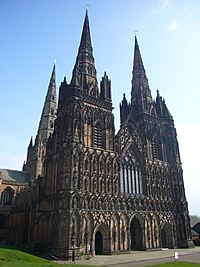 When Daniel Defoe wrote of Staffordshire in the eighteenth century, it was still almost wholly rural. Lichfield was the biggest town in the county, and Stafford the next, both now considered modest market towns. Stoke-on-Trent did not then exist; it was created in the 19th century as a federation of five towns; Hanley, Stoke-upon-Trent, Burslem, Fenton, Longton and Tunstall. The Black Country had not developed at all.

Today's pattern of towns in Staffordshire is a mixture; rural towns and villages still predominate across most of the shire, but with new towns in the industrial centres; Stoke and Newcastle on the Trent, and the Black Country towns in the very south.

Lichfield is a cathedral city. It once consisted of two very distinct areas; the Town and the Cathedral Close. Now it has developed all around, but remains dominated by its remarkable three-spired cathedral. Stoke-on-Trent is in reality still a cluster of "the Six Towns", the city centre formed by Hanley, and distinct town centres found in Stoke-upon-Trent (from which it takes its name), Burslem, Fenton, Longton and Tunstall. 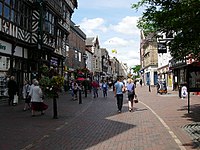 Staffordshire is divided into the five hundreds: 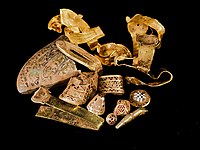 The Staffordshire Hoard, one of the most important collections of Anglo-Saxon objects found in England

The Potteries on the Trent have been the site of clay works since Roman times; excavations have found Roman tile manufacturies here. It was in the Potteries too that Josiah Wedgewood began the modern industry.

In the sixth and seventh century the lands which became Staffordshire were at the heart of the original Mercia, seed of the wider Kingdom of the Mercians, which came to cover the whole of the Midlands. The capitals were at Derby and Tamworth, and an ecclesiastical capital was founded at Lichfield. Until the middle of the seventh century, the lands of Shropshire and probably parts of Staffordshire belonged to the Kingdom of Powys, and John Morris reckons the final battle for this land to have taken place in 655 at Wall-by-Lichfield (Caer Luitcoet) in Staffordshire, which marked the end of Welsh rule in lowland Britain, confining the native Britons to the mountainous lands now known as Wales. In July 2009, the largest hoard of Anglo-Saxon gold ever found in Britain was discovered in a field near Lichfield. The artefacts, known as "The Staffordshire Hoard", have tentatively been dated to the 7th or 8th centuries, placing the origin of the items in the time of the Kingdom of Mercia.

Industrialisation came early to Staffordshire. The Black Country was an important area for metal-working by the 16th century, as it is rich in iron ore and of coal in a seam 30 feet thick (the South Staffordshire Seam or Thirty Foot Seam), the thickest coal seam in Great Britain, which breaks the surface in several places. Many people had an agricultural smallholding and supplemented their income by working as nailers or smiths, an example of a phenomenon known to economic historians as proto-industrialisation. Forges were found in every village and new techniques were developed. For many though the start of the industrial revolution was not in the forges of the Severn Valley or the Black Country but in the Potteries, where Josiah Wedgewood, founder of the famous Wedgewood China, developed and industrialised his processes.

After the Industrial Revolution took hold, industry ceased to be for local consumption; the first industrial canals connected the makers to the customers; the first running from the Potteries, paid for by the potters of the area, led by Wedgewood. Later canals such as the Birmingham Canal Navigations, and the Dudley Canal opened the Black Country likewise.

By the Victorian age, the Black Country was one of the most heavily industrialised areas in Britain, and it became known for its pollution, particularly from iron and coal industries and their many associated smaller businesses. This led to the expansion of local railways and coal-mine lines. The line running from Stourbridge (Worcestershire) to Walsall by way of Dudley Port and Wednesbury closed in the 1960s, but the line from Birmingham to Wolverhampton by way of Tipton is still a major transport route. Charles Dickens in The Old Curiosity Shop (1841), described how the area's local factory chimneys "Poured out their plague of smoke, obscured the light, and made foul the melancholy air". In 1862, Elihu Burritt, the American Consul to Birmingham, described the Black Country as "black by day and red by night", because of the smoke and grime generated by the intense manufacturing activity and the glow from furnaces at night.

The standard of Henry Stafford

The Stafford Knot, some time called a Staffordshire Knot, is the heraldic symbol most commonly associated with the county. It originated not as a local badge but as a heraldic badge of the Stafford family.

The Stafford knot has become closely associated with the county. It appears in the badges and logos of many county organisations, and has received battle honours as the badge of the Staffordshire Regiment. The Stafford Knot is now found in the arms of many civic authorities, including those of Staffordshire County Council, the Borough of Stafford, the City of Stoke-on-Trent, Walsall, Willenhall and several other borough and district councils in Staffordshire.

The Staffordshire Bull Terrier is a tough type of bull terrier bred for hunting purposes in the county. They are known affectionately as "Staffs", "Staffies", and "Nanny-dogs". The Staffie is a distinct breed from the considerably larger American Staffordshire Terrier, the American Pit Bull Terrier (now illegal in Britain), and the English Bull Terrier.

The Mermaid's Pool is a legend linked to a pool located in the mountainous ridges of The Roaches in Staffordshire. According to legend, it is said to share something of a mysterious link with the Atlantic Ocean, yet be poisonous to animals and fish. Legend has it, too, that the mermaid appears but once a year on Easter Eve at midnight, and anyone who sees her is either given the gift of immortality, or drawn into the depths of the pool to face their doom.