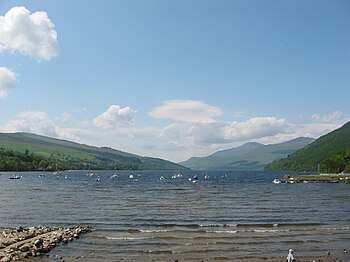 Loch Tay at Kenmore in spring

Loch Tay is a freshwater loch in the central Highlands, in Perthshire. From Loch Tay issues the River Tay; one of the longest rivers in Britain, receiving its waters under other names at it head.

Loch Tay is a long narrow loch of around 14 miles long, and typically around 1 to 1½ miles wide, following the line of the valley from the south west to north east. It is the sixth largest loch in the Highlands by area and overabout 500 feet deep at its deepest.

Ben Lawers on its north shore stands at 3,983 feet and is the 10th highest mountain in the British Isles; the highest peak in a group of seven munros.

Killin at the head of the loch, and Kenmore at the outflow of the River Tay, are the main villages on the lochside today. The smaller settlements of Acharn, Ardeonaig and Ardtalnaig stand on the south side of the loch whilst Fearnan and Lawers are on the north side.

The loch is fed by the rivers Dochart and Lochay at its head and numerous smaller streams: the Dochart as the mai stream is considered an upper reach of the River Tay, though the name of Tay is used only for the river below the loch.

Loch Tay is a popular spot for salmon fishing.

The loch once gave its name to a railway station: Loch Tay station on the Killin Railway. It is now closed.

In ancient times (in the Iron Age) people lived on defensible, man-made islands on the loch, called Crannogs. More than 20 submerged crannogs have been identified in the loch. An example has now been reconstructed on the south side of the loch at the Scottish Crannog Centre.