From Wikishire
(Redirected from Kingston-upon-Hull)
Jump to: navigation, search 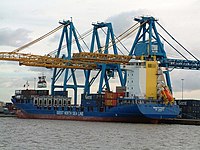 Kingston upon Hull, usually referred to as Hull, is a major port city in the East Riding of Yorkshire. It stands on the Humber, where the River Hull enters it, 25 miles inland from the North Sea.

Renamed Kings town upon Hull by King Edward I in 1299, the town and city of Hull has served as market town,[1] military supply port,[2] a trading hub,[3] fishing and whaling centre, and industrial metropolis.[2]

Hull was an early theatre of battle in the English Civil Wars.[3] Its 18th-century Member of Parliament, William Wilberforce, played a key role in the abolition of the Atlantic slave trade.[4]

The city is unique in the UK in having had a municipally-owned telephone system from 1902, sporting cream, not red, telephone boxes.

After suffering heavy damage during the Second World War,[3] Hull weathered a period of post-industrial decline,[5] during which the city gained unfavourable results on measures of social deprivation, education and policing. In recent years the city has embarked on an extensive programme of economic regeneration, reconstruction and urban renewal.[6] The economic crisis since 2008 has caused some setbacks to these developments.

Established tourist attractions include the historic Old Town and Museum Quarter, the Marina and The Deep, a city landmark. The redevelopment of one of Hull's main thoroughfares, Ferensway, included the opening of St. Stephen's Hull and the new Hull Truck Theatre. Spectator sporting activities include professional football and two rugby league clubs. The KC Stadium houses the football club and one rugby club.

Kingston upon Hull stands on the north bank of the River Humber, the great estuary dividing Yorkshire from Lincolnshire, at the mouth of its navigable tributary, the River Hull. The valley of the River Hull has been inhabited since the early Neolithic period but there is little evidence of a substantial settlement in the area of the present city.[7] The general area was attractive to early developers because it gave access to a prosperous hinterland and navigable rivers, but the actual site was not good, as it was remote and low-lying with no fresh water.

Hull was originally an outlying part of the hamlet of Myton, named Wyke. The name is thought to originate either from a Scandinavian word Vik meaning creek,[8] or from the English Wic meaning village.[9]

The River Hull was a good haven for shipping, whose main trade was in the export of wool from the abbey. In 1293 the town was acquired from the abbey by King Edward I, who on 1 April 1299 granted it a royal charter that renamed the settlement King's town upon Hull, or Kingston upon Hull. The charter is preserved in the archives of the city's Guildhall.[3] 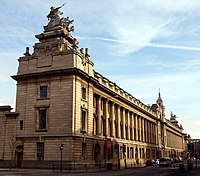 In 1440, a further charter incorporated the town and instituted local government consisting of a mayor, a sheriff, and twelve aldermen.[3]

In his Guide to Hull (1817), J.C. Craggs provides a colourful background to Edward's acquisition and naming of the town. He writes that the King and a hunting party started a hare which "led them along the delightful banks of the River Hull to the hamlet of Wyke … [Edward], charmed with the scene before him, viewed with delight the advantageous situation of this hitherto neglected and obscure corner. He foresaw it might become subservient both to render the kingdom more secure against foreign invasion, and at the same time greatly to enforce its commerce". Pursuant to these thoughts, Craggs continues, Edward purchased the land from the Abbot of Meaux, had a manor hall built for himself, issued proclamations encouraging development within the town, and bestowed upon it the royal appellation, King's Town.[10]

The port served as a base for Edward I during the First War of Scottish Independence and later developed into the foremost port on the east coast of England. It prospered by exporting wool and woollen cloth, and importing wine. Hull also established a flourishing commerce with the Baltic ports as part of the Hanseatic League.[11]

From its mediæval beginnings, Hull's main trading links were with Scotland and northern Europe. Scandinavia, the Baltic and the Low Countries were all key trading areas for Hull's merchants. In addition, there was trade with France, Spain and Portugal. As sail power gave way to steam, Hull's trading links extended throughout the world. Docks were opened to serve the frozen meat trade of Australia, New Zealand and South America. Hull was also the centre of a thriving inland and coastal trading network, serving the whole of the United Kingdom.[12]

Sir William de la Pole was the town's first mayor.[13] A prosperous merchant, de la Pole founded a family that became prominent in government.[3] Another successful son of a Hull trading family was bishop John Alcock, who founded Jesus College, Cambridge and was a patron of the grammar school in Hull.[3] 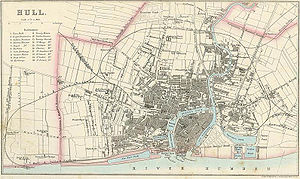 The town prospered during the 16th and early 17th centuries,[3] and Hull's affluence at this time is preserved in the form of several well-maintained buildings from the period, including Wilberforce House, now a museum documenting the life of William Wilberforce.[3]

During the English Civil War, Hull became strategically important because of the large arsenal located there. Very early in the war, on 11 January 1642, the king named the Earl of Newcastle governor of Hull while Parliament nominated Sir John Hotham and asked his son, Captain John Hotham, to secure the town at once.[3] Sir John Hotham and Hull corporation declared support for Parliament and denied Charles I entry into the town.[3] Charles I responded to these events by besieging the town.[3] This siege helped precipitate open conflict between the forces of Parliament and those of the Royalists.[3] 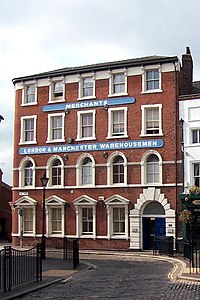 Throughout the second half of the nineteenth century and leading up to the first World War, the Port of Hull played a major role in the transmigration of Northern European settlers to the New World, with thousands of emigrants sailing to the city and stopping for administrative purposes before travelling on to Liverpool and then North America.[14]

Parallel to this growth in passenger shipping was the emergence of the Wilson Line of Hull. Founded in the city in 1825 by Thomas Wilson, by the early 20th century the company had grown – largely through its monopolisation of North Sea passenger routes and later mergers and acquisitions – to be the largest privately-owned shipping company in the world, with over 100 ships sailing to different parts of the globe. The Wilson Line was sold to the Ellerman Line – which itself was owned by Hull-born magnate (and the richest man in Britain at the time) Sir John Ellerman.[15]

Whaling played a major role in the town's fortunes until the mid-19th century.[3] Hull's prosperity peaked in the decades just before the First World War; it was during this time, in 1897, that city status was granted.[2]

After the decline of the whaling industry, emphasis shifted to deep-sea trawling until the dispute with Iceland known as the "Cod War" of 1975–1976. The conditions set at the end of this dispute barred the Hull fishmen from much of Iceland's waters and initiated Hull's economic decline.[3]

The city's port and industrial facilities, coupled with its proximity to mainland Europe and ease of location being on a major estuary, led to extremely widespread damage by bombing raids during Second World War; much of the city centre was destroyed.[3] Hull had 95% of its houses damaged or destroyed, making it the most severely bombed British city or town, apart from London, during Second World War.[16] More than 1,200 people died in air raids on the city and some 3,000 others were injured.[17]

The worst of the bombing occurred in 1941. Little was known about this destruction by the rest of the country at the time, since most of the radio and newspaper reports did not reveal Hull by name but referred to it as "a North-East town" or "a northern coastal town".[18] Most of the city centre was rebuilt in the years following the war, but as recently as 2006 researchers found documents in the local archives that suggested an unexploded wartime bomb might be buried beneath a major new redevelopment, The Boom, in Hull.[19][20] 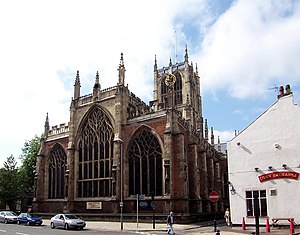 Hull is within the Diocese of York. The largest church is Holy Trinity, which is indeed is the largest parish church in England by floor area. Holy Trinity dates to about 1300.[21]

There are several seamen's missions and churches in Hull. The Mission to Seafarers has a centre at West King George Dock[22] and the St Nikolaj Danish Seamen's Church is located in Osborne Street.[23]

The economy of Hull was built on trading and seafaring, firstly whaling and later seafishing. Merchant's houses such as Blaydes House and some warehouses survive in the Old Town, where trade was centred on the River Hull, later shifting to the Humber docks. Another major industry was oilseed crushing.

Although the fishing industry declined in the 1970s, the city remains a busy port, handling 13 million tons of cargo a year.[24] Freight handling at the port is projected to rise following Network Rail oversight of a £14.5 million input in the rail link, which was completed in mid-2008. This was projected to increase its capacity from 10 trains a day to 22.[25][26]

The port operations run by Associated British Ports and other companies in the port employ 5,000 people. A further 18,000 are employed as a direct result of the port's activities.[27] The port area of the city has diversified to compensate for the decline in fishing by the introduction of Roll-on Roll-off ferry services to Europe. These ferries now handle over a million passengers each year.[28] Hull has exploited the leisure industry by creating a marina from the old Humber Street Dock in the centre of the city. It opened in 1983 and has 270 berths for yachts and small sailing craft.

Industry in the city is focused on the chemical and health care sectors. Several well-known British companies, including BP, Smith & Nephew, Seven Seas, and Reckitt Benckiser, have facilities in Hull.[29]

In recent years, with the decline of fishing and heavy industry, the retail sector, tourism, the arts and further and higher education sectors have played an increasingly prominent role in the process of economic regeneration and raising the profile of the city. In 2009 it was estimated that businesses in Hull deliver an annual turnover of almost £8 billion, and over 5 million annual visitors contribute almost £210 million to Hull's economy.[30]

In January 2011 Siemens and Associated British Ports signed a memorandum of understanding concerning the construction of wind energy machine manufacturing plant at Alexander Dock. The plan would require some modification of the dock to allow the ships, used for transporting the wind turbines, to dock and be loaded.[31][32][33] Planning applications for the plant were submitted in December 2011.[34]

Phase 2 will include a new 200-bedroom 4-star hotel, a restaurant, and more high-quality office space.[37] 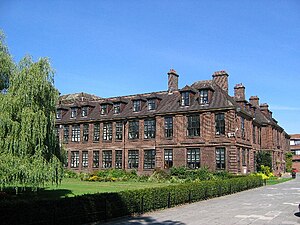 The Venn Building, part of the University of Hull

The University of Hull was founded in 1927 and received its Royal Charter in 1954. It now has a total student population of around 20,000 across its main campuses in Hull and Scarborough.[38] The main University campus is in North Hull, on Cottingham Road. Notable alumni include former Deputy Prime Minister Baron Prescott of Kingston-upon-Hull (John Prescott), The Poet Philip Larkin, social scientist Lord Anthony Giddens, Woman's Hour presenter and writer Jenni Murray, and the dramatist Anthony Minghella.

Hull University is a partner in the new University Centre of the Grimsby Institute of Further and Higher Education (GIFE) being built in Grimsby, Lincolnshire.[39]