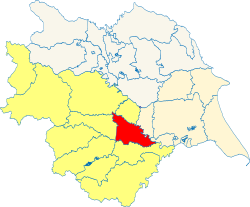 Barkston Ash Wapentake shown within the West Riding and Yorkshire

Barkston Ash is a wapentake in the West Riding of Yorkshire, adjacent to the border with the East Riding. It is bounded by the Ainsty to the north; by Claro to the north-west; by Skyrack to the west; by Osgoldcross to the south; and by Howdenshire and Ouse and Derwent in the East Riding to the east. It is named after the meeting-place at the village of Barkston. It had a population of 67,225 in 2011.

The wapentake includes the ancient parishes of: