Dewsbury is a minster town in the West Riding of Yorkshire. To the east lies Wakefield and to the west Huddersfield, while the Riding's greatest city, Leeds is to the north. Dewsbury stands on the River Calder and an arm of the Calder and Hebble Navigation.

Dewsbury underwent a period of major growth in the 19th century as it industrialised rapidly as a mill town, Dewsbury went through a period of decline. More recently there has been redevelopment of derelict mills into flats, and regenerating of run-down areas.

According to the 2001 the Dewsbury urban sub-area had a population of 54,341. Dewsbury is the largest town in the Heavy Woollen District, a conurbation of small mill towns.

The Domesday Book of 1086 records the name as Deusberia and Deusberie. It is an Old English name, as are many of the names of the West Riding notwithstanding Norse influence. "-bury" would usually mean "fort" or "hill", but the first element is ambiguous. "Dew-" may be from:

In Anglo-Saxon times Dewsbury was a centre of considerable importance, its parish encompassing Huddersfield, Mirfield and Bradford. In 627 Paulinus, the first Bishop of York, preached somewhere in this region, often believed to have been on the banks of the River Calder at Dewesbury. Numerous Saxon graves have been found in Dewsbury and Thornhill.[1] 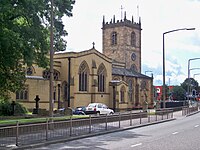 Dewsbury Minster stands near the River Calder, traditionally on the site where Paulinus preached. Parts of the church date to the 13th century. The tower houses "Black Tom", a bell which is rung each Christmas Eve, one toll for each year since Christ's birth, known as the "Devil's Knell", a tradition dating back to the 15th century. The bell was donated by Sir Thomas de Soothill, in penance for murdering a servant boy in a fit of rage. The tradition was commemorated on a Royal Mail postage stamp in 1986.

Dewsbury market was established in the 14th century for local clothiers. Occurrences of the plague in 1593 and 1603 closed the market and it reopened in 1741.

Throughout the Middle Ages Dewsbury retained a measure of importance in ecclesiastical terms, collecting tithes from as far away as Halifax in the mid-14th century. John Wesley visited the area five times in the mid-18th century, and the first Methodist Society was established in 1746. Centenary Chapel on Daisy Hill commemorates the centenary of this event, and the Methodist tradition remained strong in the town.[2] 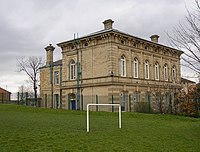 In 1770, a short branch of the Calder and Hebble Navigation was completed, linking Dewsbury to the main canal system and giving access to Manchester and Kingston upon Hull. By the time of the Industrial Revolution, Dewsbury was a centre for the "shoddy" and "mungo" industries which recycled woollen items by mixing them with new wool and making heavy blankets and uniforms. The town benefited economically from the canal, its location at the heart of the Heavy Woollen District, and its proximity to nearby coal mines. The railway arrived in 1848 when Dewsbury Wellington Road railway station on the London and North Western Railway opened; this is the only station which remains open. Other stations were Dewsbury Central on the Great Northern Railway which closed in 1964 and Dewsbury Market Place on the Lancashire and Yorkshire Railway which closed in 1930; a fourth goods-only station was built in the early 20th century at Savile Town by the Midland Railway. In 1985 a bypass road was built on the site of Central Station and its adjacent viaduct, and nothing remains of Market Place Station. The 19th century saw a great increase in population, rising from 4,566 in 1801 to around 30,000 by 1890.

The town's rapid expansion and commitment to industrialisation was not without problems, resulting in social instability. In the early 19th century, Dewsbury was a centre of Luddite opposition to mechanisation in which workers retaliated against mill owners who installed new textile machinery and smashed the machines which threatened their way of life. In the 1830s, Dewsbury was a centre of Chartist agitation. In August 1838, after a speech by Chartist leader Feargus O'Connor, a mob of between five and seven thousand people besieged the Dewsbury Poor Law Guardians in the town's Royal Hotel. The mob was dispersed by troops. Trouble flared in 1840 when radical agitators seized control of the town, and troops were stationed to maintain order. This radical tradition left a legacy in the town's political life, its first elected MP in 1867 was John Simon, a Jewish lawyer from Jamaica and a Liberal.

The mills were often family businesses and continued manufacturing after the wool crisis in 1950–51, which saw Australian sheep farmers begin to charge higher prices. However, the recovery of the late 1960s was reversed by the 1973 oil crisis, and the textile industry in Dewsbury declined, with only bed manufacturing remaining a large scale employer.

Much of Dewesbury's recent history has been grim, to match its decline from a prosperous mill town to town of poor, run-down council estates.

Peter Sutcliffe, the Yorkshire Ripper, was questioned at Dewsbury Police Station and charged before magistrates in the courtroom of Dewsbury Town Hall after his arrest in January 1981.

After 2005 Dewsbury was labelled a troubled town after a series of negative press reports[3] and became "the town that dare not speak its name"[4] after high profile crimes brought it into the media spotlight. In June, a girl of 12 was charged with grievous bodily harm after attempting to hang a five-year-old boy from Chickenley.[5] The ringleader of the group responsible for the 7 July 2005 London bombings lived in Lees Holm, Dewsbury. On 19 February 2008, Shannon Matthews, aged nine, disappeared in Dewsbury Moor. Feared abducted, Shannon was found hidden in the base of a divan bed a month later; the hunt was the largest police search since that for the Yorkshire Ripper 30 years earlier but her disappearance was found to be a deception and her mother Karen Matthews and accomplice were jailed for eight years for abduction and false imprisonment.

In October 2010 the Dewsbury Revival Centre opened, based the refurbished former St. Mark's Church on Halifax Road, Dewsbury. This was the church attended by the Titanic bandmaster, Wallace Hartley.

In and around the town 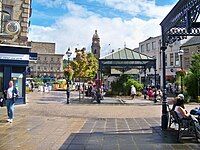 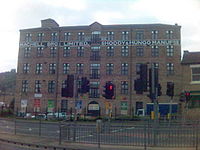 Machell's Shoddy and Mungo Mill in the town centre

Dewsbury is surrounded by hills dominating the views from the town, notably Earlsheaton, Dewsbury Moor, Staincliffe and Thornhill. The approach down from Earlsheaton through the Wakefield Road cutting, constructed in 1830, is dramatic with the view of the town centre nestling in the Calder Valley opening up as you descend.

The majority of the older buildings were built in Yorkshire stone, many of which have recently been restored by sandblasting. Notable structures include the railway viaduct, and Machell's Shoddy and Mungo Mill, converted into apartments but still bearing the famous slogan of its original occupants. 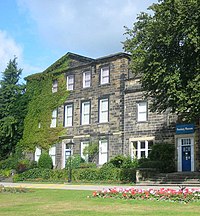 Dewsbury Museum is within the mansion house in Crow Nest Park. Nearby attractions include the National Coal Mining Museum for England.

The town has an annual event called Spirit, a street theatre show every winter which takes place in the town centre.

Dewsbury is briefly referenced in The Beatles' 1967 film Magical Mystery Tour and in the 1991 single "It's Grim Up North" by the ‘’Justified Ancients of Mu Mu’’.

The 1960 book A Kind of Loving is set in a fictional city named "Cressley", but its description was based upon Dewsbury. The author, Stan Barstow, was born in Horbury and grew up in Ossett - both of which are just to the east of Dewsbury.

More recently, the phrase "Dewsbury noir" has been used to describe the violent novels of David Peace, who was born in Dewsbury but lives in neighbouring Ossett.[6]