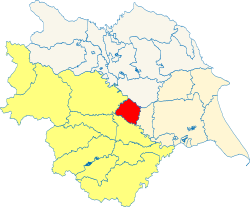 The Ainsty shown within the West Riding and Yorkshire

The Ainsty is first recorded in the Domesday Book of 1086 in the form Ainestig. It was named from Ainsty Cliff at Bilbrough,[1] presumably the original meeting place of the wapentake. Ainsty Cliff was itself named from a small narrow path which led from Steeton Farm over Ainsty Cliff to Bilbrough. The word Ainsty is from Old English ān stiga, meaning "one-man path" or "narrow path", which became einstigi in Old Norse.[2]

The city of York later claimed jurisdiction over the area under a royal charter of King John granted in the early 13th century. The validity of this charter was a matter of dispute between the city and the Crown, eventually leading to the imprisonment of the mayor in 1280 when it was proved that a clause in the document had been altered.[3] The bailiffs of the city were subsequently able to resume jurisdiction of the wapentake, although it was not formally included in the city when it was created a county corporate in 1396.[3]

In 1449 the Ainsty was annexed to York, with the sheriffs of the city assuming authority. The city, which was said to be "in decay", was granted the "privileges and franchises" of the Ainsty to improve its financial position. In 1463 the mayor and aldermen were made justices of the peace with the commission of oyer and terminer.

The wapentake includes the ancient parishes of: