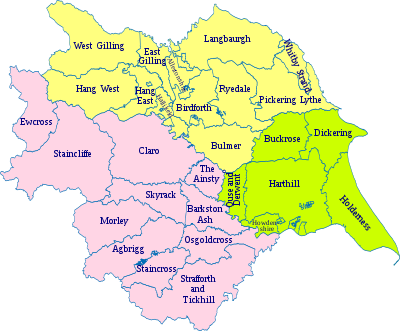 The Three Ridings of Yorkshire are the ancient division of the county, and the creation of the Norse period from which Yorkshire itself arose. Yorkshire, as the largest county in the United Kingdom, is most conveniently divided and the three ridings are the fundamental geographical and cultural divisions of the shire.

The three ridings surround the City of York, their boundaries meeting at the walls of the city: thus York within the walls is the only part of Yorkshire outside any of the ridings.

Each riding is divided into wapentakes.

The name "Riding" is from the Old Norse Þriding or Þriðing, meaning a "thirding". The term "Thriding" survived into the Middle Ages.

The names, area (in square miles), population, and principal towns of each Riding are as follows:

It appears that each Riding had a common law moot or court just as the shire had its shiremoot. According to the 12th century compilation known as the Leges Edwardi Confessoris, the riding was the third part of a county (provincia); to it causes were brought which could not be determined in the wapentake, and a matter which could not be determined in the riding was brought into the court of the shire.

There is abundant evidence that riding courts were held after the Norman Conquest. A charter which Henry I granted to the Church of St Peters at York mentions wapentacmot, tridingmot and shiresmot (-mot designates a moot, or court of popular assembly), and exemptions from suit to the thriding or riding may be noticed frequently in the charters of the Norman kings. As yet, however, the jurisdiction and functions of these courts have not been ascertained. It seems probable from the silence of the records that they had already fallen into disuse early in the 13th century, Yorkshire being so cut up with 'liberties' and 'particulars' and thus a superfluity of courts and jurisdictions.

Winifred Holtby's 1936 novel South Riding and its adaptations were set in a fictional fourth riding (based on the West Riding). The title of the novel trilogy Red Riding by David Peace, set in Yorkshire, is a play on the word.

An additional division found in Yorkshire is the Ainsty of York. This is not a fourth riding but a wapentake of the West Riding (though some times found mapped attached to the East Riding) extending south from the walls of York). It was a mediæval liberty granted to the Corporation of the City of York in which the Corporation exercised jurisdiction, to provide an additional income for the city.

In the nineteenth century parliament effected a division of two of the larger Irish counties, those of Cork and Tipperary. Each was set into two divisions, which were called 'ridings'; a thing hard to justify etymologically as "riding" means a "third".