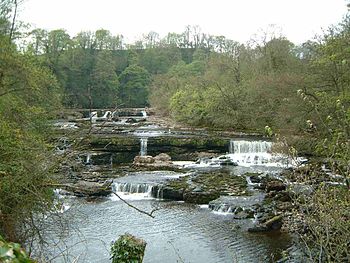 The Aysgarth Falls in Wensleydale

The River Ure is a river of Yorkshire, one of the great streams of the Yorkshire Dales. It is 74 miles long from its source in the Pennines to Cuddy Shaw Reach near Linton-on-Ouse, at which point the river becomes the Yorkshire Ouse, not by joining or uniting itself with another new river but simply by a change of name.

The Ure is the principal river of Wensleydale, which is the only one of the Yorkshire Dales named after a village rather than its river, albeit that the old name for the valley was Yoredale after the river.

The Ure is one of many rivers and waterways that drain the Dales into the River Ouse. Tributaries of the Ure include the River Swale and the River Skell.

The earliest recorded name of the river is Earp in about 1025, though this is probably a scribal error for Ear Ƿ, abbreviating Ear Ƿæter ("Ear Water"), in which 'Ƿ' is the Old English letter wynn, used to write the sound 'w'.[1] By 1140 it is recorded as Jor, and a little later as Yore, from which we have the old name of the dale, 'Yoredale'. In Tudor times the antiquarians John Leland and William Camden used the modern form of the name.[2]

The famous ruined monastery in the dale, Jervaulx Abbey, takes its name from Jor-dale.

The name probably means "the strong or swift river".[3] This is on the assumption that the Brittonic name of the river was Isurā, a reconstructed name based on the Roman name for Aldborough; Isurium Brigantum. An intervocalic s is known to have been lost in Brittonic at an early date.

The source of the river is Ure Head on Abbotside Common whence it flows west south-west to the valley floor and then turns south. Where it reaches the A684 it turns east along Wensleydale as far as Wensley. From here it flows south-east to Jervaulx Abbey and shortly after south to Mickley. Here it returns east and then south to Ripon. A little way below Ripon the Ure flows east again to Boroughbridge.

To the east of Boroughbridge, the Ure is joined by the River Swale, coming out of Swaledale.

About 6 miles downstream of this confluence, at Cuddy Shaw Reach near Linton-on-Ouse, the river changes its name to the River Ouse.

Upper Wensleydale is high, open and remote U shaped valley overlying Yoredale Beds. The gradient is gentle to the north end of the valley, becoming steeper further south. Drumlins lay either side of the river, which is shallow but fast flowing. The river is fed from many gills cutting through woodland and predominantly sheep farmsteads. The Settle to Carlisle railway runs along the western side of the valley here.

Mid Wensleydale is made of Great Scar limestone under Yoredale beds that make up the valley sides which are marked with stepped limestone scars. The valley floor is made from glacial drift tails and moraine. The river here is broad and gently flowing in meanders in a stony channel. There are four tributary valleys that contribute to several waterfalls in this area.

Lower Wensleydale is a broader version of mid Wensleydale with the river gently meandering until it drops significantly at Aysgarth over the platformed waterfalls. The valley sides become increasingly wooded.

From Middleham onwards the river is a typical mid-age river and meanders in wider arcs as it flows south-east. [4]

The valley has been inhabited since prehistoric times. Examples of earthworks and other artifacts from the Bronze and Iron Ages can be seen in the Dales Countryside Museum in Hawes and the Romans built a fort at Bainbridge. Place-names in the valley denote the different types of settlers, such as Angles and Norse with typical suffixes like 'ton' and "sett".

During the Middle Ages, much of the upper dale was sheep country belonging to Middleham Castle and Jervaulx Abbey.

In 1751, the Richmond to Lancaster turnpike was created and originally followed the Roman road from Bainbridge. In 1795 it was diverted along the dale to Hawes and took the Widdale route, now the B6255 to Ingleton.[5]

The beauty of the river and its dale have often drawn artists and poets, and latterly filmmakers and television producers. It may be familiar from many as scene, amongst which are:

Farming, lead mining, dairying and quarrying are the mainstays of the modern economy of the valley, along with tourism. The dairy at Hawes produces Wensleydale cheese. Brewing takes place in Masham at the Black Sheep and Theakston Breweries.

There are many waymarked footpaths and open countryside. The Pennine Way passes through Hawes.[5]

The River Ure is navigable upstream as far as its junction with the Ripon Canal, two miles southeast of Ripon, a distance of 13.6 miles. There are locks at Milby, where a short cut bypasses the weir at Boroughbridge, and at Westwick.

The Leeds and Thirsk Railway bought the navigation in January 1846.[11] The navigation was neglected, and the lack of dredging resulted in boats having to be loaded with less cargo. There was a brief upturn in trade in the 1860s, but the decline continued after that. By 1892, no traffic proceeded past Boroughbridge, and the North Eastern Railway took action to prevent the waterway above Boroughbridge being used.[11]

The differing habitats of the area have their own populations of flora such as cranesbill, bistort, pignut and buttercup. Other varieties that can be seen in the area are wood anemones, violets, primroses, purple orchids, cowslips and herb paris. Some plants, such as spring sandwort, have managed to grow where the lead mining took place. There are large populations of badger, roe deer, fox and rabbit in the valley. Amongst the variety of birds that can be seen in the valley are golden plover, curlew and oystercatcher.[5]

The river has a great many tributaries. From the source of the river one may count:

From the source of the river: