Rotherham is a town in the West Riding of Yorkshire which stands on the River Don, where the Don meets the River Rother, between Sheffield and Doncaster.

The town is six miles from Sheffield City Centre and is almost contiguous with that city’s urban area.

Rotherham is connected to the rest of the country by the M1 and the M18 motorways.

Beyond the town centre and away from the Don Valley, the Rotherham district is largely rural, containing a mixture of farming and mining communities as well as the large Wentworth Woodhouse estate, where the last surviving kiln of the Rockingham Pottery can be seen.

The town's name is Old English "Rother homestead". It is suggested that the river's name though is older from the Old British language cognate with dŵr ("water")[1] though the English "Hriðer" ("ox") is another possibility.

Rotherham in the late Middle Ages

Although there were Iron Age and Roman settlements in the area covered by the town, Rotherham was not founded until the early Middle Ages. It established itself as a key Anglo-Saxon market town, lying on a Roman road near a forded part of the River Don.

By the late Saxon period, Rotherham was at the centre of a large parish on both sides of the River Don. After the Norman Conquest the estate was given to Nigel Fossard. His successors the De Vescis rarely visited the town and did not build a castle or contribute to the town's civic life, but maintained a Friday market and a fair. In the mid 13th century, John de Vesci and Ralph de Tili gave all their possessions in Rotherham to Rufford Abbey. The monks collected tithes from the town and gained rights to an additional market day on Monday and to extend the annual fair from two to three days.[2]

The townsmen of Rotherham formed the "Greaves of Our Lady's Light", an organisation which worked with the town's three guilds. In 1547 during the Reformation it was suppressed for superstition but revived in 1584 as the Feoffees of the Common Lands of Rotherham, and remains in existence.[2]

In the 1480s the Rotherham-born Archbishop of York, Thomas Rotherham, instigated the building of The College of Jesus to rival the colleges of Cambridge and Oxford. It was the first brick building in this part of Yorkshire and taught theology, singing, grammar and writing.[2]

The College and new parish church of All Saints made Rotherham an enviable and modern town at the turn of the 16th century. The college was dissolved in 1547 in the reign of Edward VI, its assets stripped for the crown. Very little remains of the original building, although the street is still known as College Street. Walls of part of the College of Jesus are encased within No 23 College Street and Nos 2, 2A, 4, 6 and 8 Effingham Street (formerly listed as Effingham Street, No 4 (The Old College Inn) and No 6). Although a fragmentary survival, the walls of the College of Jesus are the earliest surviving brick structure in south Yorkshire and formed part of a fundamental element in the development of Rotherham. By the end of the 16th century, Rotherham had fallen from a respectable college town to a notorious haven of gambling and vice. The history of Thomas Rotherham and education in the town are remembered in the name of Thomas Rotherham College.[3]

Memorial brass of the Swift family in All Saints

The region had been exploited for iron since Roman times, but it was coal that first brought the Industrial Revolution to Rotherham. Exploitation of the coal seams was the driving force behind the improvements to navigation on the River Don, which eventually formed the Sheffield and South Yorkshire Navigation system of navigable inland waterways.

Rotherham iron was very highly regarded for its strength. Iron, and later steel, became the principal industry in Rotherham, surviving into the 20th century. The Walker family built an iron and steel empire in the 18th century, their foundries producing high quality cannon, including some for the ship of the line HMS Victory, and cast iron bridges, one of which was commissioned by Thomas Paine.

The Parkgate Ironworks was established in 1823 by Sanderson and Watson, and changed ownership several times. In 1854, Samuel Beal & Co produced wrought iron plates for Isambard Kingdom Brunel's famous steamship the SS Great Eastern.[4] In 1864, the ironworks was taken over by the Parkgate Iron Co. Ltd, becoming the Park Gate Iron and Steel Company in 1888. The company was purchased by Tube Investments Ltd in 1956 and closed in 1974. Steel, Peech and Tozer's massive Templeborough steelworks (now the Magna Science Adventure Centre) was, at its peak, over a mile long, employing 10,000 workers, and housing six electric arc furnaces producing 1.8 million tons of steel a year. The operation closed down in 1993.

A glass works was set up in Rotherham in 1751, and became Beatson Clark & Co, one of the town's largest manufacturers, exporting glass medicine bottles worldwide. Beatson Clark & Co was a family business until 1961, when it became a public company. The glass works operated on the same site, although the family connection ceased and the company is owned by Newship Ltd, a holding company linked to the industrialist John Watson Newman. It continues to the manufacture glass containers for the pharmaceutical, food and drinks industries.[6] In the 19th century, other successful industries included pottery, brass making and the manufacture of cast iron fireplaces. Precision manufacturing companies in the town include AESSEAL, Newburgh Engineering, Precision Magnetics, Orkot Composites and Darron Oil Tools SBO. Rotherham is the location of the Advanced Manufacturing Park (AMP).

Milling grain into flour was a traditional industry in Rotherham, formerly in the Millmoor area, hence Rotherham United FC's nickname "The Millers". Flour milling continued at the Rank Hovis town mill site on Canklow Road until September 2008.[7] The site of the mill is a warehousing and distribution facility for Premier Foods. 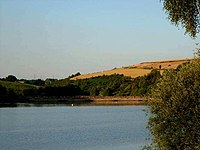 Rotherham was affected by the floods in the summer of 2007, which brought disruption to the town, closed roads, schools, the local transport system and damaged personal and commercial property. The Parkgate Shopping centre was flooded, with shops suffering damage and losing stock. Ulley Reservoir caused major concern when its dam showed signs of structural damage, threatening to break and release the water into Canklow, Catcliffe, Treeton, Whiston areas and an electrical sub-station serving Sheffield.[8] Rother FM evacuated its studios in the danger area, causing its sister station, Trax FM, to broadcast on the Rother FM frequency. Fire service and police officers used thirteen high-powered pumps to lower the water level in the reservoir and reduce pressure on the dam wall, which was damaged but held. By summer 2008, the reservoir and surrounding country park reopened.

A new wetland and flood storage area, Centenary Washlands, has since been built by Rotherham Council and the Environment Agency to prevent flooding in the future. Sheffield Wildlife Trust manages the site as a local nature reserve.

Rotherham is amongst the leaders in advanced manufacturing in the UK. The main Corus Engineering Steels (CES) plant produces steel for products worldwide, including Renault Formula One cars and the Airbus A380 "super jumbo" aeroplane. The smaller (CNS) site based close to the old Templeborough Melting Shop & Rolling Mills site produces hot rolled narrow strip to high tolerances for the aeronautical and agricultural industries. The future of the steel industry in Rotherham is in doubt in light of the financial crisis of 2007-2009. Rotherham's economic reliance on supplying the automobile industry with raw steel led to the announcement of a significant scale-back of operations in January 2009. This, combined with the closure of Rotherham's Burberry clothing factory led to the most significant economic crisis in the borough since the 1980s.

Over the next 20 years, Rotherham is expected to receive £2 billion in investment from private industry. The town's economy, when combined with that of Sheffield, is growing faster than Leeds and Manchester. In July 2010, statistics from Yorkshire Forward showed that Rotherham had attracted new investment and industry from abroad.[9] The Advanced Manufacturing Park has attracted major companies including Rolls Royce and Castings Technology International (Cti). Technology developed on the AMP is utilised in leading edge projects within Formula One and the next generation of military and commercial aircraft, including the new Boeing 787 Dreamliner. Financial solutions company Norton Finance are based in the town; employing 250 people at their head office.[10]

Because of Rotherham's proximity to the Meadowhall Centre in the Lower Don Valley, and Sheffield city centre, it does not have a wide range of big name stores for a town its size. The town centre includes major high street stores, several independent stores, markets, cafés, restaurants and bars. There are indoor and outdoor markets and a street market during the week. There are restaurants, cafes and bars around the town centre.[11] Outside the centre is Parkgate Shopping Park, which is linked to the town centre by a free shuttle bus.

2007 saw the start of an urban regeneration project known as the "Rotherham Renaissance", tasked with creating a vibrant town centre. 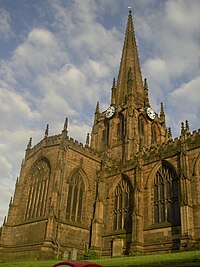 Rotherham Minster in All Saints Square dates from the 15th century and includes parts from earlier Saxon and Norman structures. It was described by Pevsner as "the best perpendicular church in the country", and by Simon Jenkins as "the best work in the county".

Close to the town centre is the 15th-century Chapel of Our Lady of Rotherham Bridge (or "Chapel on the Bridge"), beside Chantry Bridge (a road bridge opened in the 1930s). It is one of four surviving bridge chapels in the country. The chapel was restored in 1923, having been used as the town jail and a tobacconist's shop. 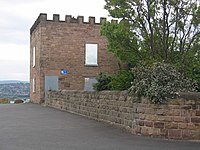 Built in the 18th century, Clifton House houses Clifton Park Museum. The remains of the 16th-century College of Jesus are in the town centre. Boston Castle, in the grounds of Boston Park, was built as a hunting lodge by Thomas, 3rd Earl of Effingham between 1773 and 1774 to mark his opposition to British attempts to crush the Americans in their war for independence. It is named after Boston, Massachusetts, the scene of the Boston Tea Party.[12]

On the outskirts of Rotherham, a brick-built glass-making furnace, the Catcliffe Glass Cone, is the oldest surviving structure of its type in Western Europe and one of four remaining in the United Kingdom - the other surviving cones can be found in Wordsley in the Black Country, Lemington Glass Works and Alloa in Clackmannanshire. Threatened with demolition in the 1960s, it has been preserved as a Scheduled Ancient Monument and stands as a focal point in a sheltered housing complex. At Maltby near Rotherham, the mediæval ruins of the Cistercian Roche Abbey are a popular tourist destination. 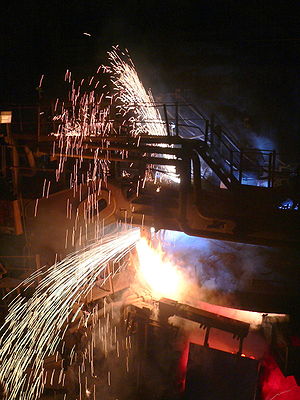 Furnace at the Magna Centre, Rotherham

Clifton park, in the town centre, includes sport facilities, an outdoor paddling pool, a small fairground and an adventure park.

Minster Gardens, is an urban park in the heart of the town centre, next to Rotherham Minster and All Saints Square. It has an amphitheatre and space for open air events, with stepped seating, lawns, grass terracing and a meadow area.

Freedom of the borough 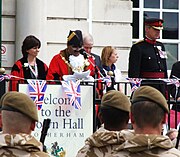 The Mayor of Rotherham and Col Newton of Yorkshire Regiment

On Monday 3 August 2009 Rotherham became the first town to bestow the Freedom of the Borough on the Yorkshire Regiment, giving it the right to march through the town with "flags flying, bands playing and bayonets fixed". At a ceremony outside the Town Hall, the Regiment paraded two Guards of soldiers who had recently returned from Iraq and the Colours of the 3rd Battalion Yorkshire Regiment (Duke of Wellington's), led by the Kings Division Band, under the command of Lieutenant Colonel Vallings, the battalion commanding officer. The regiment is the only military unit to become Honorary Freemen of the Borough.