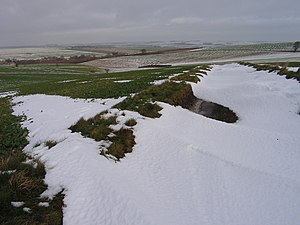 A winter view across the Yorkshire Wolds

On the western edge the Wolds rise to an escarpment which then drops sharply to the Vale of York. The highest point on the escarpment is Bishop Wilton Wold. To the north, on the other side of the Vale of Pickering, lie the North York Moors, and to the east the hills flatten into the plain of Holderness.

The largest town in the Wolds is Driffield, with other places including Pocklington, Thixendale and Kilham, the original capital of the Wolds. The highest village on the Yorkshire Wolds is Fridaythorpe at 550 feet above sea level.

The hills are formed from chalk, and make an arc from the Humber estuary west of Kingston upon Hull up to the North Sea coast between Bridlington and Scarborough. Here they rise up to form cliffs, most notably at Flamborough, Bempton Cliffs and Filey; Flamborough Headland is designated a Heritage Coast. On the other side of the Humber, the chalk formations continue as the Lincolnshire Wolds; in fact, one can view the Humber as cutting through a single formation. The Humber Bridge was built at the point due to its geological stability.

Most of the area takes the form of an elevated, gently rolling plateau, cut by numerous deep, steep-sided, flat-bottomed valleys of glacial origin. The chalk formation of the hills provides exceptionally good drainage, with the result that most of these valleys are dry; indeed, surface water is quite scarce throughout the Wolds. Typically the valleys are hard to see from above, creating the visual impression that the landscape is much flatter than is actually the case. The unusual topography results in an "upside-down" farming system – livestock (mostly sheep and cows) graze the valleys, with the hills above used for crops.

The land and its villages

The Northern Wolds and Flamborough Head

The Wolds reach the sea at Flamborough Head where the chalk cliffs plunge over 420 feet to the North Sea.[1] To the south of Flamborough lies the resort town of Bridlington and to the north the sheer cliffs at Speeton overlook Filey Bay. Inland the high Wolds scarp overlooks the Vale of Pickering.

The so-called Great Wold Valley traverses the area. It is occupied by a small stream called the Gypsey Race. This stream empties its waters into Bridlington harbour. The valley of the Gypsey Race turns south and then east in two right angle bends, one at Burton Fleming, the other at Rudston. In dry conditions the stream frequently dries up in parts of its course and re-emerges downstream.

Another notable feature of this area of the Wolds is Danes Dyke, a great ditch extending across Flamborough Head. The dyke consists of double ramparts, a ditch which is about sixty feet wide and twenty feet deep and a further rampart which rises to eighteen feet above ground level. The origin of this feature is obscure although it is certainly not Danish.[2]

Bempton Cliffs is a seabird colony and an R.S.P.B. nature reserve. 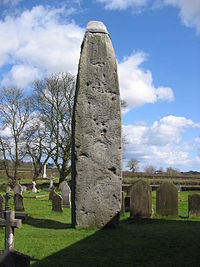 Above Flamborough, North Landing and South Landing are hamlets on Flamborough Headland. The village of Reighton which extends down the steep scarp face of the Wolds has many buildings made of the local chalk. Hunmanby was once a large market town and its buildings are centred on the old triangular market place.

A series of villages lies at the foot of the northern scarp of the Wolds each having a parish which contains an area of chalk hillside, fertile benches and marshy land on the Vale of Pickering.

A large round barrow called Willy Howe (from the Old Norse word haugr meaning a small hill) sits between Wold Newton and Thwing. At Rudston Britain's tallest standing stone can be seen in the church yard.[3] Boynton Hall was the home of William Strickland who is reputed to have brought turkeys to Britain.[3] On the Wold top there are many traces of pre-historic peoples such as the barrows at Willerby Wold and Sharpe Howes above Folkton.[2]

On the seaward dip slope of the Wolds there is a series of villages extending from Bridlington to Driffield. These mark the spring line and the natural boundary between the chalk Wolds and the clay of Holderness. Driffield lies central to the crescent shape of the Wolds area and since all of the Wolds are within easy reach it has become an important market town and is known as the Capital of the Wolds. 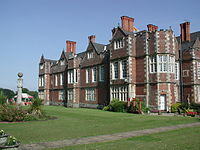 At Nafferton, just off the A166, is a pretty mill pond fed by springs. Close to Ruston Parva is Danes Graves, an archaeological site consisting of some 500 small round barrows marking Iron Age burials at least one of which yielded a corpse buried with a chariot and harness.[2] At Burton Agnes are the ruins of a manor house dating from 1170 AD and a fine Hall and gatehouse of the Elizabethan period. Kilham was a prosperous market town in the Middle Ages but was superseded by Driffield in the 19th century as chief town of the Wolds. In this area there is a long continuity of settlement with an Iron Age cemetery, the Roman road now known as Woldgate and an Anglo-Saxon cemetery all in close proximity. Sledmere village has a uniformity of aspect which reveals its history as an 'estate' village. Close by is Sledmere House, the home of the Sykes family since the 18th century.

This area has fine agricultural land and many attractive villages, notable amongst which are: Walkington with its village pond and church of All Hallows: Bishop Burton which lies in a green hollow and has 19th century whitewashed cottages close to a village green with a large pond: Cherry Burton sits in a shallow valley in the shadow of the beautiful St Michael's and All Angels Church: Skidby which has an intact working windmill dating from 1821 which is now an agricultural museum.[3] North Newbald is sited in a narrow valley on the western scarp of the Wolds and has a famous cruciform Norman church dedicated to St Nicholas.[2]

The western scarp of the Wolds reaches is highest point at Garrowby Hill. It is well dissected and attractive wooded dales occur along the scarp with small becks flowing down to the Vale of York below. The market towns of Pocklington and Market Weighton are sited between the wolds and the vale. Large parks and houses lie along the scarp from Garrowby Hall to Kilnwick Percy, Warter Priory and Londesborough Hall.

Millington has a beautiful situation within Millington Dale and the road leading along the brow of the dale is particularly scenic. The village of Kiplingcotes is the location for the annual Kiplingcotes Derby horse race, said to be the oldest horse race in Britain.[4] The 490th event took place on 19 March 2009.[5] 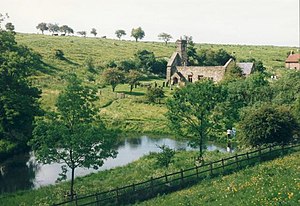 From Garrowby Hill northwards to Ganton the high scarp of the Wolds swings in a crescent to overlook the Vales of York and Pickering. Villages tend to be clustered along the scarp foot or in the upper part of the Great Wold Valley. Rillington is an attractive village with a stream passing through and a nearby park at Scampston. At Knapton village there is a hall and park and above the village in Knapton Plantation is Staple Howe, an Iron Age site.[2] The twin villages of East and West Heslerton lie further along the A64 road.West Heslerton is a well known archaeological site, from which artefacts from several eras have been recovered.

The Wolds area is rich in archaeological remains. There is a profusion of Neolithic, Bronze Age and Romano-British sites extending across the entire Yorkshire Wolds area.[6] The availability of fertile chalk soils, good grazing and the light tree cover along with stone suitable for making tools made this area attractive to early Neolithic settlers.[6]

Along with Wessex and Orkney, the Yorkshire Wolds is a key area for studying the development of the Neolithic period in the British Isles as it became a major focus for settlement in this era. Isolated farms rather than settlements of any size appear to have been the normal dwelling types however few have been located with any certainty and most evidence is of funerary sites and ritual monuments. Recently excavated long barrows at Fordon on Willerby Wold and at Kilham have been carbon dated to around 3700 B.C. A well-known round barrow of this period is the monumental Duggleby Howe, at the western end of the Great Wolds Valley, partially excavated in 1890 by J.R. Mortimer. A henge monument of the Neolithic has been identified at Maidens Grave Rudston and the Rudston Monolith has also been assigned to this period. An extensive Neolithic ritual complex, the main elements of which are four large cursus monuments and a henge, is situated near the eastern end of the Great Wold Valley.

More than 1,400 Bronze Age round barrows, comprising one or more burials and accompanied by items of grave goods, are known to exist on the Yorkshire Wolds. They occur either in isolation or, more commonly, grouped together to form cemeteries. Many of these sites, although they have been reduced in size by repeated ploughing, still form upstanding and, in some cases, prominent features in the present-day landscape.[6][7]

Roman remains are found along their road network. There are villa sites on the Wolds at Rudston, Harpham, Brantingham, Welton and Wharram-le-Street.[6]

Walkington Wold, near the village of Walkington in the southern area of the Wolds, is the site of an Anglo-Saxon execution cemetery, the only known example from the northern counties. [8]

The Yorkshire Wolds Way is a long-distance footpath which runs the length of the wolds from the Humber Bridge at Hessle to Filey on the coast.[9] It is managed by the Countryside Commission.