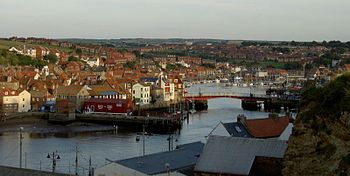 The Esk mouth at Whitby

The River Esk is a river of Yorkshire, a river of 28 miles from source to sea, during which course it carves Eskdale through the landscape of the North Riding.

The Esk is also the only major river in Yorkshire to drain directly into the North Sea.[1]

The river rises at the Esklets on Westerdale Moor in Cleveland Hills within the North Riding. It flows down through Westerdale before merging with a large number of becks from the surrounding hills, including Tower, Baysdale, Sleddale, Danby, Great Fryup, Stonegate, Glaisdale and Murk becks. Running east through the valley known as Eskdale it leaves the moors through the villages of Sleights and Ruswarp and reaches the North Sea three miles later by bisecting the fishing port and seaside resort of Whitby.

Between the junction of Fryupdale and Lealholm the river passes through a narrow, steep sided and wooded valley known as Crunkly Ghyll. Here the river drops 100 feet from the valley above to reach the village. Geologists propose that Crunkly Ghyll was formed during the last great Ice Age as a huge wall of ice moved across the landscape carving out what is now the Esk Valley as far as Lealholm. At its head it formed a massive dam blocking the flow of water from above and creating a lake running back up the valley to Commondale. As the ice melted, the river forced its way out carving the ravine we see today. In Victorian times, the Ghyll was home to a large rockery garden, open to the public, but long since washed away by flooding of the river.

The small villages along the river were at one time of great industrial importance to the Northeast, with coal. mined in the valleys, and iron ore dug from quarries on the surrounding moors. Today, all that remains are the deserted mine shafts, though potash is mined, near Boulby, with tunnels running six miles beneath the sea, some of the deepest in Britain.

Due to its rural nature, the river is clean and healthy, supporting a wealth of wildlife. Salmon spawn right up through Eskdale, and a number of "leaps" are provided to enable them to travel through weirs on the course. There are clearly visible examples at Ruswarp, where the tidal stretch through to Whitby begins and at Sleights. Around Whitby the Esk has a large population of sea trout, and the river is noted for freshwater pearl mussels, although these are threatened with extinction due to buildups of silt in the river.[2]

Villages on the Esk

From source, the esk passes through or by:

The Esk Valley Walk runs along part of the length of the river.