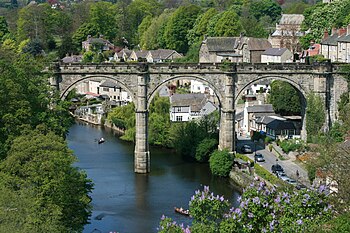 Railway Viaduct over the Nidd at Knaresborough

The River Nidd is a pretty river of the West Riding of Yorkshire, 59 miles long, rising in the Pennines and which becomes a tributary of the River Ouse.

In its first few miles, the Nidd is dammed three times to create Angram Reservoir, Scar House Reservoir and Gouthwaite Reservoir, but even these artificial bodies of water attract around 150,000 visitors a year. The Nidd can overflow the reservoirs, flooding the caves in the valley, in which case the river then flows along the normally dry river bed past Lofthouse through to Gouthwaite Reservoir. The Yorkshire Dales Rivers Trust has a remit to conserve the ecological condition of the river Nidd from its headwaters to the Humber estuary.[1]

The river's name is believed to be from the ancient British language, from a word meaning brilliant.[2]

The river valley, Nidderdale, was designated an Area of Outstanding Natural Beauty in 1994.

The Nidd rises in Nidderdale at Nidd Head Spring on the slopes of Great Whernside in the Yorkshire Dales. It flows east into Angram and Scar House Reservoirs before turning south at Bracken Ridge.

The river disappears underground into Manchester Hole (pot hole which, in prolonged dry weather, leaves the river bed totally exposed before normal water flow resumes to the south of the village of Lofthouse. The river turns south south east towards Ramsgill before flowing into Gouthwaite Reservoir.

Continuing on the same heading, the first sizable village the river reaches is Pateley Bridge. Turning more south easterly it flows past Glasshouses and Summerbridge, where it turns south again past Dacre Bank. Passing by Darley, the river turns east before reaching Birstwith where it flows southeast to Hampsthwaite.

A series of large bends in the river take the flow north, east and then south and then east again to Scotton Banks. From here it meanders south east around the town of Knaresborough, between it and Harrogate, then heading north and looping south again. Near Little Ribston it meanders south easterly and easterly crossing underneath the A1 and the A1(M) near the small village of Cowthorpe. The river continues meandering past Cattal north easterly towards Moor Monkton towards its junction with the River Ouse at Nun Monkton.

The two more northerly reservoirs on the course of the river were built to provide water to the Bradford area in the early 1900s. As of 2011, they are maintained by Yorkshire Water.

The reservoir takes its name from Angram, a settlement in the township of Stonebeck Up, submerged when the reservoir was built. Completed in 1919 with a dam height of 200 feet covering 84 acres with a volume of 1,041 million gallons and a depth of 110 feet.

A temporary village was built at Scar House to house the workers building the reservoirs and some remains can still be seen. The old Village Hall, was moved to Darley, where it now serves as the local Village Hall. The dam at Scar House was completed in 1936. The dam height is 233 feet with the reservoir covering area 173 acres and a depth of 119 feet giving a volume of 2,200 million gallons. The reservoir is fed almost exclusively from the Angram dam.

Gouthwaite reservoir is designated a Site for Special Scientific Interest. It provides a compensation release for the river.

Along the river valley can be found the Nidderdale Museum, which is located in Pateley Bridge, and features sections about the traditional agriculture, industries, religion, transport and costume of Nidderdale.

There are many way-marked walking routes throughout the river valley, including the Nidderdale Way, a 53-mile circular walk starting and finishing in Pateley Bridge which follows the river for all but a short diversion to Ripley.