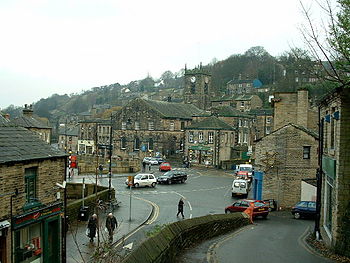 The West Riding of the county of York is the largest and most populous of Yorkshire's three ridings and the Riding with the greatest internal contrast. It consists of a largely urban south and a rural north, though the division is not clear cut; in among the industrial towns in the south of the Riding are many picturesque villages giving the quintessence of the ordinary Briton's understanding of Yorkshire.

Leeds is Yorkshire's commercial and financial centre and its largest town. It stands at the heart of the West Riding. It is an ancient town but its rapid growth has only been since the industrial revolution, building itself first on wool manufacturing but then with all industry. Close by are its sister towns, Bradford and Wakefield.

South of these two great cities and many other industrial towns, the whole area knotted in A-roads and motorways. South of the Leeds and Bradford area is another major city; Sheffield, the steel town, built on seven hills and spilling over into Derbyshire. Doncaster, another industrial town, lies north-eastward.

The dales and Pennines

Away from the urban growth in the south of the Riding, the West Riding shows its best parts. Some of the loveliest of the Yorkshire Dales are in the West Riding, including Nidderdale and Wharfedale.

In the northwest the Riding scales the Pennines, including the peaks of Ingleborough, Pen-y-Ghent, and Great Whernside. The West Riding stretches out to Sedbergh, only some fifteen miles from the west coast.

Craven is a distinctive area of limestone hills. It is popular among cavers. The Bowland Forest is a high moorland plateau from which becks flow both east and west. 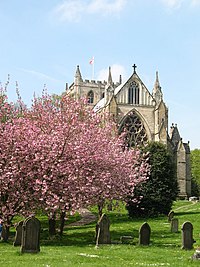 Leeds is Yorkshire's commercial and financial centre and its largest town. It stands at the heart of the West Riding. It is an ancient town with its wealth long built on wool. With the arrival of industrial techniques in the early nineteenth century, the West Riding weavers became industrial concerns and the town become swollen with new growth swiftly.

Wakefield to the south, likewise built on wool, became a rival, blessed with better road and rail connections, but has not surpassed Leeds.

Bradford to the west of Leeds has grown towards its neighbour almost forming a contiguous conurbation.

Sheffield in the south of the West Riding has been an industrial town since the middle ages, but its wealth has not come from wool as in the rest of the West Riding; it is famous for its steel. The most deadly of blades carried by the miller of Trumpington in Chaucer's The Reeve's Tale was a "Sheffield þwitel", and the town was long “the cutlers' town”. Built on steel and the coal underneath which powers its mills, and with new techniques invented by its forgemasters, the nineteenth century saw explosive growth, hard steel made now not for knives and forks but for rails, ships, driveshafts, machines and all the panoply of the new age. The city climbed unchecked over the steep slopes of its seven hills and spilling over into Derbyshire.

Doncaster, downstream of Sheffield, is another large town, though a little quieter. It is perhaps best known for horseracing.

Harrogate grew as a spa town from the Victorian period and is still popular with genteel visitors.

Ilkley too, north-west of Leeds, is a popular spot, albeit better known for the apparent goings-on on Ilkley Moor according to the song.

Ripon on the River Ure in the rolling rural part of the West Riding stands on its own. A modest city, it has with a fine cathedral, once the seat of the Diocese of Ripon and now one of the three cathedrals of the Diocese of Leeds. Ripon Cathedral was built over four centuries, beginning in the 13th, but it has remarkably early foundations; the crypt is early Anglo-Saxon work, belonging to a grand basilica church founded in 672 by the redoubtable Wilfred, Archbishop of York.

Sedbergh sits among the high hills at the westernmost edge of Yorkshire, close to the border with Westmorland. Presiding over the foot of the Howgill Fells on the River Rawthey, Sedbergh has no near neighbour towns.

The wapentakes of the West Riding are:

The Kingdom of Elmet (Welsh: Elfed) is remembered in a scattering of place-names in the West Riding; Barwick-in-Elmet, Scholes-in-Elmet, Sherburn-in-Elmet, and local Parliamentary constituency. This was, according to Bede, a Welsh (or rather native British) kingdom surviving in the hills in the midst of the expanding English kingdom around it, perhaps a precursor of the West Riding itself, sitting on the same dales and on the same hills. Its borders though are uncertain. Some have suggested the regio Loidis (the region of Leeds) mentioned by Bede elsewhere was Elmet itself, but the land is long lost and we can never know.

Elmet was finally subdued by the Northumbrians in the early seventh century.