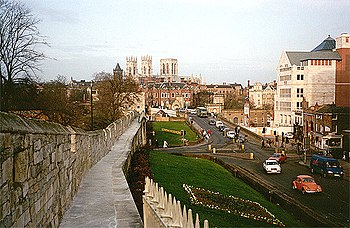 The city wall near the railway station

York City Walls represent the longest extent of intact city walls in the British Isles. The walls contain a mixture of ages, from Roman work to Victorian restoration work. They almost wholly surround the heart of the City of York, on both sides of the River Ouse.

Since Roman times, York, known to the Romans as Eboracum, has been defended by walls of one form or another. To this day, most of the walls' original length remains. The walls are known variously as York City Walls, the Bar Walls and the Roman walls (though this last is more hopeful than accurate, as very little of the extant stonework is of Roman origin).

The original walls were built around AD 71, when the Romans erected a fort (castra) occupying about 50 acres near the banks of the River Ouse. The rectangle of walls was built as part of the fort's defences. The foundations and the line of about half of these Roman walls form part of the existing walls, as follows:

The line of the rest of the Roman wall went south-west from the east corner, crossing the via principalis of the fortress where King's Square is now located. The south corner was in what is now Feasegate, and from here the wall continued northwest to the west corner. The point where the wall crossed the via praetoria is marked by a plaque in St Helen's Square near the Mansion House. 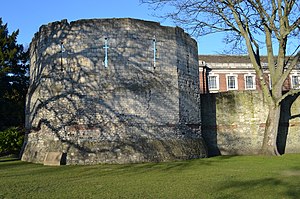 The Multangular Tower in the Museum Gardens is the most noticeable and intact structure remaining from the Roman walls. It was constructed as part of a series of eight similar defensive towers. The walls are almost certainly the creation of Septimius Severus; however, the Multangular Tower is probably a later addition of Constantine the Great around AD 310–320. It has ten sides, based on a regular fourteen-sided figure designed so that a circle through the internal angles of the internal face is tangential to the curve.[1] The rear four sides are missing to provide access to the interior of the tower.

A low plinth or skirt extends out from the lowest course. It stands almost 30 feet tall, has an external diameter of 48½ ft at the base and 46 feet above the skirt.[1] Length of each side varies from 7½ feet to 11 feet on the inner face.[1] The tower projects beyond the curtain wall to a distance of 36 feet 9 inches.[1] The foundations are concrete, atop which the tower extends having a rubble and mortar core between ashlar faced courses of small magnesian limestone blocks.[1] At 15 feet a scarcement reduces the thickness of the wall from 5 feet to 3 feet three inches, which continues for a further 4 feet before being capped by 11 feet of 13th century masonry[1] in which arrowslits can be seen.

The Middle Ages and Modernity 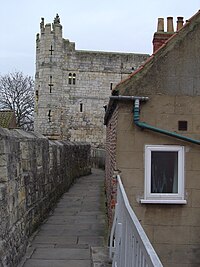 Norsemen occupied the city in 867. By this time the Roman defences were in poor repair, and these Vikings demolished all the towers save the Multangular Tower and restored the walls.

The majority of the remaining walls, which encircle the whole of the mediæval city, date from the 12th – 14th century From the east corner of the Roman walls, the mediæval wall extends to Layerthorpe Bridge. After the bridge, the King's Fishpool, a swamp created by the Normans' damming of the River Foss, provided adequate security for the city, and no walls were ever built in this area.

The walls resume beyond the now canalised Foss at the Red Tower, a brick building which has been much restored over the years. They continue south and west around the Walmgate area, terminating in another tower (Fishergate Postern), near York Castle, which was formerly surrounded by its own walls and a moat.

A small stretch of wall on the west side of Tower Gardens terminates at Davy Tower, another brick tower located next to the River Ouse. This originally ran up to the castle walls, with a postern on Tower Street.

Beyond the Ouse, the walls resume at Skeldergate, where there was once another postern. They climb past Baile Hill, take a right turn and proceed north-west parallel to the Inner Ring Road. Near the railway station, they turn right again in a north-easterly direction, finishing at Barker Tower on the Ouse.

Barker Tower was once linked by a chain across the river, parallel to the 19th-century Lendal Bridge. A small stretch of wall then leads to the entrance to Museum Gardens, the Multangular Tower and the original line of the Roman walls.

Today the walls are a scheduled ancient monument and a grade I listed building.[2]

The walls were repaired during the Civil War by Parliamentarians[3] as well as during the later Jacobite Risings [4] due to fears of an invasion from Scotland. They were later restored in the Victorian period after falling into disrepair. 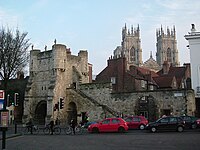 Bootham Bar in the shadow of York Minster 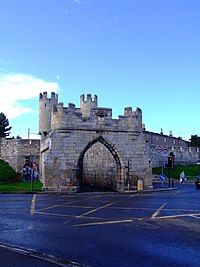 Walmgate Bar with its barbican

The walls are punctuated by four main gatehouses, or 'bars', (Bootham Bar, Monk Bar, Walmgate Bar and Micklegate Bar below). These restricted traffic in mediæval times, and were used to extract tolls, as well as being defensive positions in times of war.

Although much of Bootham Bar was built in the 14th and 19th centuries, it also has some of the oldest surviving stonework, dating to the 11th century. It stands almost on the site of porta principalis dextra, the north western gate of Eboracum. It was named in the 12th century as barram de Bootham, meaning bar at the booths, after the nearby market booths. It was the last of the bars to lose its barbican, which was removed in 1835. 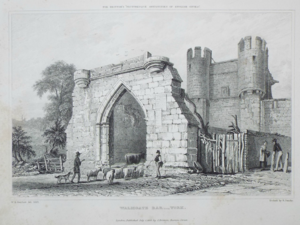 Walmgate Bar in the 1820s before restoration

Monk Bar is a four-storey gatehouse, and the tallest and most elaborate of the four bars. It was built in the early 14th century and was intended as a self-contained fort: each floor is capable of being defended separately. The current gatehouse was built to replace a 12th-century gate known as Munecagate, which stood 100 yards to the north-west, on the site of the Roman gate porta decumana – that location is indicated by a slight dip in the earth rampart.[5][6] Today, Monk Bar houses a museum called the Richard III Experience at Monk Bar[7] and retains its portcullis in working order.

Most of Walmgate Bar was built during the 14th century, although the inner gateway dates from the 12th century. It was originally called Walbegate, the word Walbe possibly being an Anglo-Scandinavian personal name. The Bar's most notable feature is its barbican, which is the only one surviving on a town gate in England. It also retains its portcullis and 15th century oak doors. On the inner side, an Elizabethan house, supported by stone Tuscan order columns (originally of Roman origin but modified in 1584), extends out over the gateway. The house was occupied until 1957.[8]

The Bar has been repaired and restored many times over the years, most notably in 1648, following the 1644 Siege of York in the Civil War when it was bombarded by cannon fire, and in 1840 after it had suffered years of neglect. It was also damaged in 1489 when, along with Fishergate Bar, it was burnt by rebels who were rioting over tax raises. 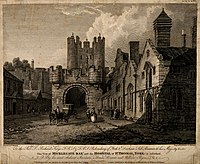 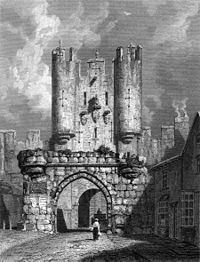 The name of this four-storey-high gatehouse is from the Old Norse 'mykla gata' or 'great street', and leads onto Micklegate. It was the traditional ceremonial gate for monarchs entering the city, who, in a tradition dating to Richard II in 1389, touch the state sword when entering the gate.

The lower section was built in the 12th century while the top storeys in the 14th; the original barbican was removed in 1826. At least six reigning monarchs passed through this gate.[9] Its symbolic value led to traitors' severed heads being displayed on the defences. Heads left there to rot included: Henry Hotspur Percy (1403), Henry Scrope, 3rd Baron Scrope of Masham (1415), Richard Plantagenet, 3rd Duke of York (1461), and Thomas Percy, 7th Earl of Northumberland (1572).

The Bar was inhabited until the 20th century. The upper two floors contain living quarters, which today are a museum known as the Henry VII Experience at Micklegate Bar.[10] A restoration of the Bar was completed in late 2017.[11]

Besides the four main bars, there are two smaller bars.

This Bar originally dates from around 1315, when it was documented as being called Barram Fishergate.[12] It was bricked up following riots in 1489, but was reopened in 1827 and today provides pedestrian access through the walls between the Fishergate area (actually Fawcett Street/Paragon Street) and George Street.

As the name suggests, this bar is a 19th-century addition to the walls. It was opened in 1838 to provide direct access between Nunnery Lane and Bishophill. However, during its construction the remains of an ancient gateway were found beneath it. This was probably the gateway known in the 12th century as the lounelith or secluded gateway[13] (in comparison to Micklegate Bar or the great bar located four hundred yards away). This was a small entrance to the city which dated back to early mediæval times but was blocked up later with earth and stone, possibly during the period when the walls consisted solely of a wooden palisade before they were rebuilt in stone (from around 1250).