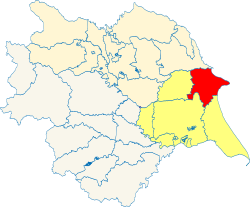 Dickering Wapentake shown within the East Riding and Yorkshire

Dickering is a wapentake of the East Riding of Yorkshire consisting of the north-eastern part of the riding, including the towns of Bridlington and Filey. It is bordered by Holderness to the south, Buckrose to the west and Harthill to the south. It had a population of 56,567 in 2011.

Dickering consists of the ancient parishes of: