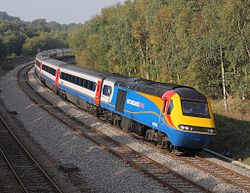 The Midland Main Line is a major railway line in from London to Sheffield. (map) The line comprises the lines from London's St Pancras station via Leicester, Derby/Nottingham and Chesterfield in the eastern Midlands.

The section between St Pancras and Bedford is electrified and forms the northern half of the Thameslink cross-London service, with a fast service to Brighton and other suburban services.

A northern part of the route, between Derby and Chesterfield, also forms part of the Cross Country Route. Tracks from Nottingham to Leeds via Barnsley and Sheffield are shared with local and regional services. 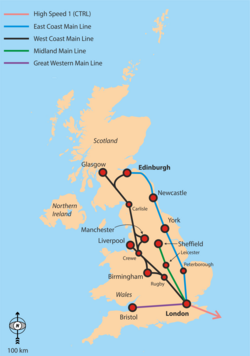 Overview of the Midland Main Line in green. In relation to other north-south main lines 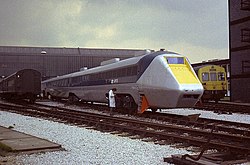 The Midland Main Line was built in stages between the 1830s and the 1870s. The earliest section was opened by the Midland Counties Railway between Nottingham and Derby on 4 June 1839.[1] On 5 May 1840 the section of the route from Trent Junction to Leicester was opened.[2]

The line at Derby was joined on 1 July 1840 by the North Midland Railway to Leeds Hunslet Lane via Chesterfield, Rotherham Masborough[n 1], Swinton and Normanton.

Without its own route to London, the Midland Railway relied upon a junction at Rugby with the London and Birmingham Railway line for access to the capital at London Euston. By the 1850s the junction at Rugby had become severely congested. The Midland Railway employed Thomas Brassey to construct a new route from Leicester to Hitchin via Kettering, Wellingborough and Bedford.[3] giving access to London via the Great Northern Railway from Hitchin. The Crimean War resulted in a shortage of labour and finance, and only £900,000 was available for the construction, approximately £15,000 for each mile.[4] To reduce construction costs the railway followed natural contours, resulting in many curves and gradients. Seven bridges and one tunnel were required, with 60 ft cuttings at Desborough and Sharnbrook. There are also major summits at Kibworth, Desbrough and at Sharnbrook where a 1-in-119 gradient from the south over three miles takes the line to 340 ft above sea level. This route opened for coal traffic on 15 April 1857, goods on 4 May and passengers on 8 May[5] and the section between Leicester and Bedford is still part of the Midland Main Line.

While this took some of the pressure off the route through Rugby, the GNR insisted that passengers for London alight at Hitchin, buying tickets in the short time available, to catch a GNR train to finish their journey. James Allport arranged a seven-year deal with the GN to run into Kings Cross for a guaranteed £20,000 a year. Through services to London were introduced in February 1858.[6]

This line met with similar capacity problems at Hitchin as the former route via Rugby, so a new line was constructed from Bedford via Luton to St Pancras[7] which opened on 1 October 1868.[4] The construction of the London extension cost £9 million[8]

As traffic built up, the Midland opened a new deviation just north of Market Harborough railway station on 26 June 1885 to remove the flat crossing of the Rugby and Stamford Railway.[9]

Plans by the Midland Railway to build a direct line from Derby to Manchester were thwarted in 1863 by the builders of the Buxton line who sought to monopolise on the West Coast Main Line.

In 1870 the Midland Railway opened a new route from Chesterfield to Rotherham which went through Sheffield.

The mid-1870s saw the Midland line extended northwards through the Yorkshire Dales and Eden Valley on what is now called the Settle–Carlisle line.

Before the line closures of the Beeching era, the lines to Buxton and via Millers Dale during most years presented an alternate (and competing) main line from London to Manchester, carrying named expresses such as The Palatine and the "Blue Pullman" diesel powered Manchester - London service ( the "Midland Pullman"). Express trains to Leeds and Scotland such as the Thames–Clyde Express mainly used the Midland's corollary Erewash Valley line, returned to it then used the Settle–Carlisle line. Expresses to Edinburgh Waverley, such as The Waverley travelled through Corby and Nottingham.

Under British Railways and privatisation

Most Leicester-Nottingham local passenger trains were taken over by diesel units from 14 April 1958, taking about 51 minutes between the two cities.[10]

When the Great Central Main Line closed in 1966, the Midland became the only direct main-line rail link between London and the East Midlands and the southern parts of Yorkshire.

The Beeching cuts and electrification of the West Coast Main Line brought an end to the marginally longer London–Manchester service via Sheffield.

In 1977 the Parliamentary Select Committee on Nationalised Industries recommended considering electrification of more of Britain's rail network, and by 1979 BR presented a range of options that included electrifying the Midland Main Line from London to Yorkshire by 2000.[11] By 1983 the line had been electrified from Moorgate to Bedford, but proposals to continue electrification to Nottingham and Sheffield were not implemented. 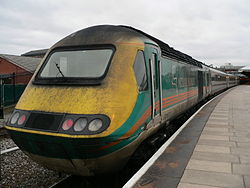 A Midland Mainline High Speed Train, introduced in 1983 by British Rail, at Nottingham in 2005

The introduction of the High Speed Train (HST) in May 1983, following the Leicester area resignalling, brought about an increase of the ruling line speed on the fast lines from 90mph to 110mph.

Between 2001 and 2003 the line between Derby and Sheffield was upgraded from 100mph to 110mph as part of Operation Princess, the CrossCountry route upgrade.

In January 2009 a new station, East Midlands Parkway, was opened between Loughborough and Trent Junction, to act as a park-and-ride station for suburban travellers from the eastern Midland cities and to serve nearby East Midlands Airport.[12]

Most recently 125mph running has been introduced on extended stretches. Improved signalling, increased number of tracks and the revival of proposals to extend electrification from Bedford to Sheffield are underway. Much of this £70 million upgrade, including some line-speed increases, came online on 9 December 2013[13] (see below).

The term Midland Main Line has been used from the late 1840s to describe any route of the Midland Railway on which express trains were operated.

It is first recorded in print in 1848 in Bradshaw's railway almanack of that year.[14] In 1849 it begins to be mentioned regularly in newspapers such as the Derby Mercury.[15]

In 1867 the Birmingham Journal uses the term to describe the new railway running into St Pancras railway station.[16]

In 1868 the term was used to describe the Midland Railway main route from North to South through Sheffield[17] and also on routes to Manchester, Leeds and Carlisle.

From south to north: