Barnsley is a town in the West Riding of Yorkshire. It stands on the River Dearne, 12 miles north of Sheffield, 17 miles south of Leeds and 14½ miles west of Doncaster.

Barnsley is known as a former industrial town once centred on coal mining and glassmaking [1] although in the town few factories remain, notably the glassworks and coking plant. Though these industries declined in the 20th century, Barnsley's local culture remains rooted in this industrial heritage; Barnsley has a tradition of brass bands, originally created as social clubs for its mining communities.

The earliest surviving written reference to Barnsley is in 1086 in the Domesday Book, in which it is called 'Berneslai' and has a population of around 200. The origin of the name Barnsley is subject to debate, but Barnsley Council claims that its origins lie in the Saxon word "Berne", for barn or storehouse, and "Lay, for field. It might likewise be bearnes leag ("child's" / "son's" field) or 'beornes leag ("warrior's field").

The town lay in the parish of Silkstone and developed little until in the 1150s when it was given to the monastery of St John, Pontefract. The monks built a new town where three roads met: the Sheffield to Wakefield, Rotherham to Huddersfield and Cheshire to Doncaster routes. The Domesday village became known as "Old Barnsley", and a town grew up on the new site.[2]

The monks erected a chapel-of-ease dedicated to Saint Mary, which survived until 1820, and established a market. In 1249, a Royal Charter was granted to Barnsley permitting it to hold a weekly market on Wednesdays and annual four-day fair at Michaelmas. By the 1290s, three annual fairs were held. The town was the centre of the Staincross Wapentake, but in the mid-16th century it still had only 600 inhabitants.[2]

From the 17th century, Barnsley developed into a stop-off point on the route between Leeds, Wakefield, Sheffield and London. The traffic generated as a result of its location fuelled trade, with hostelries and related services prospering. A principal centre for linen weaving during the 18th and 19th century, Barnsley grew into an important manufacturing town. Barnsley has a long tradition of glass-making,[1] but is most famous for its coal mines.

George Orwell mentions the town in The Road to Wigan Pier. He spent a number of days in the town living in the houses of the working-class miners while researching for the book. He wrote very critically of the council's expenditure on the construction of Barnsley Town Hall and claimed that the money should have been spent on improving the housing and living conditions of the local miners.

The town was known for coal mining, although most of the pits were in the surrounding villages, rather than the town itself. The proportion employed in mining varied. All the mines in the borough are now: Goldthorpe was the last to close, in 1994. Wire, linen and glass making were also major industries, but only glass making remains, with one company still operating. The coat of arms for the town has both a coal miner and a glass-blower supporting a shield and depicting local families and other industries, above a ribbon bearing the town's motto, Spectemur agendo.

Barnsley is now moving towards a service economy, and it is in a far better state than some of the other deindustrialised towns of the West Riding.

Significant industrial employers include the Ardagh Glass Group; part of a long glassmaking tradition in Barnsley.

A large part of Barnsley town centre was rebuilt during the 1960s by council planners, in the manner of those days, which is considered cheap and ugly today. Where unsightliness came from bureaucrats, improvement has come from shopkeepers and developers. The main retail area is around Cheapside and May Day Green, the metropolitan centre. Other prominent areas include Queen Street, Market Street, Eldon Street and The Arcade, which houses the majority of the independent and designer retailers in Barnsley.

The town also has a large concentration of pubs and bars in the central district.

Development work on a new shopping centre began in the town centre in 2012.[3]

Author Chris Roberts quips that the "small town" of Barnsley is "a couple hundred miles north of London geographically, but several time zones away culturally".[4] This may not be considered a bad thing locally.

Barnsley is home to a tradition of brass bands, which were originally created as social clubs for the mining communities. Grimethorpe Colliery Band, located in Grimethorpe, 5 miles to the east of Barnsley, is perhaps the best known brass band in Britain. It rose to fame in the film Brassed Off and is now the 'artist in residence' at the Royal College of Music, London. The band has performed in Hyde Park during the Last Night of the Proms.

The 'Bard of Barnsley' Ian McMillan writes a column in the Barnsley Chronicle. He was nominated for a chair of poetry at Oxford University, and appears on BBC Radio 4. The Barnsley accent is starting to wear off amongst the younger generation, but it has generally been better maintained than most other Yorkshire accents. Some have started referring to Barnsley as Tarn.

Ken Loach's film Kes was set and filmed in several villages around Barnsley, including Lundwood and Monk Bretton, using local actors such as Freddie Fletcher.

The Lamproom Theatre has four theatrical companies, and showcases theatre in the town.

The Academy Theatre is part of the Take 2 Centre where performances range from comedy, West End performers, musicals and the traditional "An Evening With.....".[5] The Take 2 Centre has a recording studio, design and print studios, a theatre school and a music school.

The Civic, in Barnsley town centre is a multi-purpose performance venue in a Grade II listed building, 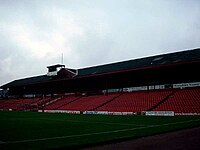