Pudsey is a market town in the West Riding of Yorkshire, found midway between Bradford and Leeds. It had a population of 32,391 in 2001.

Pudsey has, perhaps involuntarily, given its name to "Pudsey Bear", the mascot of the BBC's annual fundraising marathon Children in Need.

The name Pudsey is first recorded in the Domesday Book as Podechesaie and Podechesai, in 1086. Its original meaning is rather uncertain: the leading suggestion is from an unknown founder named "Pudoc" (perhaps a Welsh name, from the Kingdom of Elmet of which this place was once part) and so Pudoces ieg; "Pudoc's island", the 'island' a rise of good ground in the moor. Other possibilities have been suggested, however.[1]

The town was famous in the 18th and 19th centuries for wool manufacture, and, from the 19th century, for cricket. Yorkshire and England cricketers Sir Len Hutton, Herbert Sutcliffe, Ray Illingworth and Matthew Hoggard all learned to play in Pudsey. A 19th century Yorkshire cricketer, John Tunnicliffe, was born in Lowtown.

During the Industrial Revolution Pudsey was one of the most polluted areas of the land due to its position in a slight valley between the two industrial cities of Leeds and Bradford. As a result, whichever way the wind blew Pudsey became covered in thick soot. The temperature inversion created by the valley led to the soot becoming trapped leading to dense smogs. This is believed to have led to jokes that pigeons in Pudsey Park flew backwards in order to keep the soot out of their eyes. 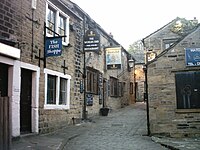 There are several recreational parks in Pudsey, the largest is Pudsey Park; features include Pets Corner, aquarium, bird houses, tropical greenhouse, a "Pudsey Bear" (made of vegetation) and a large play area for children. The park hosts the new West Leeds Country Park Visitor Centre. There is also Queens Park where the Pudsey carnival is held once a year.

Pudsey's market operates on Tuesday, Friday and Saturday.[2] Pudsey has also seen the introduction of a monthly farmers' market with a range of stalls selling meat, fish, dairy produce, organic fruit and vegetables, delicatessen and craft-ware.[3]

Pudsey town centre has many amenities and a shopping centre which include many high street chain stores and independent retailers. In keeping with many affluent areas it has its fair share of banks and estate agents.

Pudsey's historic town hall is benefiting from a new, energy-efficient lighting project to highlight its most interesting features. The multi-coloured lights can be changed to offer 255 different scenes.[4]

During the Easter weekend 2009, the Pudsey Business Forum launched the Pudsey Shop Local campaign. The campaign is to encourage local residents to shop more in Pudsey Town Centre. As part of this campaign they have launched a directory of all local shops.[5] The town's businesses have also introduced a Loyalty Scheme, aimed at local shoppers, believed to be the first of its kind in the country; shoppers collect stamps participating local shops for a prize draw, the prize to be spent in local shops.

There are many community groups working for the benefit of Pudsey, and their aim is simply to make their town a more attractive and interesting place to visit. One of these groups, established in 2002 is Pudsey in Bloom.

The community website This is Pudsey run by local residents aims to bring the community together by organising many events during the year and to help promote the local businesses, groups and organisations, everyone is welcome to become apart of the website and are welcome to use the Pudsey Community Forum, where residents can have there say on things that matter in the community.