Fountains Abbey is one of the largest and best preserved ruined Cistercian monasteries in Britain. It is to be found about three miles south-west of Ripon in the West Riding of Yorkshire, near the village of Aldfield. It stands within Studley Royal Park, providing a romantic ruin to beautify the estate.

Founded in 1132,[1] the abbey operated for over 400 years, until 1539, when Parliament and King Henry VIII ordered the Dissolution of the Monasteries.

The abbey is a Grade I listed building,[2] and is owned by the National Trust. It is part of a World Heritage Site named ‘Studley Royal Park including the Ruins of Fountains Abbey’.

After a dispute and riot in 1132 at St Mary's Abbey in York, a Benedictine house, thirteen monks were expelled (among them Robert of Newminster, later canonised) and, after unsuccessfully attempting to return to the early 6th-century Rule of St Benedict, were taken into the protection of Thurstan, Archbishop of York.[3] Thurstan provided them with land in the valley of the River Skell, a tributary of the Ure. The enclosed valley had all the natural features needed for the creation of a monastery, providing shelter from the weather, stone and timber for building, and a supply of running water.[4] After enduring a harsh winter in 1133, the monks applied to join the Cistercian order and in 1135 became the second house of that order in the northern counties, after Rievaulx. The monks subjected themselves to Clairvaux Abbey, in Burgundy which was under the rule of St Bernard. Under the guidance of Geoffrey of Ainai, a monk sent from Clairvaux, the group learned how to celebrate the seven Canonical Hours and were shown how to construct wooden buildings in accordance with Cistercian practice.[5][6]

In 1146 an angry mob, displeased with Murdac's role in opposing the election of William FitzHerbert to the archbishopric of York, attacked the abbey and burnt down all but the church and some surrounding buildings.[7] The community recovered swiftly from the attack and founded four daughter houses. Henry Murdac resigned the abbacy in 1147 to become the Archbishop of York and was replaced first by Maurice, Abbot of Rievaulx then, on the resignation of Maurice, by Thorald. Thorald was forced by Henry Murdac to resign after two years in office. The next abbot, Richard, held the post until his death in 1170 and restored the abbey's stability and prosperity. In 20 years as abbot, he supervised a huge building programme which involved completing repairs to the damaged church and building more accommodation for the increasing number of recruits. Only the chapter house was completed before he died and the work was ably continued by his successor, Robert of Pipewell, under whose rule the abbey gained a reputation for caring for the needy.

The next abbot was William who presided over the abbey from 1180 to 1190 and he was succeeded by Ralph Haget, who had entered Fountains at the age of 30 as a novice, after pursuing a military career. During the famine of 1194, Haget ordered the construction of shelters in the vicinity of the abbey and provided daily food rations to the poor enhancing the abbey's reputation for caring for the poor and attracting more grants from wealthy benefactors.

In the first half of the 13th century Fountains increased in reputation and prosperity under the next three abbots, John of York (1203–1211), John of Hessle (1211–1220) and John of Kent (1220–1247). They were burdened with an inordinate amount of administrative duties and increasing demands for money in taxation and levies but managed to complete another massive expansion of the abbey's buildings. This included enlarging the church and building an infirmary. In the second half of the 13th century the abbey was in more straitened circumstances. It was presided over by eleven abbots, and became financially unstable largely due to forward selling its wool crop, and the abbey was criticised for its dire material and physical state when it was visited by Archbishop John Romeyn in 1294. The run of disasters that befell the community continued into the early 14th century when northern England was invaded by the Scots and there were further demands for taxes. The culmination of these misfortunes was the Black Death of 1348–1349. The loss of manpower and income due to the ravages of the plague was almost ruinous.

As a result of the Papal Schism of 1378–1409. Fountains Abbey along with other English Cistercian houses was told to break off any contact with the mother house of Citeaux, which supported a rival pope, which resulted in an independent English section of the Cistercian Order, which descended into internecine politics. In 1410, following the death of Abbott Burley of Fountains, the community was riven by several years of turmoil over the election of his successor, which took five years to resolbe. Under abbots John Greenwell (1442–1471), Thomas Swinton (1471–8), John Darnton (1478–95), who undertook some much needed restoration of the fabric of the abbey including notable work on the church, and Marmaduke Huby (1495–1526) Fountains regained stability and prosperity.

Huby's successor, William Thirsk who was accused by the royal commissioners of immorality and inadequacy and dismissed from the abbacy and replaced by Marmaduke Bradley, a monk of the abbey who had reported Thirsk's supposed offences, testified against him and offered the authorities six hundred marks for the abbacy. This was the last gasp of the monasteries though, which had sunk into corruption and were a prime target for the reformers: in 1539 Bradley surrendered the abbey to the Crown when Parliament and King Henry VIII ordered the Dissolution of the Monasteries. 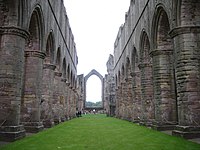 Interior of the abbey church

The abbey precinct covered 70 acres surrounded by an 11-foot wall built in the 13th century, some parts of which are visible to the south and west of the abbey. The area consists of three concentric zones cut by the River Skell flowing from west to east across the site. The church and claustral buildings stand at the centre of the precinct north of the Skell, the inner court containing the domestic buildings stretches down to the river and the outer court housing the industrial and agricultural buildings lies on the river's south bank. The early abbey buildings were added to and altered over time, causing deviations from the strict Cistercian type. Outside the walls were the abbey's granges.

The original abbey church was built of wood and "was probably" two-stories high; it was, however, quickly replaced in stone. The church was damaged in the attack on the abbey in 1146 and was rebuilt, in a larger scale, on the same site. Building work was completed c.1170.[8] This structure, completed around 1170, was 300 feet long and had 11 bays in the side aisles. A lantern tower was added at the crossing of the church in the late 12th century. The presbytery at the eastern end of the church was much altered in the 13th century.[9] The church's greatly lengthened choir, commenced by Abbot John of York, 1203–11, and carried on by his successor terminates, like that of Durham Cathedral, in an eastern transept, the work of Abbot John of Kent, 1220–47. The 160-foot tall tower, which was added not long before the dissolution, by Abbot Huby, 1494–1526, is in an unusual position at the northern end of the north transept and bears Huby's motto 'Soli Deo Honor et Gloria'. The sacristry adjoined the south transept.

The cloister, which had arcading of black marble from Nidderdale and white sandstone, is in the centre of the precinct and to the south of the church. The three-aisled chapter-house and parlour open from the eastern walk of the cloister and the refectory, with the kitchen and buttery attached, are at right angles to its southern walk. Parallel with the western walk is an immense vaulted substructure serving as cellars and store-rooms, which supported the dormitory of the conversi (lay brothers) above. This building extended across the river and at its south-west corner were the latrines, built above the swiftly flowing stream. The monks' dormitory was in its usual position above the chapter-house, to the south of the transept. Peculiarities of this arrangement include the position of the kitchen, between the refectory and calefactory, and of the infirmary above the river to the west, adjoining the guest-houses.

View of Fountains Abbey looking from west to south.
>

The abbot's house, one of the largest in all the land,[1] is located to the east of the latrine block, where portions of it are suspended on arches over the River Skell.[1] It was built in the mid-twelfth-century as a modest single-storey structure, then, from the fourteenth-century, underwent extensive expansion and remodelling to end up in the 16th century as a grand dwelling with fine bay windows and grand fireplaces. The great hall was an expansive room 171 feet by 69 feet.[1]

Among other apartments, for the designation of which see the ground-plan, was a domestic oratory or chapel, 46½ feet by 23 feet, and a kitchen, 50 feet by 38 feet. 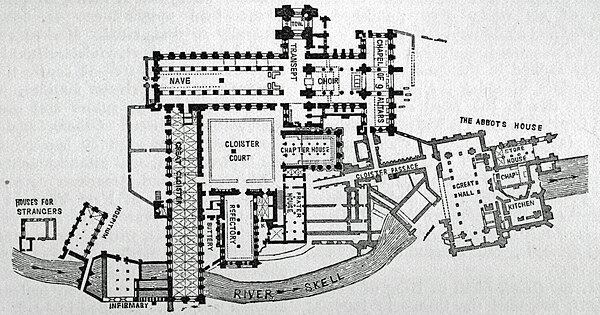 The Abbey buildings and over 500 acres of land were sold by the Crown, on 1 October 1540, to Sir Richard Gresham, the London merchant, father of the founder of the Royal Exchange in London, Sir Thomas Gresham.[4] Gresham sold some of the fabric of the site, stone, timber, lead, as building materials to help to defray the cost of purchase. The site was acquired in 1597 by Sir Stephen Proctor, who used stone from the monastic complex to build Fountains Hall. Between 1627 and 1767 the estate was owned by the Messenger family who sold it to William Aislaby who was responsible for combining it with the Studley Royal Estate.[10] The archaeological excavation of the site was begun under the supervision of John Richard Walbran, a Ripon antiquary who, in 1846, had published a paper On the Necessity of clearing out the Conventual Church of Fountains. In 1966 the Abbey was placed in the guardianship of the Department of the Environment and the estate was purchased by the West Riding County Council. The National Trust bought the 674-acre Fountains Abbey and Studley Royal estate from the successor council in 1983.

In 1986 the parkland in which the abbey is situated and the abbey was designated a World Heritage Site by UNESCO. It was recognised for fulfilling the criteria of being a masterpiece of human creative genius, and an outstanding example of a type of building or architectural or technological ensemble or landscape which illustrates significant stages in human history.

Fountains Abbey is owned by the National Trust and maintained by English Heritage. The trust owns Studley Royal Park, Fountains Hall, to which there is partial public access, and St Mary's Church, designed by William Burges and built around 1873, all of which are significant features of the World Heritage Site.[11]

The Porter's Lodge, which was once the gatehouse to the abbey, houses a modern exhibition area with displays about the history of Fountains Abbey and how the monks lived.

Productions filmed on location at the abbey include:[12]