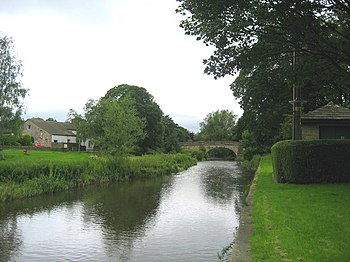 The River Aire at Gargrave

The River Aire is a major river in Yorkshire, 71 miles long. Part of the river is canalised, and is known as the Aire and Calder Navigation. It flows entirely though the West Riding of Yorkshire and in the hills it cuts a valey, Airedale, which forms one of the famed Yorkshire Dales

The Aire rises at Malham Tarn, flowing underground to Aire Head, near Malham, in the West Riding of Yorkshire, and then flows through Gargrave and Skipton. It passes through the former industrial areas of Keighley, Bingley, Saltaire and Shipley. It then passes through Leeds and on to the villages of Swillington and Woodlesford.

At Castleford is the confluence of the Aire and Calder; just downstream of the confluence was the ford where the ancient British road, used by the Romans, crossed on its way north to York. It passes Knottingley and in its lower reaches below the dale pass through the low lands of the West Riding.

The River Aire empties into the River Ouse at Airmyn, 'myn' being an Old English word for 'river mouth'.

The name "Aire" is possibly derived from the British language and a word reconstructed as *Isara, meaning "strong river". The Aire could have been the Winwæd written about in Old English, from the elements winnan or win ("strife", "fight") and wæd ("shallow water", "ford"). Others however have proposed that the Winwæd is the Went (also called the "wynt" in Old English) or the Cock Beck. Still others have claimed that it is actually the name of the battle and not the body of water itself.[1][2] 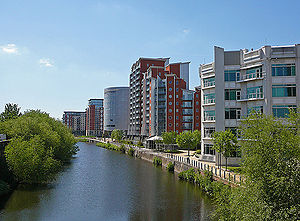