The airport was opened in October 1931 as Yeadon Aerodrome,[1] and is still often referred to as Yeadon Airport by locals. It is the largest airport in Yorkshire: it serves the whole county and specifically its cities of Leeds and Bradford.

The airport was owned by a group of local authorities until May 2007, when it was sold for £145.5 million to Bridgepoint Capital.[2]

Leeds Bradford has a CAA Public Use Aerodrome Licence (Number P800) that allows flights for the public transport of passengers and for flight training. The airport is also the highest in Britain, at an elevation of 681 feet above sea level.[3] By the number of passengers handled in 2015, Leeds Bradford was the 16th busiest airport in the UK. It is a base for Jet2.com, Monarch Airlines and Ryanair. Thomson Airways is seasonally based at the airport.

The airport was opened as the "Leeds and Bradford Municipal Aerodrome" (Yeadon Aerodrome) on 17 October 1931[4] and was operated by the Yorkshire Aeroplane Club on behalf of Leeds and Bradford Corporations. In 1935 the aerodrome was expanded by 35 acres and scheduled flights began on 8 April 1935 with a service by North Eastern Airways from London (Heston Aerodrome) to Newcastle upon Tyne (Cramlington). The service was soon extended to Edinburgh (Turnhouse). In June 1935 Blackpool and West Coast Air Services started a service to the Isle of Man.[5] By 1936 the London/Yeadon/Newcastle/Edinburgh service was flying three times a week and also stopped at Doncaster and carried on to Aberdeen (Dyce).

Seasonal flights between Yeadon and Liverpool began. Work also began on a terminal building, but progress was halted after only one section had been completed.

Civil aviation at Yeadon was halted in 1939, with the outbreak of the Second World War. Avro built a new shadow factory, to produce military aircraft, just to the north of the aerodrome;[6] a taxiway connected the factory to the aerodrome and many of the aircraft first flew from Yeadon.[7] Around 5,515 aircraft were produced and delivered from Yeadon of the following main types: Anson (over 4,500), Bristol Blenheim (250), Lancaster bomber (695), York (45) and the Lincoln (25).[8] the Avro factory was camouflaged and had dummy cows placed on top of the factory so that from the air it would look just like fields with cattle.[7]

Significant improvements were made to the aerodrome; the addition of two runways, taxiways and extra hangarage led to Yeadon's becoming an important site for military aircraft test flying.[9]

Civil flights recommenced at the airport in 1947,[8] after Geoff Rennard fought for Leeds and Bradford to have an aerodrome, and eventually gained permission for an Aero Club. He was then appointed Airport Manager and stayed at the post for 5 years. Subsequently Yeadon Aviation Ltd was formed in 1953 to run the Airport and Aero Club. Two years later in 1955 flights to Belfast, Jersey, Ostend, Southend, the Isle of Wight and Düsseldorf were added to Yeadon's destination list.[5] Scheduled flights to London began in 1960, and Dublin was added shortly after. A new runway was opened in 1965, and in that year the terminal building was destroyed by a fire, with a replacement terminal opened by 1968.[4]

A British Airways Concorde taxis in 1987

By the mid 1970s the package holiday had become popular, and in 1976 the first holiday charter flight to the Iberian Peninsula departed Leeds Bradford.[10]

In 1978, it was decided that, with runway extensions, the airport could be upgraded to regional airport status. Work began in 1982, and was completed in November 1984. This included a significant extension to the main runway, including the construction of a tunnel to take the A658 Bradford to Harrogate road beneath the runway.[11] The airport also underwent significant extensions and redevelopments to the Terminal building, the first phase of which was opened on 18 July 1985.[12]

On 4 November 1984, the day the runway extension was officially opened, Wardair commenced transatlantic flights from Leeds Bradford to Toronto, using Boeing 747s, though these flights were later discontinued.[13]

Initially the airport had restricted operating hours, and this deterred many charter airlines, whose cheap fares depended on 'round-the-clock' use of their aircraft. In 1994, these restrictions were removed and flights could use the airport 24 hours a day,[15] so more airlines were attracted to Leeds Bradford.

Work on the airport terminal has been ongoing since 1996, and the result of this has been significant growth in terminal size and passenger facilities. In 2007 nearly 2.9 million passengers passed through the airport, an 88% increase in just seven years and more than twice as many compared with 1997 (1.2 million). Much of the growth in passenger numbers since 2003 has been due to the introduction of scheduled flights by the based low-cost airline Jet2.com.

The original runway (09/27) was closed on 6 October 2005, to be redeveloped as a taxiway and to provide additional apron space. In November 2008 the early stages of the airport masterplan were clarified, with in-depth detailed plans for the expansion of the airport terminal being published, at an estimated cost of £28 million.

from its formation on 10 February 1936, 609 (West Riding) Squadron was based at RAF Yeadon,[18] until 27 August 1939 when they moved to Catterick[19] (not returning again until 1947). 609 reformed in 1946 and returned to Yeadon in 1947[20] with their Mosquito MK.XXX aircraft, as the runways at Yeadon were too short for Mosquitos to be comfortably flown: safety speed (that which the aircraft needs to be flown and controlled on a single engine) was not reached until over flying central Leeds if taking off in that direction—with obviously drastic results should things go wrong on take-off. In addition, the airfield sloped downhill, meaning that it was necessary to land at RAF Linton-on-Ouse (20 miles away) if the wind were blowing from the wrong direction.[21] Eventually the Air Ministry re-equipped 609 with Spitfire LFXVIs.[21] This was sufficient as a short-term measure, but the grass airstrip was not ideally suited to Spitfire operations, and so it was decided that 609 Squadron should move to the hard runways of RAF Church Fenton in October 1950.[22]

Yeadon was requisitioned by the Royal Air Force and became part of firstly 13 Group, then 12 Group at a later date. Once 609 (West Riding) Squadron left for Catterick, Yeadon served as a Flying Training School, bomber maintenance unit, and a scatter airfield. In January 1942 it was transferred to the Ministry of Aircraft Production, whereupon Avro built a shadow factory for the production of Albermarles, Ansons, Lancasters, Yorks, and Lincolns. It was also used by Hawker Aircraft for development work on its Tornado design. The Royal Air Force remained a part of Yeadons life until 1957, operating Austers, Supermarine Spitfires, De Havilland Mosquitoes out of here. RAF Yeadon finally closed in 1959.[23]

Aircraft that would have been based at Yeadon included:

Leeds and Bradford councils jointly bought the airport site at Yeadon in 1930,[25] which opened as Yeadon Aerodrome in 1931. The airport became a limited company in 1987, and was shared between the five surrounding borough councils of Leeds (40%), Bradford (40%), with Wakefield, Calderdale and Kirklees together sharing the remaining 20%.

In October 2006 plans to privatise the airport were confirmed when Bradford Council became the last of the five controlling councils to agree to sell off the airport to the private sector. On 4 April 2007 the five controlling councils announced that Bridgepoint Capital had been selected as the preferred bidder.[26] On 3 May 2007 Bridgepoint was confirmed as the buyer.[27] On 4 May 2007 Bridgepoint Capital acquired the airport from Leeds, Bradford, Wakefield, Calderdale and Kirklees councils for £145.5 million. Although Bridgepoint Capital own the airport 100% financially, the councils hold a "special share" in the airport, to protect its name and continued operation as an air transport gateway for the Yorkshire region. The new owners said they were to implement a £70 million capital expenditure plan, to focus on improving passenger and retail infrastructure in order to increase passenger capacity to 7 million per annum by 2015.[2] 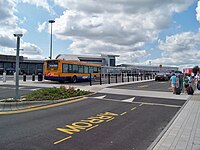 As part of both the airport and Metro's long-term strategies, there are proposals for the construction of a direct rail link to the airport on a branch from the Harrogate Line, however no firm commitments or timescales have been announced.

At present, the two nearest railway stations are Guiseley and Horsforth. There is a direct bus link to Guiseley, and there is a service from Leeds, whence further changes can be made to connect with Horsforth railway station most days.

The airport has connections to the local road network and is signposted on a large number of routes in the county. 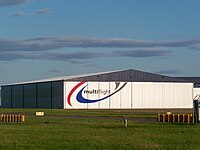 The airport is home to Multiflight, a flight training and aircraft engineering organisation. They are also the dedicated FBO at the airfield and provide helicopter and fixed wing charter flights as well as aircraft sales and management. General aviation operations are confined to the south-side of the airport, in order to maintain separation from commercial traffic utilising the main terminal.

In addition to numerous privately owned aircraft hangared on the south-side, a fleet of around 18 training aircraft are based at the airport. These include Cessna 152s, Piper PA28s and Beechcraft BE-76 Duchess twin engine trainers and Robinson R22 and R44 helicopters

During 2005 two new hangars capable of housing 4 × B737-800s were constructed, as well as a new apron and direct taxiway to the runway. A dedicated southside fuel farm was also installed.[28] In the past decade, over £10m has been invested into infrastructure on the south side by Multiflight.

The Aviation Academy is also located in a hangar at Leeds Bradford Airport, in conjunction with the University of Leeds and University of Bradford. Aviation professionals Derek Brickell and Peter Jackson, are based at the academy. The academy trains and prepares students to work in the aviation industry.