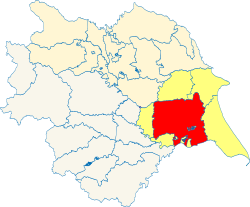 Harthill Wapentake shown within the East Riding and Yorkshire