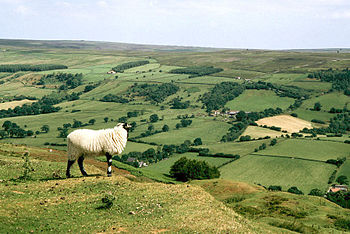 The North York Moors from space

The North York Moors are an area of hills upland moor in the North Riding of Yorkshire. This moorland is one of the largest expanses of heather moorland in the United Kingdom. The greater part of the moor has been declared a national park.

To the east the moors end at the impressive sea cliffs of the North Sea coast. The northern and western boundaries are defined by the steep escarpments of the Cleveland Hills which timble down to the lowlands beside the River Tees, and the Hambleton Hills above the Vale of Mowbray. To the south lies the broken line of the Tabular Hills and the Vale of Pickering.

Four roads cross the moors from north to south. In the east the A171 joins Whitby and Scarborough. Further inland, the A169 runs between Pickering and Whitby. More centrally, a minor road departs from the A170 at Keldholme and passes through Castleton before joining the A171 which connects Whitby and Guisborough. The most westerly route is the B1257 connecting Helmsley to Stokesley. The A170 from Thirsk to Scarborough marks the southern boundary of the moors area as defined for the purposes of the National Park if not by nature.

The North York Moors consist of a moorland plateau, intersected by a number of deep dales containing cultivated land.

The largest dale is Eskdale, the valley of the River Esk which flows from west to east and empties into the North Sea at Whitby. The Cleveland Hills rise north of Eskdale. At the western end of Eskdale the valley divides into three smaller dales, Westerdale (the upper valley of the River Esk), Baysdale and Commondale. A series of side dales drain into Eskdale from the moors on its southern side, from west to east Danby Dale, Little Fryup, Great Fryup, Glaisdale and the Goathland valley. Kildale, west of Commondale and separated only by a low watershed, is drained by the River Leven, which flows west to join the River Tees.

On their south side the moors are demarcated by a series of dales which drain into tributaries of the River Derwent. The westernmost dale is Ryedale, to the west of which rise the Hambleton Hills. Bilsdale is a side dale of Rye Dale. East of Bilsdale Bransdale, Farndale, Rosedale and Newton Dale cut into the moors. In the south east, the landscape is marked by the narrow valleys of the upper reaches of the Derwent and its upper tributaries.[1]

The Derwent crosses the Vale of Pickering flowing westwards, turns southwards at Malton and flows through the eastern part of the Vale of York before emptying into the River Ouse at Barmby on the Marsh.[2]

The geology of the North York Moors is dominated by rocks of the Jurassic period. They were mostly laid down in subtropical seas 205 to 142 million years ago. Fluctuations in sea level produced different rock types varying from shales to sandstones and limestones derived from coral. These marine and delta deposited rocks are superbly exposed on the Yorkshire coast from Staithes to [Filey]]. 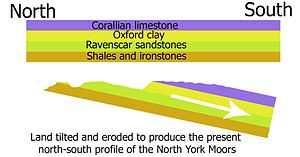 A cross section of the geology of the North York Moors

During the Quaternary period, the last 2 million years, the area has experienced a sequence of glaciations. The most recent glaciation, the Devensian, ended about 11,000 years ago. The higher parts of the North York Moors were not covered by the ice sheets but glaciers flowed southwards on either side of the higher land mass. The meltwater escaping at the end of the Ice Ages was unable to escape northwards, westwards or eastwards because it was blocked by ice, so huge torrents of water were forced southwards, gouging out the deep Newtondale valley as it went, and forming a vast lake in the area of the Vale of Pickering, which eventually burst out at Kirkham cutting the steep sided Kirkham Gorge. Boulder clay and alluvium from the meltwater cover many areas to the north of the moors and in the Esk valley.

A view of the North York Moors

The North York Moors National Park encompasses two main types of landscape, whose differences are clearly visible, and the coastal belt. There are predominantly green areas of pasture land and the purple and brown heather moorland. The two kinds of scenery are the result of differences in the underlying geology and each supports different wildlife communities.

Sphagnum moss bogs are common where there is abundant rain and poor drainage. Cotton grass is a distinctive plant which grows in the boggy areas. In the cold acid waters of peat bogs there is little decomposition of organic material with the result that the dead sphagnum moss gradually accumulates to form peat. This raises the levels of the bogs and they dry out. Heather then invades the area. Large areas of the moors are now covered in heather, bilberries and grasses growing on thick layers of peat.

The acid soils and peat bogs are unsuitable for earthworms or their predators but the pygmy shrew is found, living on the insects and spiders in the heather. Lapwing, curlew and redshank breed on the moors and there are sandpipers along the streams. Wheatear and golden plovers inhabit grassier patches on the moors and ring ouzels live in stony areas. Red grouse, which feed on young heather shoots, are abundant. The heather is burned in strips by gamekeepers and farmers to encourage new heather growth to feed the grouse. Grouse shooting is part of the moorland economy. About 20 per cent of the national park is covered in bracken. Few things can grow under its dense cover and it does not support many insects and is unpalatable to most animals. The bracken is extremely invasive.

Sheep are a ubiquitous part of the moorland landscape. Their grazing helps to maintain the open wild landscape that is needed for many other plants and animals to thrive.[3]

Limestone produces nutrient rich alkaline soils on well drained rocks. Gouging by glacial meltwaters has left spectacular valleys along whose floors run attractive streams. The limestone streams with their nutrient rich waters support an abundance of aquatic invertebrates such as insect larvae and crustaceans. These in turn support such fish as trout and grayling. Insects which emerge from the water in summer are also a rich source of food for birds. Grey wagtails, swallows and spotted flycatchers are commonly seen. Dippers and kingfishers are also typical. The otter, after a period of decline, is starting to recolonise the rivers and streams.

Farndale is famous for its wild daffodils in spring. Sheltered woodlands dominated by sessile oaks can be found to the south of the high ground. These woodland areas are the home of pied flycatchers, sparrowhawks and wood warblers. Roe and fallow deer can also be found here. The woodlands and south facing grasslands on the limestone belt provide a good habitat for many butterflies.

The fertile alkaline soils support an abundance of wild flowers. Bluebells and primroses grow in the hedgerows in spring and rarer plants such as the wood vetch and orchids are also to be found.

Adders are widespread throughout the national park. On the moors they eat common lizards and around the hedgerows and woodland edges they feed on mice and voles.[3]

The Limestone grasslands support a wide variety of wild flowers, and many rarer butterflies can be seen. Pearl-bordered fritillary, Duke of Burgundy fritillary, marbled white, dingy skipper and grayling are just some of species that inhabit the moors within the national park.

The cliffs and sandy bays of the coast offer an assortment of seashore habitats. The spectacular scenery where the Cleveland Hills meet the sea has been designated as a Heritage Coast. The cliff at Boulby, at 690 feet, is the highest point on the east coast of England. Here the Jurassic strata of shales, clays and ironstones are displayed with superb clarity. There are also fine exposures of Jurassic rocks with their characteristic fossils around Robin Hoods Bay and Ravenscar.

Rocky shores offer an abundance of seaweeds in zones of different types which are more and less tolerant of exposure to the air and salt or clear water. Rock pools contain sea anemones, blennies, crabs and molluscs.

Sandy shores harbour a variety of plants and animals which are buried in the sand. Birds such as curlews and oyster catchers are to be seen prodding the sand to find these creatures for food. A few cormorants and fulmars breed along the coast where stonechats and rock pipits can also be spotted. Herring gulls are the commonest breeding birds and are an interesting sight nesting in the chimneys of coastal towns.[3] 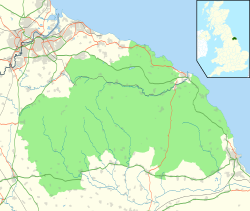 The National Park encompasses two main types of landscape, whose differences are clearly visible, and the coastal belt. There are predominantly green areas of pasture land and the purple and brown heather moorland. The two kinds of scenery are the result of differences in the underlying geology and each supports different wildlife communities.

The area's economy is mainly founded on tourism and agriculture.

For over a thousand years the basis of the economy in the North York Moors was agriculture. The rural scene, which attracts millions of visitors to the park each year, has been formed and maintained by generations of farmers. The 1996 Agricultural Census recorded a total workforce of 2,913 employed on 1,342 working farms. Sheep and cattle provide the prime source of farm income. The dale farms have rights to graze sheep on the open moor. The rights to moorland grazing are often essential to the economic viability of a farm. In recent years agriculture in Britain has suffered economic setbacks and the viability of hill farming has become questionable. A number of environmental schemes to improve farm incomes have been devised but the industry continues to decline.

Agricultural use of the moors is shared with grouse shooting as a means of gaining financial return from the vast expanse of heather. There is richer farmland across the southern limestone belt, where there are arable and mixed farms as well as the livestock farms. The main arable crops are barley, wheat, oilseed rape, potatoes, and sugar beets. There is also some intensive production of pigs and poultry. 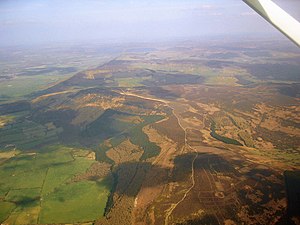 Many visitors to the moors are engaged in outdoor pursuits, particularly walking]]; the park has a network of rights of way almost 1,400 miles in length, and most of the areas of open moorland are open access under the Countryside and Rights of Way Act 2000.

Popular named walks include the Cleveland Way, which circles the moors, and has a section along the coast; and the Lyke Wake Walk, which leads directly across the heart of the moors. The route of The White Rose Way, a long distance walk from Leeds to Scarborough also passes through. The area also offers opportunities for cycling, mountain biking, and horse-riding, including a circular long distance bridle route created around the North York Moors which can be accessed at a number of locations.[5] The steep escarpments that define the edges of the park on three sides are used by several gliding clubs.

The National Park has two visitor centres which have tourist information, exhibitions and things to do for all the family, as well as a contemporary gallery.[6] These are at:

The moors have not changed much in the past 50 years, and are often used as a backdrop to British television programmes and films. The series Heartbeat and the scenes of The Hogsmeade Station in the Harry Potter films were filmed in Goathland. Dalby Forest is also host to many forms of entertainment throughout the year including outdoor concerts.