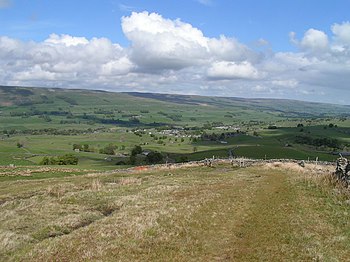 Wensleydale is beautiful dale in Yorkshire, formed as the valley of the River Ure, which runs from the high Pennines down to the heart of the county. Much of the dale is in the Yorkshire Dales National Park.

The river of Wensleydale is the Ure, and it is one of only a few valleys in the Dales not named after its principal river, but after a village in the middle of the dale; Wensley. Nevertheless, an older name, "Yoredale", can still be seen on some maps and as the Yoredale Series of geological strata, and in the name of the ruins of Jervaulx Abbey. The name of Wensley is the Old English ‘’Wodnes leag’’; ‘Woden’s meadow.’[1]

The dale is famous for Wensleydale cheese, the main commercial production of which takes place at Hawes at the top end of the dale.

Wensleydale was the home of one of Yorkshire's most famous clans, the Metcalfes, after they emigrated from Dentdale. The Metcalfe Society hold records dating back to Metcalfes living in the area during the 14th century. They were one of the most prominent families in Yorkshire for over five centuries. Sir James Metcalfe (1389–1472), who was born and lived in Wensleydale, was a captain in the army which fought with King Henry V in the Battle of Agincourt in 1415. Metcalfe is still one of the most common surnames in Yorkshire.

Bolton Castle in the village of Castle Bolton is a notable local historic site. Mary, Queen of Scots, was imprisoned here. The story goes that she escaped and made her way towards Leyburn only to lose her shawl on the way, hence the name ('The Shawl') of the cliff edge that runs westward out of Leyburn and is a well-known spot for easy walks with excellent views.

Wensleydale stretches some 25 mile from west to east. It lies between Wharfedale to the south, and the quieter Swaledale to the north, and to which it is linked over the Buttertubs Pass. Several lesser-known dales are branches of Wensleydale: on the north side Cotterdale, Fossdale and Apedale and on the south side, from west to east, Widdale, Sleddale, Raydale, Bishopdale, Waldendale and Coverdale.

Below Wensleydale, the River Ure flows east and south, becomes navigable, changes its name to the River Ouse, passes through York, to join the Humber estuary. On the way it collects the waters of the River Swale, River Nidd, River Wharfe, River Aire, River Derwent and River Trent.

Wensleydale's principal villages are Hawes and Leyburn. Aysgarth, Bainbridge, and Middleham are well-known villages. What is reckoned the shortest river in Britain, the River Bain, links Semerwater to the River Ure, at Bainbridge, where may be found the remains of an ancient Roman fort (part of the Roman road is walkable, up Wether Fell).

Hardraw Force, the highest unbroken waterfall in England, is located at Hardraw, near Hawes. Aysgarth Falls (High, Middle, Low) are famous for their beauty (rather than their height), attracting far-off visitors; they were also featured in the film Robin Hood: Prince of Thieves. Other notable waterfalls are at West Burton, and Whitfield Gill Force, near Askrigg.

Wensleydale is a very popular destination in its own right, enhanced by its central location between two other well-known tourist dales: Wharfedale and the quieter Swaledale.

Wensleydale is a common destination for visitors who like walking on mountains, moorland, dale-sides, and valley bottoms. Hawes and Leyburn are popular because of their age, location and facilities (pubs, shops, teashops, and hotels). Hawes is the home of a rope-maker’s (Outhwaites), where visitors can see the manufacturing process.

The Wensleydale Railway operates in Wensleydale. It currently runs between Leeming Bar, the A1 and Redmire, near Castle Bolton. The railway's long-term plan is eventually to run the whole length of the valley and connect again with the National Rail network at both ends: at Garsdale on the Settle-Carlisle Railway in the west and Northallerton on the East Coast Main Line in the east.

Some visitors come to Wensleydale due to its connection with Richard III, who was brought up in Middleham Castle, of which sufficient ruins remain to be well worth a visit. Middleham itself is a pleasant village with pubs and horse-racing connections (several stables). In the market place stands a stone carving, believed to be a boar's head, signifying where the animal market was during the 15th century as well as representing Richard's personal standard, the white boar.

Each August, visitors and local people gather at the edge of Leyburn for the Wensleydale Agricultural Show, which takes place in August - the 2013 event takes place on Saturday 24 August.[2]