Pontefract is a historic market town in the West Riding of Yorkshire, standing close to the A1 (the old Great North Road) and the M62 motorway. Pontefract's motto is Post mortem patris pro filio, Latin for "After the death of the father, support the son", a reference to the town's adherence to the Royalist cause in the Civil War.

The name "Pontefract" is from the Latin for "broken bridge" ponte fractus. Pontefract was not recorded in the 1086 Domesday Book, but was noted as Pontefracto in 1090, four years after the Domesday survey.[1]

There is a theory that the bridge alluded to was one which crossed Wash Dike, a small stream on the north-eastern edge of Pontefract, running alongside what is now Bondgate (the modern-day A645). It would have been important in the town's early days, providing access between Pontefract and other settlements to the north and east, such as York.[2] 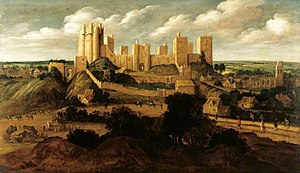 Pontefract is on an old Roman road (now the A639), described as the "Roman Ridge", which passes south towards Doncaster. The Roman Ridge is believed to form part of an alternative route from Doncaster to York by way of Castleford and Tadcaster, as a diversion of the major Roman road Ermine Street, which may have been used to avoid having to cross the river Humber near North Ferriby during rough weather conditions over the Humber. The area which is now the town market place was the original meeting place of the Osgoldcross wapentake.[3] There are the remains of an Anglo-Saxon church and cemetery at The Booths, off North Baileygate, below the castle. The oldest grave dates from around 690. The church is likely to be at Tanshelf, recorded as Tateshale/Tateshalla/Tateshalle/Tatessella in the 1086 Domesday Book, but Pontefract is not mentioned.

Pontefract Castle began as a wooden motte and bailey castle, built before 1086 by Ilbert de Lacy, later rebuilt in stone. In Elizabethan times the castle, and Pontefract itself, was referred to as "Pomfret".[4] King Richard II was murdered at the castle in 1400.[4] William Shakespeare mentions "Pomfret" in Richard II and in Richard III, in the latter of which Lord Rivers laments:

Pomfret, Pomfret! O thou bloody prison,
Fatal and ominous to noble peers!
Within the guilty closure of thy walls
Richard the second here was hack'd to death;
And, for more slander to thy dismal seat,
We give thee up our guiltless blood to drink.[4]

The new church within the old

Pontefract suffered throughout the Civil War. In 1648-49 the castle was laid under siege by Oliver Cromwell, who said it was "[...] one of the strongest inland garrisons in the kingdom."[4] Three sieges by the Parliamentarians left the town impoverished and depopulated. In March 1649, after the third siege, Pontefract inhabitants, fearing a fourth, petitioned Parliament that the castle be demolished. In April 1649 demolition began. The ruins of the castle remain today and are publicly accessible. 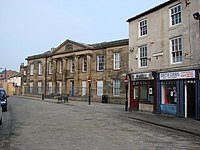 Pontefract was the site of Pontefract Priory, a Cluniac priory founded in 1090 by Robert de Lacy dedicated to St John the Evangelist. The priory was dissolved by royal authority in 1539. The abbey maintained the Chartularies of St John, a collection of historic documents later discovered by Thomas Levett, High Sheriff of Rutland and a native of Yorkshire, among family papers. Levett gave the chartulary to Roger Dodsworth[5] and it was later published by the Yorkshire Archaeological Society.

In 2007 a suspected extension of Ferrybridge Henge, a Neolithic henge, was discovered near Pontefract during a survey in preparation for the construction of a row of houses. Once the survey was complete, the construction continued.[6]

Pontefract's deep, sandy soil makes it one of the few British places in which liquorice can be successfully grown. The town has a liquorice-sweet industry; and the famous Pontefract Cakes are produced, though the liquorice plant itself is no longer grown there. The town's two liquorice factories are owned by Haribo (formerly known as Dunhills) and Monkhill Confectionery (part of the Cadbury's Group - formerly known as Wilkinson's), respectively. 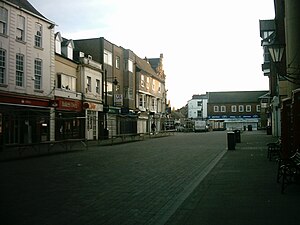 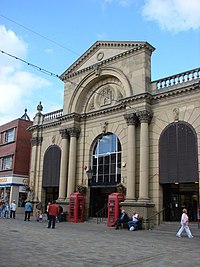 Pontefract has been a market town since the Middle Ages; the market days are Wednesday and Saturday, with a smaller market on Fridays. The covered market is open all week, except Thursday afternoons and Sundays. Thursday afternoon is half-day closing in the town. The town is called Ponte/Ponty by its citizens and sometimes jokingly referred to as Ponte Carlo, in reference to Monte Carlo. This theme is continued in the name of bars in the Xscape complex, Glasshoughton between Pontefract and Castleford, referred to locally as 'Cas Vegas'.

Pontefract General Infirmary is a large general hospital, beneath which is an old hermitage]], open to the public on certain days.

Valley Gardens have a love garden, an aviary, and an avenue of cherry trees, which bloom in the spring. Although the trees continue to attract admiration, the gardens have become quite depleted.

Novelist Jack Vance, in the "Demon Princes" cycle has named the capital of Aloysius, the main planet in the Vega system after Pontefract. The hero of the series, Kirth Gersen, has his residence there.

Pontefract Racecourse is the longest continuous circuit in Europe at two miles and 125 yards.[7] It stages flat racing between the end of March and the end of October.