Keighley is a town in the West Riding of Yorkshire, standing 11 miles north-west of Bradford at the meeting of the rivers Aire and the Worth.

If the town is within the "Brontë Country" as tourist maps show it, it could hardly be further from the rural setting of those sisters' novels, for it is an industrialised, heavily urban centre, sunk into poverty by the decline of its industry. It is a racially mixed town with a large Indian population.

Keighley lies in a fold between the countryside of Airedale and Keighley Moors. The town is the terminus of the Keighley and Worth Valley Railway, a heritage steam branch line which has been restored and runs through the Worth Valley to Oxenhope by way of Oakworth and Haworth.

Geography and the town 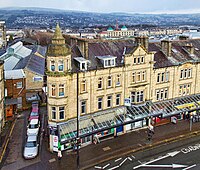 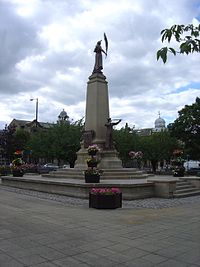 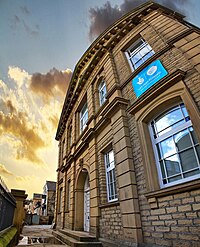 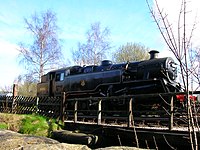 Keighley lies at the meeting of the rivers Worth and Aire in Airedale, in the south Pennines. Its northern boundary is with Bradley and its southern limit is the edge of Oxenhope. To the west, the town advances up the hill to the suburb of Black Hill and in the east it terminates at the residential neighbourhoods of Long Lee and Thwaites Brow. The outlying northeastern suburb of Riddlesden is sometimes referred to as a separate village, but is effectively part of the town.

Past Black Hill on Braithwaite Edge Road lies Braithwaite Village which leads to Laycock, which was mentioned in the Domesday Book. Laycock is a conservation area which overlooks the hamlet of Goose Eye.

The River Aire passes through north eastern Keighley, dividing the neighbourhood of Stockbridge and running roughly parallel to the Leeds and Liverpool Canal. The Worth links up with the Aire in Stockbridge and runs south-westerly, dividing eastern Keighley from central and western districts of the town. The Worth is lined with abandoned, semi-derelict industrial sites and tracts of waste ground dating from the period when Keighley thrived as a major textile centre.

Parts of Keighley are prone to flooding and the town was particularly badly hit in by floods 2000.[1][2] Since then, millions have been spent on strengthening flood defences.

Other outlying villages around the town are Oakworth, Cross Roads, Haworth, Stanbury and Oxenhope. The two main villages to the north are Silsden and Steeton, both villages part of the wider Keighley area.

To the north east is Rombald's Moor which contains many signs of stone age and Bronze Age occupation including cup and ring marks,[3] and as it drops back down into Wharfedale and the town of Ilkley, approximately five miles away, becomes the more famous Ilkley Moor.

Much of the town centre has been pedestrianised. Keighley has three large supermarkets and the Airedale shopping centre, a large indoor shopping precinct which houses most of the town's high street retail chains. There are several budget supermarkets in small retail parks around the town.

Keighley is on the railway with connections to Leeds, Bradford, Shipley, Bingley, Skipton, Carlisle and Morecambe. The Keighley and Worth Valley railway is a heritage steam railway, which links the town with Haworth, Oakworth, Oxenhope and the Brontë Country.

Muslims make up the second largest religious group in the town; according to the 2011 census there were more than 12,400 Muslims in Keighley, of a community which mostly came from the Mirpur region of Kashmir and Sylhet in Bangladesh. As of 2013 there were eight mosques in Keighley.

There is a Buddhist centre on Lawkholme Crescent.

The name Keighley, which has gone through many changes of spelling throughout its history, is accepted to mean "Cyhha's meadow"[4] and was mentioned in the Domesday Book:

"In Cichhelai, Ulchel, and Thole, and Ravensuar, and William had six carucates to be taxed."

Henry de Keighley, a Lancashire knight, was granted a charter to hold a market in Keighley on 17 October 1305 by King Edward I.[5] The poll tax records of 1379 show that the population of Keighley, in the Staincliffe Wapentake was 109 people (47 couples and 15 single people).[6]

From 1753 the Union stage coach departed on the Keighley and Kendal Turnpike from what was the Devonshire Arms coaching inn on the corner of Church Street and High Street. Rebuilt about 1788 this public house sports a classical style pedimented doorcase with engaged Tuscan columns in the high fashion of that age. The original route towards Skipton was Spring Gardens Lane – Hollins Lane – Hollins Bank Lane.[7] Keighley was to become an intersection with other turnpikes including the Two-Laws to Keighley branch of the Toller Lane - Blue Bell turnpike (1755) from Bradford to Colne; the Bradford to Keighley turnpike (1814); and the Keighley to Halifax turnpike.

The town's industries have typically been in textiles, particularly wool and cotton processing. In addition to the manufacture of textiles there were several large factories making textile machinery. Two of these were Dean, Smith & Grace and Prince, Smith & Stell. The former operated as a manufacturer of CNC machine tools, particularly precision lathes, until 2008.

Like many other British towns and cities, Keighley was extensively remodelled in the 1960s and lost many historic buildings. However, the town managed to retain some of its heritage and has many Victorian buildings. The local millstone grit gives many of the buildings a distinctive look.

East Riddlesden Hall, Cliffe Castle Museum and Whinburn Mansion are fine, country houses. There are large town houses along Skipton Road which contrast with the cramped rows of terraces in the streets behind them.

The town's central library was the first Carnegie library in Yorkshire, opened in 1904 with a grant of £10,000 from Andrew Carnegie.[8] The library has undergone refurbishment which was completed in 2007. Many of the town's former mill buildings are still intact.

The town centre contains modern buildings such as Leeds City College and examples of Victorian commercial architecture, including the long terrace of Cavendish Street with its 220-yard (⅛ mile/a furlong) ornamental canopy. There is an award winning bus station which opened in 2002 near the Airedale Shopping Centre.[9][10] There are several tower blocks in Parkwood Rise, Holycroft and Ingrow and a central multi-storey car park.

Amongst the modern houses in Laycock, 2 miles outside Keighley town centre is a 17th-century three-storey manor house (which is said to be the former wing of a much bigger property), converted barns and 18th century cottages.

On the outskirts of town is Cliffe Hall, also known as Cliffe Castle, now Keighley Museum.[11] Keighley is the location of the Keighley and Worth Valley Railway, a heritage railway that passes through Haworth (part of the Brontë Country, home of the Brontë Sisters) and terminates at Oxenhope. At Ingrow is the Museum of Rail Travel.

Top Withens and the Brontë Waterfall are within walking distance of Stanbury, a mile and a half from Haworth. East Riddlesden Hall is in Riddlesden.

The Keighley and Worth Valley Railway, running steam trains from Keighley to Haworth and Oxenhope, has been used in several films, including The Railway Children, Yanks, the film of the Pink Floyd musical The Wall and an episode of the long-running situation comedy, The Last of the Summer Wine.

A Touch of Frost]] was filmed at the railway line close to Ingrow West.

Utley Cemetery contains the grave of Christopher Ingham, a veteran of the conflict against Napoleon. He was a member of the Duke of Wellington's elite 95th Rifle Regiment and fought in ten battles against the French in Spain, France and Belgium including the Peninsula War and the Battle of Waterloo, for which he was awarded several medals. He died in 1866. Some local historians believe Mr Ingham's heroism may have inspired the author Bernard Cornwell's saga about Major Richard Sharpe.[14] The TV series episode Sharpe's Justice, which focuses on the roots of the title character, is set in and around Keighley. 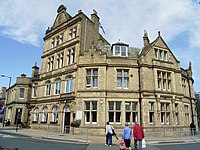 John Cooper Clarke poem, Burnley includes the lines: "I'll tell you now and I'll tell you briefly, I don't ever want to go to Keighley."

In 2003, The Idler magazine set up an online poll to decide which were the 50 worst places to live in Britain; Keighley came in at number 40. Keighley's local newspaper, the Keighley News, reported the reaction of Councillor Andrew Mallinson, chairman of Keighley Town Centre Management Group: "On the positive side, it's nice to know that out of all the towns in the country, Keighley has got a mention!"