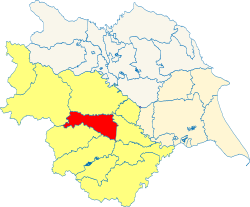 Skyrack Wapentake shown within the West Riding and Yorkshire

Skyrack is a wapentake in the West Riding of Yorkshire. It is bounded by Claro to the north; by Barkston Ash to the east; by Agbrigg and Morley to the south; and by Staincliffe to the west. Including that part of the city of Leeds north of the River Aire, it had a population of 528,144 in 2011.

The name "Skyrack" is apparently derived from scir ac or "shire oak", which may suggest an oak tree used as a meeting place. An ancient oak, said to be the Shire Oak, stood to the north of St Michael's Church in Headingley until 1941.

The wapentake comprises the ancient parishes of: