Mickle Fell is the highest point of Yorkshire. It stands up in the North Riding of Yorkshire, in the Pennines, the range of hills and moors running down the middle of Northern England. It is 2,585 feet high and lies slightly off the main east-west watershed of the Pennines, about ten miles south of Cross Fell.

Its name is appropriate to it, meaning in the local dialect simply “Big Fell”. Both of the dialect words are from the Old Norse language; Mikill meaning “big” and Fjäll meaning mountain or hill.

The fell lies in the middle of a large area of boggy moor and requires a long hike to get to it from any direction. Mickle Fell's distinctive outline makes it a recognisable object in views from the Lake District hills, particularly Blencathra, the Helvellyn range and High Street. South of Mickle Fell the ridge descends to the Stainmore Gap before rising again into the Yorkshire Dales.

Mickle Fell and surrounding moorland forms part of the Warcop Training Area, a Ministry of Defence firing range. As a result, access to the fell is limited.[1] It can be ascended from the Eden Valley to the west, or from Teesdale to the east. 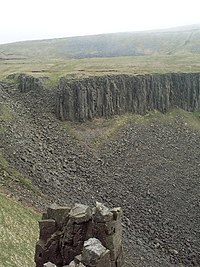 On the moor to the west of Mickle Fell between Murton Fell and Dufton Fell is a remarkable natural formation known as High Cup, a vast 'hole' in the moorside, similar in form to an elongated crater. A waterfall at the head of the Cup is called High Cup Nick. The feature is well seen from the A66 road. The Pennine Way goes past High Cup on its cross-watershed trek from Middleton-in-Teesdale to Dufton.