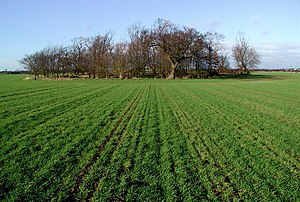 The East Riding of the county of York is the smallest and least populous of Yorkshire's three ridings and the lowest-lying.

The East Riding has a lengthy seacoast along the North Sea and up the broad, tidal Humber. Inland it remains low-lying country, in contrast to the other two ridings, providing rich agricultural land.

In the centre the Yorkshire Wolds rise, the highest land in the Riding; an undulating chalk plateau which never rises above 900 feet.

Holderness is the flat, broad triangular land caught between the sea and the Humber. It comes towards a point and a narrow whip of land ending at Spurn Head.

The coast of the Humber estuary is flat, windy ground, and the commercial heart of the East Riding. The Humber is a great commercial gateway, and at its heart the City of Kingston upon Hull, usually known just as Hull. Hull is the largest port in Yorkshire, and one of the largest in Britain a large port, and the city itself is an industrial city.

North of Hull, Beverley is a quieter town with the famous Beverley Minster.

The coast describes a smooth line along Holderness and a smooth sandy curve up to Flamborough Head and beyond the lofty chalk cliffs up to Filey Bay. Here are a number of holiday resorts, most notably Bridlington and Filey.

The gentle Derwent valley forms the boundary with the North Riding, down to the walls of the City of York, where the three Ridings meet.

The wapentakes of the East Riding are: