Leeds Town Hall is a Grade-I listed concert hall and venue for formal civic functions sitauted at The Headrow, Leeds 1, Yorkshire. It was built between 1853 and 1858 to a design by architect Cuthbert Brodrick.[1]

Until early 1813, the Moot Hall at the top of Briggate was the seat of Leeds Corporation and was used for judicial purposes. It was replaced by a new court house on Park Row.

Leeds went through a period of rapid growth in the first half of the 19th century and by the mid-19th century it became apparent that the court house was no longer large enough for the functions it performed. In July 1850, Leeds Borough Council decided to build a new town hall and established a committee to assess the opinions of Leeds' inhabitants as to the building of a new municipal hall. 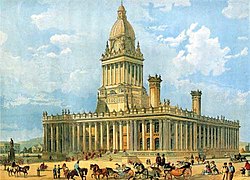 An artist's rendition of the new Town Hall. Note that the clock tower is out of proportion 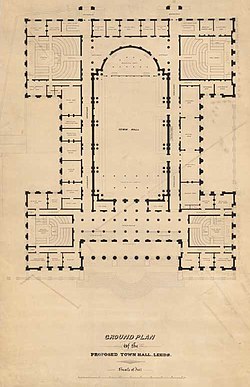 Plan of the Town Hall

In order to finance the Town Hall, the council proposed to sell shares in the building to the value of £10 but the proposal failed. The council then proposed introducing a specific rate levied to fund its construction although it was not introduced until after the November 1850 local election, and most residents who would have paid the tax at the time lacked voting rights. The Town Hall was approved in January 1851 when Alderman Hepper put the motion to the council and it was carried by 24 votes to 12.[2] It was intended to represent Leeds' emergence as an important industrial centre during the Industrial Revolution and symbolize civic pride and confidence. 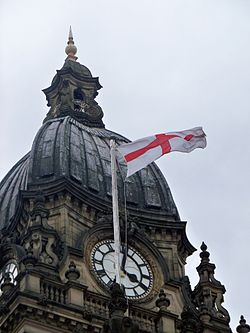 Leeds Corporation tendered for designs from architects and the contract was won by Cuthbert Brodrick, an unknown architect from Kingston upon Hull who had trained in Paris. The building contract went to Samuel Atack, who completed most of its construction before the hazards of a large building project ultimately led to his bankruptcy.

Leeds Town Hall was subject to much criticism during its construction. The original estimated costs were vastly exceeded and the corporation had to find extra funding at a time when there was great poverty among the Leeds' working classes. Samuel Atack's main problems as the builder were: changes in design and difficulties with the architect; the Crimean War, because army recruitment caused a shortage of workmen and a rise in wages; and deadline pressures arising from Queen Victoria's agreement to open the building.

The Town Hall provided accommodation for municipal departments, a courtroom, police station or 'central charge office', and a venue for concerts and civic events. It still has a role as a council office, although many departments have been relocated.[3] The principal performance space, the richly decorated Victoria Hall, is a venue for orchestral concerts. Its concert organ, the largest three manual example in Europe, is used for lunchtime organ recitals, many given by Dr Simon Lindley, collated as fourth City Organist in January 1976. Dr Lindley is also Organist and Master of the Music at Leeds Minster, a post he has held since 1975.

During the war the town hall housed an ARP post in the basement and from 1942 a British Restaurant, which proved popular after the war, being refurbished in 1960 before closing in 1966.[4]

On 14 and 15 March 1941, Leeds was bombed by the Luftwaffe. Houses were destroyed in Bramley, Burley, Armley and Beeston and bombs dropped on the city centre, hitting the east side of the town hall causing significant damage to its roof and walls on Calverley Street.[5] The damage was repaired shortly after.[6]

In May 1942, 25,000 people turned out to hear a speech given by Winston Churchill on the steps of the town hall. The then Prime Minister praised the efforts of the civilian workforce.

In 1993 Leeds Crown Court opened on Westgate ending the Town Hall's role as a courthouse. The Town Hall's cells also closed ending an arrangement where a public concert could happen simultaneously in a building while prisoners are being held. During its time as Leeds Assizes and later Leeds Crown Court it held various notable cases including the conviction and life-sentencing of Stefan Kiszko for the murder of Leslie Molson in 1976 (later quashed) and the conviction of Zsiga Pankotia for the murder of Jack Eli Myers in 1961 who became the last man to be hanged at Armley Gaol.

In 1999 and 2000, when the adjacent library was being refurbished, it provided storage and a small lending library operated from the crypt.

The Town Hall is used by the city council as a register office. Weddings and civil partnerships take place in the Albert or Brodrick Suites. The former courtrooms are now the Albert Room, a conference suite with adjacent bar and canteen.[7]

Today the Town Hall is mainly used for concerts and formal civic functions. It is the setting for the Leeds International Pianoforte Competition.[8] The Leeds International Film Festival screens many of its films in the Town Hall each year.[9] Leeds Town Hall was used for filming The New Statesman, often standing-in for Parliament and other London-based government offices. The Town Hall hosts events of local interest such as the Leeds International Beer Festival. In 2003 a concert by American band Black Rebel Motorcycle Club was abandoned half way through as the floor started to move and officials feared collapse.[1][10][11] The town hall provided the location for the Grand Départ for the 2014 Tour de France.

Leeds Town Hall is one of the largest town halls in the United Kingdom and as of 2008 it is the eighth tallest building in Leeds. It was opened by Queen Victoria, highlighting its status as an important civic structure. It is a Grade I listed building.

With a height of 225 ft, it was the tallest building in Leeds from its construction in 1858 until 1966, when it lost the title to the Park Plaza Hotel, which stands 28 ft taller at 253 feet. It has held the title longer than any other building, a record 108 years. The distinctive clock tower, which serves as a symbol of Leeds was not part of the initial design but was added by Brodrick in 1856 as the civic leaders sought to make an even grander statement.

Leeds Civic Hall was commissioned by Leeds Corporation in a Keynesian project intended to provide work for the local unemployed. The Civic Hall opened in 1933 as the seat of Leeds City Council. Since then the Town Hall has been used for civic events such as concerts rather than council meetings. 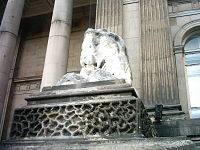 Lion sculpture outside the Town Hall

Leeds Town Hall was used as a model for buildings across Britain and the British Empire.[12]

In a 1960s BBC film about the changing architecture of Leeds, poet John Betjeman, known for his love of Victorian architecture, praised the Town Hall.[13] On 29 November 2008, Leeds Town Hall and the town halls of Halifax, Paisley, Burslem, Hornsey, Manchester, Lynton, Dunfermline, Fordwich and Much Wenlock were selected as the "ten town halls to visit" by Architecture Today. It commented: The epitome of northern civic bombast, Leeds' municipal palace has a grandeur that helps sustain the city's sense of its own importance. Its architect, Cuthbert Broderick, also contributed the Corn Exchange and City Museum before disappearing into obscurity.[14]