Thirsk is a small and rather pretty market town in the North Riding of Yorkshire, all amidst the countryside it serves. It is eight miles south of Northallerton.

Thirsk is a popular tourist destination close to the North York Moors. It has some small and medium-sized businesses, and is known as the home of author James Herriot and birthplace of Thomas Lord, after whom Lord's Cricket Ground is named. It is also well known for its racecourse. 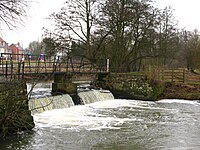 The town lies in the Vale of Mowbray, 23 miles north of York. Cod Beck runs through the centre of Thirsk – the area to the east of the river is called Old Thirsk.

Thirsk bears a Norse or Danish name, and it is surrounded by a number of villages also having names of the same origin, such as Thirlby, Boltby, Borrowby and Sowerby (the -by suffix in Norse and Danish means village or farmstead). The village of Sowerby adjoins the town so that they merge into each other.

The name "Thirsk" is derived from the Old Norse) þresk meaning fen or lake.[1][2] 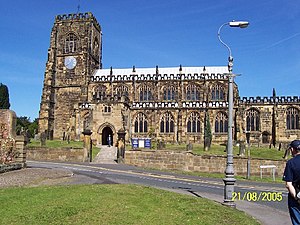 The parish church is dedicated to St Mary. It is a 15th-century church, (and now Grade I Listed).[3] Before this church there had been smaller chapels erected in the town dedicated to St James, St Giles and St Nicholas.

A Friends Meeting House in Kirkgate has stood since at least 1799. There is a Wesleyan Chapel in St James' Green that was built in 1861. The Catholic Church dedicated to All Saints was built in 1867 in Castlegate. The Primitive Methodists and the Congregationalists also used to have places of worship in the town.

Local archeological finds indicate there was a settlement here around 500–600 BC.[4]

The town is mentioned twice in the Domesday Book as Tresche, in the Yarlestre hundred. At the time of the Norman invasion the manor was split between Orm and Thor, local English landowners, each bearing a Norse name. Afterwards the manor was split between Hugh, son of Baldric and the Crown.[5] Most of the land was granted thereafter to Robert de Mowbray, after whom the surrounding vale is named.[6]

By 1145, what is now Old Thirsk was known as a borough, whilst the remaining land in the Parish was subject to Manorial rights. The manor continued to be the possession of the Mowbrays, despite several claims, until the death of the 16th Lord Mowbray in 1476. With no direct succession, it passed to the daughter of Thomas de Mowbray, 1st Duke of Norfolk who had married into the Berkeley family. Her son, William de Berkeley, 1st Marquess of Berkeley then inherited the manor on her death. It remained with this family until 1723 when it was sold to Ralph Bell. It remained in the Bell family into the 20th century.[6]

After ending the War of the Roses, Henry VII raised taxes that caused uprisings in the north. This led to the murder of the Henry Percy, 4th Earl of Northumberland, allegedly on The Little Green, when he was sent to collect. However, other evidence points to the murder occurring in nearby South Kilvington[7]

An 1763 Act of Parliament provisioned the building of a navigable waterway from the River Swale to the town along the Cod Beck. This was started, but never completed, in 1784 and would include deepening the channel, straightening part of its course and building five locks and a wharf. Remains of the wharf and lock can still be seen near Lock Bridge.[6][8]

The Thirsk Poor Law Union was formed in 1837 and covered a large part of the North Riding of Yorkshire. A workhouse was erected in Sutton Road in 1838. 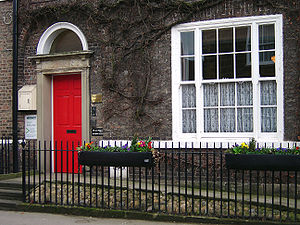 At Manor House signal box on 2 November 1892, a major rail crash took place on the North Eastern Railway about three miles north of Thirsk railway station. It involved an express train colliding with the back of a goods train, both heading south in fog. There were ten deaths and forty-three injured.[9]

Another rail crash occurred on 31 July 1967 at Thirsk, on the British Rail East Coast Main Line. An express train travelling north collided with a derailed freight train on the same line. There were seven deaths and forty-five injured.[10]

Thirsk's chief modern claim to fame is as the home of the veterinary surgeon and author James Herriot,[11] although it was renamed "Darrowby" in the books. The veterinary practice at 23 Kirkgate, in which he was a partner along with Donald Sinclair (Siegfried Farnon in the books), now houses a museum dedicated to his life and works, The World of James Herriot.[12]

Thirsk is built around a large mediæval market square, which still hosts an open-air market each Monday and Saturday. The market was established in 1145. For most of its history it has been the focal point for local farmers to bring their produce to market and buy their needs from small independent tradesmen. The town was once known for its leather tanning and saddlery, but this was replaced in the 19th century by the production of farming implements. This was aided by the establishment of the Mechanics Institute in 1848.

The modern economy has not changed much, with a mix of small industrial and retail businesses together with other service companies available.[13]

Thirsk Racecourse is a thoroughbred horse racing venue consisting of a left-handed oval of about one mile and two furlongs. The present course opened in 1923, but racing had taken place on the old course over 200 years earlier. The racecourse serves flat racing in the spring and summer months.[14]

Thirsk Cricket Club was founded in 1851 and play in the middle of the local racecourse. The club was a founder member of the York & District League in which they still compete.[15] Also located at the facilities on the racecourse are Thirsk Hockey Club, who have been affiliated to the Yorkshire Hockey Association since 1923. Until the local Secondary School laid a floodlit artificial sports pitch, the club played on grass pitches that formed the out field of the Cricket Club. They still share the Cricket Clubhouse for social facilities.[16]

Thirsk Falcons FC are a football club that compete in the Teesside Football League, which is at the 13th level of the English football league system.[17] Thirsk RUFC are a Rugby Union Club that compete in the Yorkshire RFU Central/North District Merit League, which is the fourth tier of this competition.[18] Other sports played in the town are Tennis, Bowls, Athletics and Archery.[19]