The bridge is of an unusual form: a 'transporter bridge' more in the nature of an airborne ferry, carrying a travelling 'car', or 'gondola', suspended from the bridge, across the river in 90 seconds. The gondola can carry 200 people, 9 cars, or 6 cars and one minibus. It is the longest remaining transporter bridge in the world and one of only two transporter bridges operating in the United Kingdom; the other being the Newport Transporter Bridge over the River Usk in Monmouthshire.

Locally the bridge is often referred to simply as 'the Transporter'. It carries the traffic of the A178 Middlesbrough to Hartlepool road under its belly. 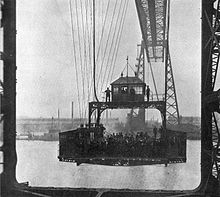 The idea of a transporter bridge across the River Tees was first mooted in 1872 when Charles Smith, Manager of the Hartlepool Iron Works, submitted a scheme to Middlesbrough Corporation. However the scheme was not pursued and it would not be until the new century that the idea of a transporter bridge across the river would again be revisited. Following a 1907 Act of Parliament the Bridge was built at a cost of £68,026 6s 8d by Sir William Arrol & Co. of Glasgow between 1910 and 1911 and replaced the ferry service here, which had been carried on by the steam boats 'Hugh Bell' and 'Erimus'.[1] A transporter bridge was chosen rather than a fixed bridge because Parliament ruled that the new scheme of crossing the river had to avoid affecting the river navigation. The foundation stones, made of Aberdeen granite, were laid by Mayor of Middlesbrough Thomas Gibson-Poole and Alderman Joseph McLauchlan, the initiator of the transporter bridge scheme.

The opening ceremony on 17 October 1911 was performed by the Governor-General of Canada, Prince Arthur of Connaught (who was in Britain for his son's wedding and thrust into Royal duties: a few weeks later he opened the Middlesex Guildhall).

During the Second World War, the superstructure of the bridge was hit by a bomb. In 1953, the gondola got stuck half-way. While it was stuck, gale force winds lashed water to within inches of it. Notwithstanding these incidents, the gondola and the Transporter Bridge are still running in perfect order.

In 1974, the comedy actor Terry Scott, travelling between his hotel in Middlesbrough and a performance at the Billingham Forum, mistook the bridge for a regular toll crossing and drove his car off the end of the roadway, landing in the safety netting beneath.[2]

In December 1993, the bridge was awarded the Institution of Mechanical Engineers' highest honour, The Heritage Plaque, for engineering excellence, in recognition of the Council's efforts in keeping the bridge in good working order. Its historical importance was also recognised in 1985 by its listing as a Grade II* Listed Building and its prominence as a local landmark was further enhanced in 1993 by the installation of flood lights that operate during the winter months.

The Middlesbrough Transporter Bridge has an overall length (including cantilevers) of 851 feet, leaving a span between the centres of the towers of 590 feet, the beam of the bridge being carried at a height of 160 feet above the road. The bridge is the longest remaining transporter bridge in the world.

The bridge is currently owned by Middlesbrough Council and Stockton-on-Tees Borough Council. Middlesbrough Council has control of the day-to-day operations and maintenance. In 2011 the Middlesbrough Transporter Bridge received a £2.6m Heritage Lottery Fund award for improvement and renovation work to mark the Bridge's centenary. The improvement works include the installation of a glass viewing lift to the landmark's upper walkway and renovation of the gondola. The bridge was closed on 27 August 2013 for 40 days repainting. It was then discovered that repairs were needed. The bridge was re-opened for traffic on 6 April 2015. The "improvement works" are "still in hand".

The bridge is a Grade II* Listed Building, and other elements, such as its Winch House, piers, railings and gates are Grade II listed.[3][4][5] 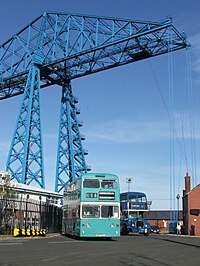 The bridge hosts an annual vintage bus running day, organised by The 500 Group.[6] On this one day a year, usually a Sunday in April, vintage buses take people on free rides around Teesside. As part of the 2006 and 2007 events the bridge made a special trip carrying a former Teesside Municipal Transport Daimler Fleetline. Before this run began, no double deck bus had used the bridge in 30 years.[7]

In 2013, the Tees Transporter Bridge Anniversary Award was inaugurated as part of the Transporter Bridge's Heritage Lottery Fund-supported Visitor Experience Project in partnership with the Chartered Institution of Highways & Transportation (CIHT) and Teesside University. The inaugural award winner was Stephen Brown in Autumn 2013, with Jason Dunnett receiving the accolade in Autumn 2014.[8]

The Middlesbrough Transporter Bridge has featured in films and TV programmes including:

The storyline of the third series of Auf Wiedersehen, Pet saw the bridge dismantled to be sold to and re-erected in the United States. The local council received calls from people worried that the bridge was really being pulled down,[9] with the BBC adding a disclaimer on the end of the final episode of the series stating that 'The Transporter Bridge remains in Middlesbrough'.

In the millennium celebrations of 2000, fireworks were fired from the length of the bridge.