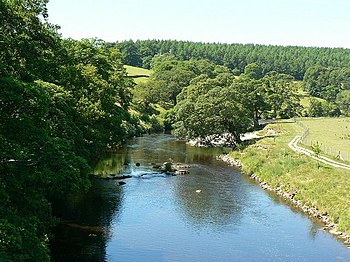 The Wharfe by Bardon Scale

The River Wharfe is a river in Yorkshire, which carves one of the finest of the Yorkshire Dales; Wharfedale. The river rises amongst the Pennines in the Craven district of the West Riding and after flowing down through Wharfedale it ultimately becomes a tributary of the River Ouse.

The name "Wharfe" is from the old British language and means "twisting" or "winding".

The river's source is at Beckermonds at Langstrothdale in the Yorkshire Dales National Park. Thence it flows through Kettlewell, Grassington, Bolton Abbey, Addingham, Ilkley, Burley-in-Wharfedale, Otley, Wetherby and Tadcaster. It enters the River Ouse near Cawood. The section of the river from its source to around Addingham is known as Upper Wharfedale and has a very different character to the river downstream.

The river is approximately 60 miles long before it joins the River Ouse. It is a public navigation from the weir at Tadcaster to its junction with the River Ouse near Cawood and tidal from Ulleskelf.

The River Wharfe meandering between Starbotton and Kettlewell

The river source is the confluence of Oughtershaw Beck and Green Field Beck in Langstrothdale near Beckermonds. It flows east and south east taking the flows from many small streams, whose sources are the shake holes from Yockenthwaite Moor on the north bank and Horse Head Moor on the south bank. After Hubberholme, the river flows south past Buckden and Starbotton and then south east past Kettlewell before flowing south again. Near Conistone are the gentle waterfalls of Scar Lash. Shortly before reaching Grassington, the river turns south east over Linton Falls. South of Appletreewick, the river flows south west for a short distance until it reaches Gill Beck and returns southward. To the north of Bolton Bridge, the river narrows and goes over waterfalls in an area known as The Strid. The river winds south and south east towards Ilkley where it heads east through Otley and Collingham. It briefly flows north to Wetherby before turning south and then south east past Ulleskelf to the confluence with the River Ouse. 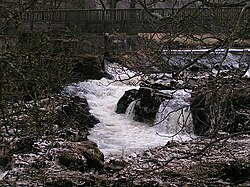 Linton Fall (SE001633) are located just south of Grassington and can be accessed from the village down Sedber Lane. There is a footbridge straddling the falls for viewing.

The Strid (SE064565) is a series of waterfalls and rapids associated with a deep underwater channel caused by the dramatic narrowing of the River Wharfe from approximately 30 feet wide just to the north of the start of the Strid, to the width of a long stride less than 100 yards later. It is especially dangerous as both banks are undercut, and it has been the scene of a number of fatal accidents including those of a honeymoon couple.[1] The Strid walk is very popular and is accessed from the car park at Bolton Abbey.[2]

Towns and villages (from source)