The County of Midlothian or Edinburgh is a shire on the south coast of the Firth of Forth. Its county town and dominating presence is Edinburgh, from which it takes its alternative name of Edinburghshire.

The county lies along the southern shore of the Firth of Forth between, as the name suggests, East Lothian and West Lothian. Midlothian is dominated by Edinburgh, though not as much as Middlesex is dominated by London, Edinburgh being a more restrained city and Midlothian the larger county.

Midlothian is county of contrasts; the busy city and the lovely countryside, the coastal plain and the high hills of Lammermuir.

Edinburgh, Scotland's historic capital, is possibly the loveliest city in Britain. Its heart is the Castle, perched high on its immemorial rock, and the Royal Mile that runs from the Castle to the Palace of Holyrood House, lined with historic buildings and monuments, all part of the national story. This was main extent of Edinburgh before the Union. North of the Royal Mile is the eighteenth century "New Town", no longer new but with the Georgian charm with which it was built. Edinburgh has long since spread about it and incorporated its port, Leith.

In the midst of Edinburgh is Arthur's Seat; a solitary hill, precipitous and natural, surrounded but untouched by cityscape.

East and west of Edinburgh are dormitory towns, suburbs and industrial areas but to the south is a rural Midlothian still, with quieter towns and farms, soon rising into the high pastures of the Lammermuir Hills.

The county is surrounded by sea and seven other counties. It is bounded to the north by the Firth of Forth; to the east by East Lothian; and to the south-east by Berwickshire and by Roxburghshire. On the south are Selkirkshire, Peeblesshire and Lanarkshire, which stretches to the south-west. On the west is West Lothian. For all this its area is a modest 3,662 square miles.

In the Forth, Cramond Island, Inchmickery and Cow and Calves belong to Midlothian. 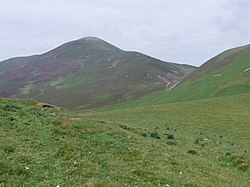 There are no great mountains, but two prominent ranges of high hills.

The Pentland Hills advance boldly from the south-west to within five miles of the sea. The loftiest Pentland summits are Scald Law (1,898 feet), Carnethy (1,881 feet), West Cairn Hill and East Cairn Hill (at 1,844 feet and 1,839 feet respectively), and West Kip (1,806 feet). The Pentland Hills are generally of rounded form, and covered with heath or grass.

The Moorfoot Hills, in the south-east, are a continuation of the Lammermuir Hills and here is the highest ground in Midlothian. The highest hill of all, the county top of Midlothian is Blackhope Scar, which reaches 2,136 feet above sea level.

In common with the rest of the Lothians, Midlothian also has isolated hills, amongst which are the Braid Hills (reaching 698 feet), Blackford Hill (500 feet), Corstorphine Hill (500 feet) and the greatest and most famous of them, Arthur's Seat, at 822 feet above sea level. All these isolated hills are practically within Edinburgh. Dalmahoy Craig too, 800 feet, stands seven miles south-west of the city centre.

Castle Rock is also famed; not so much for height as for its dramatic setting and its central place in the story of Edinburgh, of Scotland and of all Britain, for here, the founding place of ancient Edinburgh, stands Edinburgh Castle. 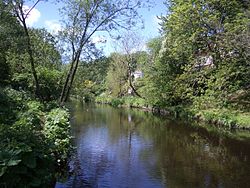 The Water of Leith in Edinburgh

The River Gala rises on the south-east of the Moorfoot Hills and flows south to join the River Tweed in Selkirkshire. The River Tyne rises here too (that of Midlothian and East Lothian, not its more famous namesake) and winds its first seven miles through Midlothian before entering East Lothian. All the other rivers of the shire flow into the Firth of Forth.

Of the Forth-bound waters, the Esk is the longest of the county, draining the district between the Pentlands and the Moorfoot Hills. It enters the sea at Musselburgh. The southern branch has its source near Blackhope Scar, receives on its right Gore Water and, on its left, Dalhousie Burn, and flows past Newbattle Abbey. The northern branch rises in the Pentland Hills, and proceeds through much picturesque scenery past Penicuik, Roslin, Hawthornden and Lasswade; the two streams uniting within the grounds of Dalkeith Palace. Braid Burn from Capelaw Hill passes between the Braid Hills and Blackford Hill, and reaches the sea at Portobello. The River Almond, rising in Lanarkshire, and its right-hand tributary, Breich Water, form the boundary between Midlothian and West Lothian.

The Water of Leith, with its head-streams on the western slope of the Pentland Hills, flows past Balerno, Currie, Juniper Green, Colinton, Edinburgh and to the sea at Leith.

The only loch is that at Duddingston, but there are several large reservoirs connected with the water supply of Edinburgh. The Cobbinshaw reservoir, at the head of Bog Burn, was created to supply the water to the Union Canal connecting the Forth with the Clyde. 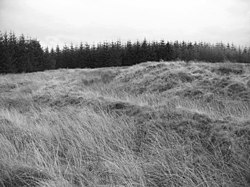 The Romans had a presence on the Firth of Forth: the village of Cramond, now an Edinburgh seaside suburb, was once a Roman seaport, and various objects of Roman art and workmanship have been discovered in its vicinity and along the banks of the River Almond. On several heights are remains of early military works of which the most important are those on Dalmahoy Hill, Braidwood Castle in the parish of Penicuik, and Castle Greg on the Harburn estate in Mid Calder parish.

"Picts' houses" are found at Crichton Mains, at Borthwick Castle, near Middleton House and elsewhere, the first being especially interesting from the fact that some of the stones bear marks of Roman masonry. There are hut-circles and a fort on Kaimes Hill, near Ratho; a large tumulus, with three upright stones, at Old Liston; a smaller tumulus at Newbattle; a cistvaen or stone burial chest at Carlowrie; and standing stones at Lochend, at Comiston (the Caiy stone), and the "Cat Stane" near Kirkliston.

The Roman knew the tribesmen of the Lothians as the Votadini, a tribe famed in a Dark Age poem as Y Gododdin. The Roman retreat led to a brief flowering of the kingdom of Manaw Gododdin, of which the chief seat, Dyn Eidin, is believed to have been Castle Rock, Edinburgh. They fought with their fellow Britons of Rheged and also with the Bernician English, who overwhelmed and conquered them. Traces of the Gododdin are found in such Celtic names as Inveresk, Almond, Leith, Dalry, Dalmahoy, Dalkeith and others, but these are not the dominant forms of place-name by any measure; the vast majority of the towns and villages bear names from Old English; the termination -ton is very frequent.

The Annals of Ulster record in 638 "obsesio etin" (siege of Edinburgh [probably]) but who was besieging whom is unknown; perhaps the English withstanding a Pictish onslaught or the remaining Britons in the fortress faced with an English force. The Bernician and later Northumbrian kings held the Lothians until Northumbria fell to the Vikings, but the remnant of the Northumbrians held on in the north until 1020, when the Lothians were ceded to the Scottish king, Malcolm II. The people of the Lothians, however, stipulated that they were to retain their manners and customs, and in this way the south-eastern lowlands became the centre from which Anglo-Saxon and Norman civilization gradually spread throughout Scotland, and hence, too, was assured the pre-eminence of Edinburgh.

The history of the county is almost identical with that of Edinburgh, whose influence rose from the reign of Malcolm III, though the city was not a regular royal capital until the end of the Middle Ages.

Temple, on the South Esk, was at one time the chief seat of the Knights Templar in Scotland for whom David I here built a church, now in ruins.

The Battle of Roslin was a battle of the First War of Scottish Independence, taking place on 24 February 1303 at Roslin. A Scottish army led by Simon Fraser and John III Comyn, Lord of Badenoch defeated the English. The English force was raised in Northumberland and was tasked with intervening in support of the occupation forces of Edward I. The much smaller Scottish force rode through the night from Biggar, intercepted them and defeated them in two, possibly three, sharp fights. The site of the battle has been said to be the field opposite the old and new burial grounds. Members of the Comyn, Fraser and possibly Sinclair families fought at the Battle of Roslin.

Thirty-one years later at Burghmuir, the English were defeated by the Earl of Moray in 1334.

The last battle of this island's fratricidal wars, the last ever between the Kingdoms of Scotland and England, was fought just in Midlothian at Pinkie Cleugh near Musselburgh in 1547, at which the Protector the Duke of Somerset defeated the Scots decisively in the field, the English navy's cannon supporting from the Firth of Forth. It was a battle which killed the Middle Ages in Scotland; an essentially mediaeval Scottish army was defeated by an English army of the Renaissance, though it did the English little good and they withdrew soon afterwards. Though this was the end of active war, the shire was not to be sure of peace until the union of the crowns in 1603. 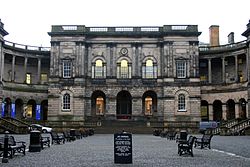 The Old College, University of Edinburgh

The University of Edinburgh was founded in 1583, a new institution of the Reformation and one which was to became a leading part of the city's life.

Civil war remained; the Bishops' War and the War of the Three Kingdoms which it began passed without much bloodshed in Midlothian, though it contained the greatest prize for the armies; Edinburgh. A last gasp was fought at Rullion Green, on the eastern slopes of the Pentland Hills in 1666, when an army of Covenanters was routed by the royal troops under General Dalziel.

In 1707 the last politicians left Edinburgh for London, but instead of declining, Edinburgh and Midlothian flourished in their absence. The University became a centre for learning and the Court of Session for wise jurisprudence without the distractions of Court and Parliament. Merchants could spread their horizons and Leith became all abustle. During the ensuing century, Edinburgh became the leading centre of the Enlightenment and earned the nickname "the Athens of the North". 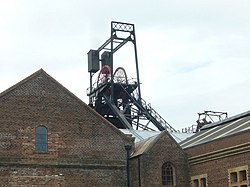 Coal mining began in Midlothian with the industrial revolution and though it was not as busy as in the great coalfields of the land, it has left a legacy in some of the villages. Newtongrange has at the heart of the field. Villages such as Gowkshill were founded as mining villages.

Coal was an industry all along the North Esk; in Penicuik, Loanhead, Bonnyrigg, Eskbank and at Gorebridge, Newbattle, Newbigging, Niddrie, Gilmerton, Mid and West Calder too, while ironstone could be mined at Lasswade and Penicuik.

In the nineteenth century the increased prosperity, improved roads and ultimately an extensive network of railway lines built by the North British Railway Company led to a growth of the towns of Midlothian.

The Heart of Midlothian

Sir Walter Scott placed his home county in the title of one of his most popular novels: The Heart of Midlothian. Though the title may purposefully suggest the tender heart of its courageous heroine, Jeanie Deans, the title in fact refers to the Old Tolbooth Prison in Edinburgh.

The novel takes historic events as background, in particular the Porteous Riots in Edinburgh in 1736, which began over the execution of two smugglers, but burst into frenzy when the Captain of the City Guards, Captain John Porteous, ordered the soldiers to fire into the crowd. Porteous was later killed by a lynch mob who stormed the Old Tolbooth. Such a background sets the scene in Midlothian, while characters and adverntures spread much further afield. 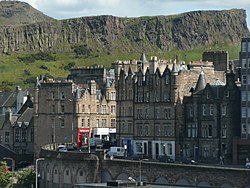 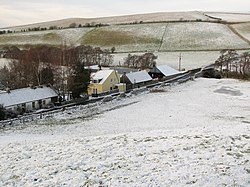 *: Consists of the ancient parishes of St Cuthberts; Canongate; the Midlothian part of Cramond; Corstorphine; Colinton; Liberton; Duddingston; and Leith.
†: Extends into East Lothian.
Additionally the parish of Kirkliston, otherwise in West Lothian extends into Midlothian.

Detail in the Rosslyn Chapel