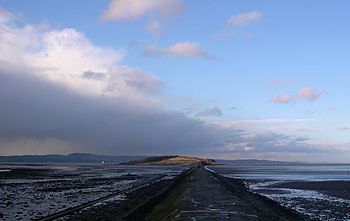 Cramond Island and the causeway from the mainland 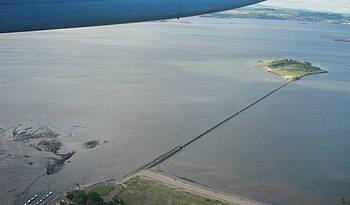 Cramond Island and causeway from the air

Cramond Island is one of several islands that lie in the Firth of Forth. Cramond Island is about a mile out to sea and lies off the town of Cramond. It is joined to the mainland by a long, narrow causeway passable only at low tide.

The isle is just a third of a mile long and covers 19 acres,[1] and is part of the Dalmeny Estate.

The island forms part of the estuary of the River Almond whose mouth is near the landward end of the crossing. It is a popular recreation area, though it is easy to get trapped.

Cramond is only connected to the mainland at low tide, along a paved path, exposed at low water, which allows easy access. A row of concrete pylons stretches along one side of the causeway, which were constructed as a submarine defence boom during the Second World War and are one of the most striking sights in the area.

At high tide the path is covered by several feet of seawater which cuts the island off from the mainland. It is safe to walk along the raised causeway to the island at low tide, but only if visitors ensure that they leave sufficient time to return to the mainland before the water rises. The speed at which the tide comes in can easily trap the unwary. A large sign-post (located at the start of the causeway) warns visitors of the danger.[2] If this warning is ignored, there can be serious accidents[3] or people may be stranded on the island until the next low tide.[4][5][6]

Coastguards recommend that the crossing be attempted only during the two hours either side of low water.

Cramond Island is one of 43 tidal islands that can be walked to from the mainland of Great Britain.[7] 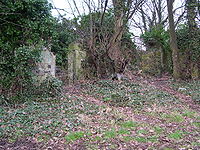 The ruined farmstead on Cramond Island

In prehistory the people who lived along the coast of the Firth of Forth knew this island; at least one stone burial cist has found here.

As nearby Cramond was a Roman outpost, it is possible that the Romans also used Cramond island, and they would certainly have known of it. The Roman presence north of Hadrian's Wall was not particularly strong, but Cramond is one of the most archaeologically rich sites, along with Trimontium near Melrose.

Throughout most of its history, Cramond Island was used for farming, especially sheep-farming,[1] and perhaps served as a fishing outpost as well. The island was once famous for its oyster beds, but these were destroyed due to overfishing. In the northwest corner of the island there are remains of a jetty built with local stone which could be mediæval in origin, while towards the centre of the island, half-hidden by a small wood there is the ruin of a stone-built farmstead. It appears on an Ordnance Survey map of 1853, but may be considerably older. It was occupied until the 1930s and sheep were still kept on the island as late as the 1960s. 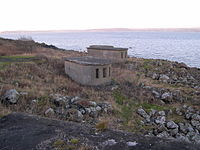 At the outbreak of Second World War, Cramond Island, along with other islands in the Forth, was fortified to protect the coasts in the event of enemy warships entering the channel. A number of these buildings remain and can be explored. After crossing the causeway, the first structures are the emplacements for a 75 mm gun and its associated searchlight. More buildings are in the north east corner of the island, which include a variety of stores, shelters and gun emplacements, as well as two engine rooms that once contained all the equipment necessary to supply power to the military installations on the island.

Further along the northern coast, low concrete stumps protrude from the undergrowth, all that remain of the barracks that housed the garrison on the island.

On the western side is small brick building of unknown purpose. Nearby, perched precariously on the rocky shore is the ruin of a small square building which was used as an ammunition store during the war, though its stone construction suggests it is much older than either World War, possibly contemporary with the farmstead in the middle of the island.