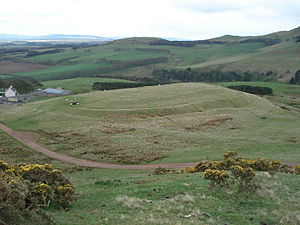 Castle Law is a hill southwest of Fairmilehead in the Pentland Hills in Midlothian.

The hill is best known for the Iron Age fort on its slopes, which gives Castle Law its name.

The Castlelaw Hill Fort is the remnant of a stronghold of the Iron Age. When it was occupied the site consisted of three earthwork ramparts, ditches and timber palisades. The fort contained a Souterrain for the storage of agricultural produce.[1] V. Gordon Childe undertook excavations at Castlelaw in 1932–33. The work focussed on the rampart, and showed that it consisted of a clay and timber filling, faced by stone.[2]

The fort commands views over the Forth and the Lothians. Traprain Law and North Berwick Law, both significant centres of power in the Iron Age, are visible from the site.

The fort is maintained by Historic Scotland.

Access to the site is free but, since the area is an active sheep pasture, dogs should be kept under control.

The site also neighbours an army firing range and so care should be taken not to pass into the area marked by red flags.