Cramond is a village and ancient parish in Midlothian, on the outskirts of suburban Edinburgh. It is stands to the north-west of the city, at the mouth of the River Almond where it enters the Firth of Forth.

The Cramond area has a long history, with evidence of Mesolithic, Bronze Age and Roman activity. In modern times, it was the birthplace of the economist John Law (1671–1729), who founded the Banque Général in France and who first rescued the French ancien regime economy and then bankrupted it.

Cramond was in civic terms incorporated into the City of Edinburgh by Act of Parliament in 1920.

The Roman fort at Cramond might have been named Alaterva, and such was the general believed for many years. A stone altar was dug up in the grounds of Cramond House dedicated "To the Alatervan Mothers and the Mothers of the Parade-ground."[1] Early antiquarians interpreted the inscription as referring to the place where the stone was found, but today scholars suggest that the "Alatervae" may have been a native name for the Matronae or a Tungrian name, given by the Tungrian cohort stationed here and who erected the altar. Nevertheless, the Matres Alatervae (or Alatervia) are mentioned only on that stone, giving strength to Sir John Clerk's suggestion that it was a local place-name, and that Alaterva was the Roman name of Cramond. William Stukeley agreed.[2]

The name 'Cramond' is from the Old British language, from Caer Amon, meaning 'fort of the river' (Modern Welsh Caer Afon), referring to the Roman fort that stood by the River Almond.

Cramond is located in the north-west of Edinburgh, about five miles from the city centre, at the mouth of the River Almond where it enters the Firth of Forth.

The ancient parish of Cramond extends from the Firth of Forth in the north to the parish of Corstorphine in the south, and is bounded on the west by the parishes of Dalmeny and Kirkliston and on the east by the parish of St Cuthbert's.[3] A 1,185-acre portion of the parish extends across the Almond into West Lothian. It covers an area of fifteen square miles, and encompasses the villages of Granton, Pilton, Muirhouse, Davidson's Mains, Blackhall, Ravelston, Craigcrook, Turnhouse and Craigiehall,[4] as well as the offshore islands of Cramond, Inchmickery and Cow and Calves.

Archaeological excavations at Cramond have uncovered evidence of habitation dating to around 8500 BC, making it, for a time, the earliest known site of human settlement this far north.[5] The archaeology reveals a Mesolithic camp-site for nomadic hunter-gatherers.[6] No bones survive the acid soil, but waste pits and stakeholes that would have supported shelters or windbreaks were excavated. Numerous discarded hazelnut shells were found in the pits and used to carbon-date the site, the waste product of the inhabitants' staple food.[6] It is thought the site was chosen for its location near the junction of the Firth of Forth and the River Almond, where the rich oyster and mussel beds proved a reliable natural resource. Many microlith stone tools manufactured at the site were found, and pre-date finds of similar style in England.[7]

A Roman fort stood at the mouth of the Rive Almond. It is assumed that this was built around 142 by order of Emperor Antoninus Pius to guard the eastern flank of the frontier that the Romans had established across the Clyde-Forth line. Nearly five hundred men worked on the site, building a fort that covered nearly six acres and a harbour for communication. However, the fort may have been inhabited for just a short time, perhaps fifteen years, before the Empire withdrew south to Hadrian's Wall, or it may have been one of the Empire's extraterritorial forts. Pottery and coins of later date indicate that the fort and harbour were reinhabited and used as a base for the army and navy of the Emperor Septimius Severus at some time between 208 and 211.

The mediæval parish church of Cramond parish (which retains its late mediæval western tower in altered form), was built within the Roman fort. 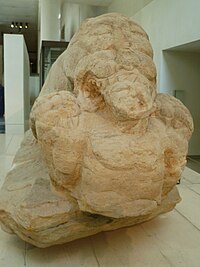 Though knowledge of the Roman presence at Cramond was recorded afterwards, the remains of the fort itself were only rediscovered in 1954. Substantial archaeological research was carried out upon its discovery to build up a reasonably accurate picture of the site in Roman times. The fort was rectangular in shape, with walls fifteen feet high on all sides. A gatehouse was set in every wall, allowing access in all four directions. Inside, there were barracks, workshops, granaries, headquarters and the commander's house. Later excavations revealed other constructions outside the boundary of the fort, including a bath-house, further industrial workshops and a native settlement.

In 1997 the Cramond Lioness was uncovered in the harbour mud by a local boatman (who received a substantial monetary reward for finding this major antiquity), and was identified as a sandstone statue of a lioness devouring a hapless male figure, probably one of a pair at the tomb of a military commander. After conservation, the statue was displayed in the Museum of Scotland in Edinburgh. It is one of the most ambitious pieces of Roman sculpture to have survived beyond the Wall.

After the departure of the Romans, little is known about the state of Cramond for several centuries. The historiography of the period is perhaps best summed up by the historian J. Wood, who wrote 'a dark cloud of obscurity again settled over the parish of Cramond, of which I cannot find the smallest memorial in any historian till the year 995.'[8]

A tower house, Cramond Tower, probably built in the early 15th century, and part of a now-demolished larger establishment, was once a manor house of the Bishops of Dunkeld, of whose diocese Cramond was a part. It was made structurally sound and converted to a private dwelling in the 1980s. 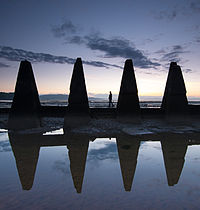 Evening light walk along the causeway 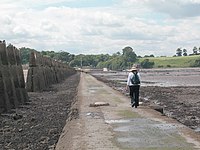 Cramond developed slowly over the centuries, with Cramond Kirk being founded in 1656. After a brief period spent as an industrial village in the late 18th and early 19th centuries, by the late 19th century it became a desirable suburb of Edinburgh, which it remains to this day.

The older houses along the wharf are typical of traditional local vernacular architecture, constructed in stone with harling white lime render finish, with facing stone window and door surrounds and crow-step gables, roofed with orangey-red clay pantiles imported from the Netherlands. A ruined water mill lies further up the Almond along a quiet walk past a yacht club and sailing boats moored in the river. To the east a sand beach and waterfront esplanade provides a popular walk to Silverknowes and Granton. On the other side of the Almond, (once accessible by a rowing-boat ferry) the Dalmeny Estate has a pleasant walk through Dalmeny Woods along the shore of the Firth of Forth.

Near the kirk stands the imposing Cramond House. Its central part is late 17th century, with classical front added in 1778 and back in 1820. Queen Victoria visited while residing at Holyrood. It has been claimed as a possible original of R L Stevenson’s “House of Shaws” in Kidnapped. It is now owned by Trustees of the Church of Scotland and until 2010 was used as the headquarters of the Scottish Wildlife Trust. The Trust relocated to Leith. The Manse dates originally from the mid-17th century and was rebuilt in the mid-18th century. The north wing was added about 1770 and a south wing in 1857. Reverend Walker, the skating minister in Raeburn's famous portrait, lived here from 1776 to 1784.[9]

Offshore, Cramond Island has Second World War fortifications and is linked to land by a causeway with a line of concrete pylons on one side, constructed as a submarine defence boom. At certain low tides sand extends to the island, tempting visitors to visit the island, though occasionally some are stranded by the incoming tide.