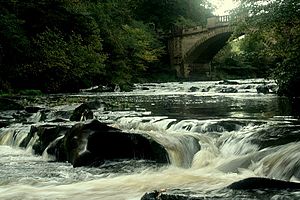 The Almond and Naismith Bridge in Almondell and Calderwood Country Park

The River Almond is a river 28 miles long which forms much of the boundary between Midlothian and West Lothian, before entering the Firth of Forth at Cramond.

The river's name is from the Old Welsh "Avon", which simply means "river".[1] It shares a name with the River Almond, Perthshire.

The Almond rises in a marsh at Hirst Hill in Lanarkshire, near Shotts, and runs eastwards entering West Lothian at Harthill. From here it continues its eastward course past Whitburn and Blackburn, and just west of Livingston it assumes the duty of marking the West Lothian – Midlothian boundary.

The river has a good example of an ox-bow lake near Almondvale West at Livingston. 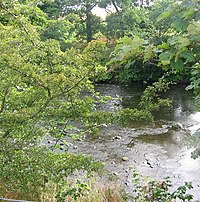 The Almond at Birds Mill

The river runs through the centre of Livingston before passing through Almondell and Calderwood Country Park where it picks up the Calder and Murieston Waters. It then passes over a weir which supplies a feeder culvert which carries water into the Union Canal. Due to the height difference where the river passes under the canal, this feeder must run for many miles eastwards before reaching the canal. By following paths through the country park and along private land to the east it is possible to follow the river and feeder all the way to the Union Canal.

The river then flows east under the Union Canal before turning northwards then northeast, north of the runways at Edinburgh Airport then north past Cramond in Midlothian, draining into the Firth of Forth through wide mudflats just below the town. Cramond Island is at the rivermouth on the Firth.

The mouth of the Almond at Cramond formerly had a small passenger ferry. In 1997 the ferryman discovered the Cramond Lioness, a Roman-era sculpture, in the mud of the river bed. The sculpture is now in the Museum of Scotland in Edinburgh.

The industrial heritage of the Central Lowlands can be observed along the length of the river with numerous weirs, remains of mills and other riverside industries of the past.

Running through what were, for much of the 20th Century, areas dominated by heavy industry and coal mining, the River Almond has been notorious for its high levels of pollution. With the demise of mining and heavy industry in the Central Lowlands the river is now relatively clean and is being actively repopulated by wildlife, including a healthy population of brown trout and improving runs of both Atlantic salmon and sea trout.

There is a good array of birds to be seen around the river banks, including dippers, kingfishers and grey herons, with increasing numbers of otter being reported.

The river is still the primary means of transporting southern West Lothian's waste water to the sea. While the introduction of a number of water treatment plants have helped to mitigate the effects of pollution, the river still suffers from high levels of detergent pollution along with run-off from agricultural land. This has led to the river often having a distinct "chemical odour". This is most noticeable within Almondell and Calderwood Country Park, where there is a major outfall from the nearby East Calder treatment plant.

Fishing on the lower Almond is leased from the Crown Estate by Cramond Angling Club, with both Day and Season Tickets available.