Pathhead village is a conservation area in Midlothian.

The village is around four miles southeast of Dalkeith and eleven miles south of Edinburgh. It sits above the east bank of the River Tyne. The name of the village is due to its position. It stands 500 feet above sea level and is at the head of the ascent of the main route from Edinburgh to Lauder. The A68 road (part of the European route E15) is now the main route through the village. With the opening of the Dalkeith bypass in 2008, it is possible to travel to Edinburgh in 10–15 minutes.

A five-arch stone bridge carries the A68 road over the Tyne Water at the northwest entrance to the village. The bridge is 80 feet high, and each of the five spans is 50 feet across. It was built in 1827–1831 to the designs of engineer Thomas Telford, and is a Category A listed building.[1]

To the north of the village is Preston Hall, an 18th-century country house designed by William Adam for the Duchess of Gordon, and later rebuilt by Robert Mitchell for Alexander Callander, whose descendants still occupy the house. On the opposite side of the Tyne Water is Oxenfoord Castle, originally a 16th-century tower house belonging to the MakGill Viscount of Oxfuird, which was greatly extended in a castellated style by Robert Adam, and further modified by William Burn for the Earl of Stair.[2] West of Pathhead is Vogrie Country Park, centred on the 19th-century Vogrie House, by architect Andrew Heiton. The park is extensive and very popular, particularly around the summer months. It also features a 9-hole golf course.

Two miles southwest of the village stands Crichton Castle. The castle was occupied from the late 14th century through to the close of the 16th century. It was the home of the influential Crichton family, and then passed to the Hepburn Earls of Bothwell, one of whom was the third husband of Mary, Queen of Scots. After Bothwell's fall, the castle was owned by Francis Stewart, who added the remarkable Italian-influenced north range.

The village has a post office, pub, bakery, café, drop in centre and fish and pizza takeaway. There is also a park on the west side of the village which has a full-size football pitch, pavilion building and children's play area. In the newly built primary school (linking local primary schools together) has a 4G astroturf pitch which is located at the north west part of the village. Just off the Main Street there is a Roman Catholic church, St Mary's. 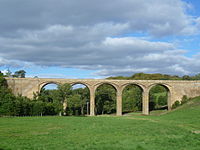 The Lothian Bridge on the River Tyne