West Calder is a town in Midlothian, in the very west of the county, 4 miles west of Livingston, across in West Lothian. The town was an important centre for the oil shale economy in the 19th and 20th Centuries. West Calder has its own railway station.

A memorial in the centre of the town remembers the fifteen men killed on 10 January 1947 as a result of an explosion at the Burngrange oil shale mine southwest of the town.

Most housing in the village dates from the mid-20th century, though it has a public library built as early as 1903. Funded by Carnegie money this building represents a fine example of the Art Nouveau style and has a decorative interior. The parish church (1643) was abandoned in 1880 and is now roofless. 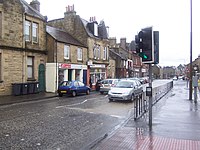