Fala and Soutra is a parish and hamlet in south-eastern Midlothian, extending over the border into East Lothian. It is situated about 15 miles from Edinburgh and 8½ miles from Dalkeith. The name of Fala is derived from Anglo-Saxon Fah, meaning "speckled," and law, the description of hill upon which the church stands. Soutra signifies "the hamlet with a prospect".

The parish is about five miles long from east to west, and one mile broad from north to south, and contains about 3,120 acres. It is bounded by the following parishes: Humbie (in East Lothian) to the east, Soutra (to which it is now conjoined) on the south, Heriot & Stow on the west, and on the north by the detached parts of Borthwick, Cranston, and Crichton. Fala Hall Burn rises in the moor to the south of Fala Flow and forms the boundary between Fala and Soutra. The streams eventually run into the Cakemuir Burn above Costerton. Due to its location, the village, and more so Fala Dam due to its topography, can often get cut off from the outside world during heavy snowfalls, with residents known to be snowed in for several days.

In 1834 a road (today the A68), with a still-extant Toll House at Fala, was constructed between Edinburgh and Lauder and it bisects the parish, marking off the cultivated lands to the east from the pastures to the west. To the west of this highway can be traced the King's Road, which is said to have been made by King Malcolm IV to cross the Lammermuirs to Lauderdale. Dere Street, the Roman road, can be traced at various places on the hills towards Channelkirk to the south-west of the A68. 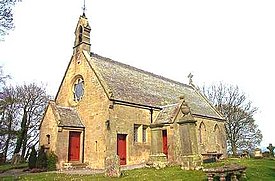 In the ancient taxation of 1137, Fala Kirk had to pay, as its proportion, the sum of six marks, and the Rectory of Fala was, like the other churches in Midlothian during the tenth and eleventh centuries, under the diocese of St Cuthbert. The patronage of Fala, from that time until the 19th century lay with the Lord of the Manor or principal laird of the parish. In ancient times there were some Trinity Friars who had charge of a small hospital in connection with Fala Church (not to be confused with Soutra Aisle), as is evidenced by an entry in the Exchequer Rolls of Scotland in 1365. In Forbes's Book on Tithes, he mentions that the Order of the Trinity Friars was appointed and confirmed by Pope Innocent III in 1200. In the time of King James V the Rectory of Fala was taxed at £6 13s 4d.