From Wikishire
Jump to: navigation, search
Not to be confused with Biggar, Lancashire on Walney Island

Biggar is a town in Lanarkshire, in the Southern Uplands, near the River Clyde and around 30 miles from Edinburgh along the A702. The closest towns are Lanark and Peebles, and as such Biggar serves a wide rural area. The population of the town is 2,301.

The town was once served by the Symington, Biggar and Broughton Railway, which ran from the Caledonian Railway (now the West Coast Main Line) at Symington to join the Peebles Railway at Peebles. The station and signal box are still standing but housing has been built on the line running west from the station and the railway running east from the station is a public footpath to Broughton, part of the Biggar Country Path network.

Remains in 1962 of Biggar station

Biggar has several museums, including the Moat Park Heritage Centre, Gladstone Court Museum, Greenhill Covenanters Museum, and the Biggar Gasworks Museum, the only preserved gas works in Scotland. Many of the museums are run by the Biggar Museum Trust. Additionally, Biggar has Scotland's only permanent puppet theatre, Biggar Puppet Theatre, which is run by the well known Purves Puppets family.

Hugh MacDiarmid spent his later years at Brownsbank, near the town. Ian Hamilton Finlay's home and garden at Little Sparta is nearby in the Pentland Hills. The fictional Midculter, which features in Dorothy Dunnett's Lymond Chronicles novels, is set here. The town hosts an annual arts festival, the Biggar Little Festival. The town has traditionally held a huge bonfire at Hogmanay.[1]

This town has two schools, one primary, and one secondary, the latter taking pupils from surrounding villages.

Biggar occupies a key location close to two great rivers; the River Clyde flowing to the west, and the Tweed flowing to the east. Stone Age and Bronze Age artefacts have been found in the area but the strongest evidence of settlement occurs on the hills surrounding the town. One of these is Bizzyberry Hill where Iron Age remains dating back almost 2000 years have been found.[2] The present day A702 follows the route of a Roman road, which linked the Clyde Valley with Musselburgh (Midlothian).

In the 12th century, in return for the promise of support, King David I gave the lands of Biggar to Baldwin, a Fleming knight. He built a motte and bailey castle, which can still be seen north-west of the High Street.[3] The first permanent crossing of the Biggar Burn was also built. It is thought that there has been a church at Biggar since the 6th or 7th century, although the first stone kirk was built in 1164, on the site of the existing kirk.

In the 14th century, the Fleming family were given lands in the area by Robert the Bruce, whose cause they had supported. The Flemings built Boghall Castle, visible as a ruin until the early 20th century, but now only represented by a few mounds. The town continued to grow as an important market town, and in 1451 the town became a burgh. The market place remains the central focus of the town. The kirk was rebuilt as a Collegiate church in 1546 for Malcolm, 3rd Lord Fleming, the last to be established before the Reformation of 1560. The Flemings found themselves on the wrong side in the 16th century, when they supported Mary, Queen of Scots, and their lands were given over to the Elphinstone family.

Biggar Gas Works opened in 1836, producing gas from coal. In 1973, with the introduction of natural gas, the works closed. Biggar had its own railway station on the Symington, Biggar and Broughton Railway between 1860 and 1953.

John Brown, the physician and essayist, was born in a house in the South Back Road in 1810 which was at that time a manse. He is commemorated with a plaque on the front wall of the municipal hall.

In early 1900 a farmer located in Biggar founded Albion Motors as a small business which eventually grew into the largest truck company in the British Empire. The company still exists as part of the Leyland DAF group. The archives of Albion motors can still be found in Biggar.

In the summer of 1940 several thousands of Polish soldiers were stationed here, having been evacuated after the collapse of France. Later they moved to the east coast of Scotland to defend the coast and to train for their deployment as the 1st Polish Armoured Division in Normandy, Belgium and the Netherlands.[4] 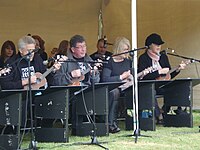 The Biggar Ukulele Ensemble "The Dukes of Ukes"