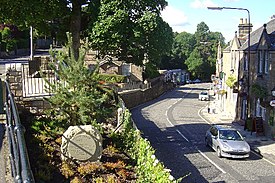 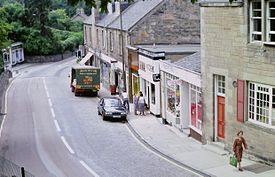 Colinton is a village and ancient parish of Midlothian that forms a suburb of Edinburgh. It is situated four miles south-west of the city centre. Up until the late 18th century it appears on maps as Collington. The village is a designated conservation area. 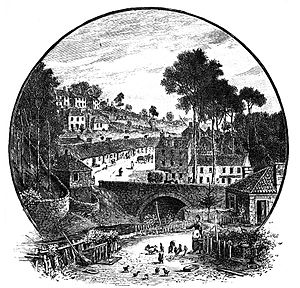 Colinton in the 19th century

Originally sited within a steep-sided glen on a convenient fording point on the Water of Leith, and expanding from there, Colinton's history dates back to before the 11th century.

Close to the Water of Leith is Colinton Parish Church, St Cuthbert's, originally founded as the Church of Halis (Hailes) around 1095 by Elthelred, third son of Malcolm III and Queen Margaret. The current exterior largely dates from 1907 but the structure dates from 1650.[1] The entrance is marked by a lych gate, rare in Scotland and more common in southern England. The cemetery (on the lower slopes to the south) contains the village war memorial. One unique grave within the cemetery is a Norwegian War Grave.

The nearby 15th-century Colinton Castle, in the grounds of what is now Merchiston Castle School, was destroyed by Oliver Cromwell. Following repair, the castle was subsequently partially demolished by the artist Alexander Nasmyth in order to create a picturesque ruin.

Other notable figures with connections to Colinton include: Robert Louis Stevenson who spent the summers of his childhood at the manse when his grandfather was the village's Parish Minister; the philanthropist James Gillespie; and architects Sir Robert Rowand Anderson and John James Burnet,[2] who all lived in the village.

A number of innovative Arts and Crafts-style cottages were also constructed in the village in the early 1900s by the architect Sir Robert Lorimer. Between 1909 and 1915, the War Office constructed Redford Barracks to the east of the village. The barracks represent the largest military installation built in Scotland since Fort George in Inverness-shire and they provide military accommodation, together with offices and training facilities.

The village was the location for mills producing textiles, snuff, and paper. The Caledonian Railway Company constructed a new spur line connecting Slateford and Balerno in 1874, with a station at Colinton. This line continued to carry passenger traffic until 1943, and finally closed when the carriage of freight was discontinued in the 1960s.

Today, Colinton is a suburb in Edinburgh. The original heart of Colinton is still referred to as "Colinton Village", with small speciality shops and many original buildings remaining intact. 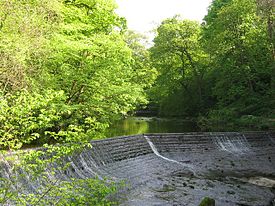 The Water of Leith in Colinton Dell.

The Dell extends along the Water of Leith Walkway from Colinton Parish Church towards Slateford, and contains a mixture of mature and ancient woodland. It is a natural habitat for wildlife. The walkway and cycle path pass by original mill buildings and old tunnel that dates back to when the path was part of the local railway line. Spylaw Park is situated within the area.