Kirkliston is a small town in West Lothian and a larger parish that extends into Midlothian. Its population at the 2011 census was 3,386 based on the 2010 definition of the locality.[1] It lies ten miles from Edinburgh city centre. It sits on the historic route between Edinburgh and Linlithgow (the B9080, formerly the A9) having a crossroads with the route from Newbridge on the A89 to South Queensferry and beyond to Fife (the B800). The B800 is variously named Path Brae, High Street, Station Road and Queensferry Road as it passes through the town. The B9080 is named Main Street and Stirling Road as it passes through. It lies close to the Forth Road Bridge and Forth Bridge and to Edinburgh Airport. It is just north of a northward loop on the River Almond which here forms the county boundary. 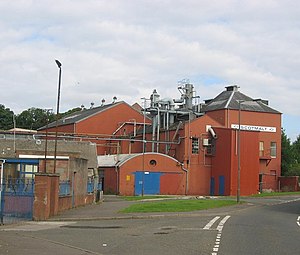 The Maltings in Kirkliston seen in 2005, before being demolished in 2006.

Kirkliston originally appears in documents as Listona, Listun or Listone, derived from the Brittonic llys meaning court or manor, and the Old English tun meaning dwelling-place. In the 13th century the name was recorded as 'Temple Liston' reflecting the town's status at the time as a barony owned by the Knights Templar. The prefix 'Kirk' first appears in the 14th century, after the Knights Templar had been disbanded and their lands given to the Knights Hospitaller.

Kirkliston was the location of the first recorded Parliament in Scottish history; the Estates of Scotland met there in 1235, during the reign of Alexander II. Edward I made camp at the town on his way to fight Sir William Wallace at the Battle of Falkirk. A number of Welsh clerics travelling with Edward are said to have rebelled, and were subsequently slaughtered. A nearby hill, Clerics' Hill, is named in commemoration of them.

The oldest house in the town is Castle House which contains a marriage stone dated 1683. Robert Burns stayed there in the summer of 1787 and inscribed this verse on a window pane:

The ants about their clod employ their care, And think the business of the world is theirs; Lo: Waxen combs seem palaces to bees. And mites conceive the world to be a cheese.

The window pane in question is now kept at a museum in Vancouver, Canada.

The eastern section of the Main Street was added as a toll road to Linlithgow around 1800 and buildings developed along it from that time.

The arrival of the railway in 1842 did not seem to change the town much in the way it changed other towns and towns. The line squeezed between the town and the river, on the south-east side of the High Street, with the station placed just off the east end of the High Street. As with many other rural lines this died in the cuts of 1966.

The war memorial was built to the men of the town lost in World War I on the north-east corner of the main crossroads in 1920.

From 1959 to 2001, Kirkliston was the site of the Drambuie liqueur factory.[2] There had also been a whisky distillery in the south of the town since 1795. In later years this became a malt factory. Both factories have been demolished.

In 1976 the extension to the runway at Edinburgh Airport disrupted the route from Edinburgh to the town, and started to isolate it. Further changes to the M8 and other major arterial routes in Central Scotland have served to further isolate the town and travel to the town from the city is now somewhat circuitous.

The oldest surviving building in Kirkliston is the Kirk, which the town is named after. Its elevated position raises it to a position of great prominence in the local topography. The mound it sits upon is partly natural and partly a burial mound upon which the church has been superimposed.

Parts of this building are over 800 years of age. Many details are rare examples of late 12th century "Norman Transitional" architecture[3] The building was remodelled in 1883 by Robert Rowand Anderson a prominent Edinburgh architect.[3] Originally belonging to the order of Knights Templar, the town was historically called Temple Liston. The manse dates from 1865.

The South Doorway is the most significant part of the building being an excellent example of a Romanesque style arched entrance, typical of the late 12th century, with multiple concentric geometric and sculpted forms in each curve. The projecting wing nearest the camera in the photo is the Stair Aisle, where members of the Dalrymple family, Earls of Stair, are interred. Rev. James Wemyss, M.A. was at Kirkliston from 1663 to 1688, at the time of the Bride of Lammermoor in February 1669. Her brother, John Dalrymple married Miss Dundas about that time when he may have acquired property at Kirkliston from Colin Campbell and built the Aisle.

Kirkliston Parish Church is a congregation of the Church of Scotland (within the Presbytery of Edinburgh). Kirkliston parish also includes Edinburgh Airport and the neighbouring community of Newbridge. The Reverend Margaret Lane became its minister in 2008, succeeding the Reverend Glenda Keating (1996-2008), who has now moved to the parishes of Craigie and Symington in Ayrshire.

The graveyard is of great antiquity. It contains the oldest dated stone in all the Lothian area - 1545 (distinguishing gravestones from memorials)[4] Another interesting curiosity in the graveyard is the presence of a Gravestone dated 1727 that includes two carved heads wearing glasses. If the date on this headstone is accurate then this is the world's oldest depiction of glasses with sides.[5]

The graveyard lies largely to the west of the church on sloping ground in a relatively unusual disposition relative to the church (historic churches normally having the bulk of the graveyard to the south) but this seems largely determined by the line of the road to the south and availability of land to the west allowing expansion. Unusually for towns or towns the much later Kirkliston Cemetery (begun in 1928) has squeezed into a site NE of the church on the site of the former manse and garden.

The Kirkliston Free Church dates from the Disruption of 1843. Having a tall stone spire (added by Hippolyte Blanc in 1880) it also has a commanding role in the local landscape and streetscape. No actual Free Church have met there for many years; nowadays it is used by the Parish Church as a church hall, and it has subsequently been renamed the Thomas Chalmers Centre after Thomas Chalmers the first moderator of the Free Church.

It focuses on the Parish Church, The Square and the High Street but also stretches south down to encompass the remote manse and the little group of buildings at Breastmill (1672) also known as Priest Mill.

Its boundary splits the now largely demolished distillery site and it is recognised that inclusion of the entire site would help to control redevelopment.

The boundary encompasses the River Almond as it passes the town leading to the net area of the conservation area being primarily open space rather than buildings.

Until 1930, Kirkliston had its own railway station, built by the North British Railway. The station was located on a branch line from "Queensferry Junction" (near Ratho on the Edinburgh-Glasgow main line) to Dalmeny, which was opened in 1866. The line was extended from Dalmeny to Queensferry and Port Edgar a few years later.

Kirkliston Station was closed to passengers by the London and North Eastern Railway in 1930. Freight trains through Kirkliston ended in 1966 and the railway track was subsequently removed. There are still references to the station in the name of two streets. The old railway line has been converted into a cycle path.

Kirkliston is serviced by bus service 38 which runs to Stirling and service 63 which runs from Heriot Watt via Gyle, Newbridge, Kirkliston and onwards to South Queensferry 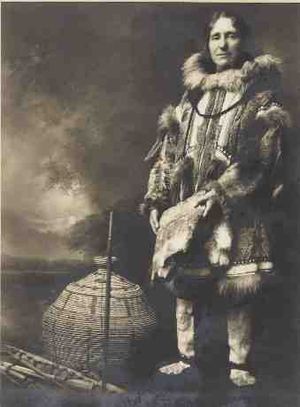 Isobel in an Eskimo coat

Isobel Wylie Hutchison was an arctic traveller and plant collector. She was born in 1889 in Carlowrie Castle, Kirkliston and lived there until her death in 1982. She travelled to Iceland, Greenland, the Lofoten Islands in Alaska and the Aleutian Islands collecting plants and information for her books. She travelled on her own. She wrote several books about her travels, wrote poems, painted pictures which she published on her return.