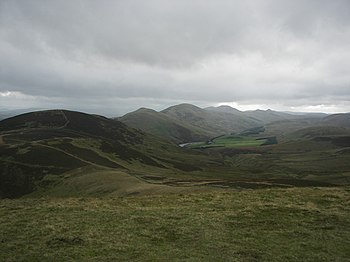 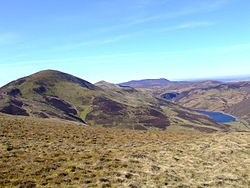 The Pentland Hills are a range of hills in Midlothian and West Lothian, extending from the southwest of Edinburgh towards Biggar in Lanarkshire and upper Clydesdale. The range is around 20 miles in length.

Some of the peaks include:

Most of the land is upland pasture, along with a few forestry plantations. The Ministry of Defence have a rifle range at Castlelaw. Much of Edinburgh's water supply is from reservoirs in the hills, including Threipmuir, Harlaw, Clubbiedean, Torduff, Glencorse and Loganlea. A number of rivers rise in the hills, including the Water of Leith, which flows through Edinburgh, and the North Esk.

In the southern part of the hills is Little Sparta, the garden of the late artist and poet Ian Hamilton Finlay.

Pentland Hills Regional Park was designated in 1984. It covers an area of 35 square miles at the northern end of the hills. The park, together with the rest of the hills, are used for a variety of recreational activities including hillwalking, mountain biking, horse riding, golf and skiing at the artificial ski slope at the Hillend Ski Centre.

The Cross Border Drove Road, a long-distance footpath, crosses the Pentland Hills north to south, following the ancient drove roads by which cattle were driven in past centuries to the markets in the south

Towns and villages in or near the Pentlands include: 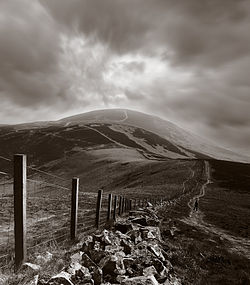 From the slopes of Allermuir Hill

There is ample evidence of prehistoric settlement in the area, amongst which is the hillfort and souterrain at Castle Law,[1] and another at Caerketton. The hills were most likely settled, farmed and defended in the pre-Roman and Roman era by the local Celtic people known to the Romans as the Votadini.[2] About 66 feet into Glencorse Reservoir lie the submerged ruins of the chapel of St Katherine's in the Hope. The founding of the chapel is connected with the story of a mediæval royal deer hunt. According to the story, King Robert the Bruce staked the Pentland Estate against the life of Sir William St Clair, with the outcome of the hunt of a white deer by the knight and his two hounds, 'Help' and 'Hold', being the deciding factor. The dogs managed to bring down the deer, and in gratitude, and to mark the spot, Sir William had a chapel built in the glen.

The hills were the scene of an incident in 1666 following the Restoration of King Charles II when an outbreak of armed rebellion amongst Covenanters led to a small force of badly armed conventiclers being defeated at the battle of Rullion Green, after which the whole tragic episode was (incorrectly) named the Pentland Rising. The incident is commemorated by the "Covenanter's Grave", a cairn after which one of the drove roads across the hills is known.