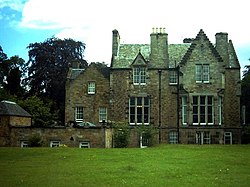 Lasswade is a village in Midlothian, on the River North Esk, nine miles south of Edinburgh city centre, between Dalkeith and Loanhead. Melville Castle lies to the north east.

The current Lasswade Parish Church building was originally built for the former United Presbyterian Church (later United Free Church), which rejoined the Church of Scotland in 1929.

The old parish church was built in the 13th century, though little of it today survives. It was abandoned in 1793 and much of its ruins collapsed in 1866. The 17th century Scottish poet, William Drummond of Hawthornden was buried within its grounds.

Sir John Lauder, 1st Baronet of Fountainhall was born at Melville Mill, Lasswade, in 1595, and the present 18th-century Barony House was known as Lasswade Cottage when Sir Walter Scott rented it (1798-1804). He was visited here by the writer James Hogg (the 'Ettrick Shepherd') and the Wordsworths. Thomas De Quincey, author of Confessions of an English Opium Eater, also lived in nearby Polton for some years from 1843, in the cottage now known as de Quincey Cottage. The Scottish landscape artist William McTaggart moved to Lasswade in 1889, and many of his later works depict the Moorfoot Hills.

Former 19th century industries include paper mills, flour mills and a carpet factory. Created a police burgh in 1881, Lasswade merged with Bonnyrigg in 1929. It was a popular holiday resort in the 19th Century for wealthy Edinburgh residents, yet by the 1950s much of the village's population had left for modern houses in Bonnyrigg.

Lasswade lies within the Edinburgh Green Belt. Most of the population are either retired, or commute into Edinburgh to work. There are, however, several local businesses, including horse riding stables (Edinburgh & Lasswade Riding Centre), a golf driving range and golf course (Melville Golf Centre), an alpine plant nursery (Kevock Garden Plants) and a pub (The Laird and Dog).