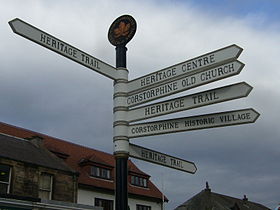 Corstorphine is a village and ancient parish in Midlothian, to the west of Edinburgh and now considered a suburb of that city.[1]

Corstorphine retains a busy main street with many independent small shops, although a number have closed in recent years since the opening of several retail parks to the west of Edinburgh, especially the Gyle Centre. Traffic on the main street, St John's Road, is often heavy, as it forms part of the A8 main road between Edinburgh and Glasgow. The actual "High Street" itself is no longer the main street, an idiosyncrasy shared with central Edinburgh.

Famous residents include Helen Cruickshank, the author. Corstorphine is also mentioned in the novels of Robert Louis Stevenson, and is the birthplace of Alexander Thomson, a writer and publisher on Bible translation.

The area was once served by Corstorphine railway station which provided direct trains to Edinburgh Waverley. It closed on the 30th December 1967. A cycle track runs along the route of the former railway line. 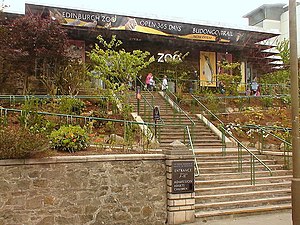 Edinburgh Zoo is situated to the south east of Corstorphine, and is the area's largest and most popular tourist attraction.

There are a number of local shops mostly located on St. Johns Road and also two supermarkets (Sainsbury's and Scotmid) located at the bottom of Corstorphine hill (Clermiston Road).

Corstorphine has one of Scotland's best-preserved late mediæval parish churches, Corstorphine Old Parish Church, with a short tower and spire and several well-preserved stone effigies of the local noble family, the Forresters of Corstorphine.

Corstorphine Hill is one of the so-called "Seven Hills of Edinburgh". Queen Margaret University's main campus was located there from 1970 until 2007 when the university moved to Musselburgh.

The earliest known form of the name is Crostorfin, recorded in 1128. This probably means 'Torfin's crossing'; in ancient times, much of the land in the area consisted of small lochs and marshes, with Corstorphine situated at an ideal crossing point.[2] The identity of Torfin is not certainly known, but he was likely a local baron who commanded a stronghold by the crossing. The name is a Gaelicised version of the Norse name Thorfinnr, and was popular in Scotland around 1000.[2]

A popular legend, now widely discredited, states that a 'cross of fine gold' was presented to the church by a Norman baron, and thus the village came to be known as croix d'or fine.[2] 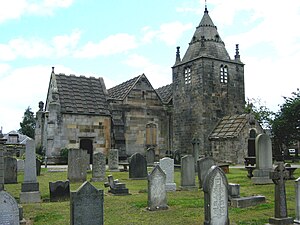 A principal family in the area were the Lords Forresters, whose name has been given to several streets and whose large house can still be seen on Corstorphine High Street. Their main home, Corstorphine Castle, a 14th-century stronghold, was in ruins by the end of the 18th century and does not exist today. The only remnant of the castle is the 16th-century doocot (55°56’21"N, 3°16’53"W) which stands alongside Dovecot Road and a commemoration in a street name, Castle Avenue.

The lands and Barony of Corstorphine have long been associated with the Forrester family. The first firm link with Corstorphine comes with Adam Forrester, a wealthy burgess of Edinburgh in the 1360s when he begins to acquire land in the vicinity.

Between 1374 and 1377 King Robert II confirmed Adam Forrester in the lands of the Lordship of Corstorphine,[3] which had previously been owned by William More of Abercorn. Forrester founded a chapel dedicated to St John the Baptist, connected to the parish church of Corstorphine. 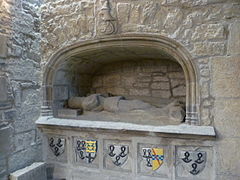 Sir John Forrester, who succeeded his father upon his death, was granted various lands, mostly in West Lothian, in 1426 which were united into the barony of Liberton. In Perth on 4 February 1431 James I confirmed him in the house and lands of Corstorphine which would be thereafter known as the Barony of Corstorphine. He likely founded the collegiate kirk of Corstorphine in 1429, which forms part of today's parish kirk. Sir John is thought to have died in 1448 and was buried in Corstorphine Kirk where recumbent effigies of him and one of his wives survive. He had four children: John, Henry, Elizabeth, and Janet.

William Dunbar mentions a poet Roull of Corstorphin in his Lament for the Makaris c.1505. Little else is known of this poet, though one poem by him may be extant. Stewart Conn, Edinburgh's first appointed Makar,[4] has celebrated Roull's memory in his volume Ghosts at Cockcrow.

The title then fell to his eldest son John, who is believed to have been more of a soldier than a civil servant. In 1443 he was with the Earl of Douglas when he destroyed Barnton castle, a stronghold of the Crichtons. As a direct consequence Forrester's house at Corstorphine was razed. He died in 1454 and was buried in Corstorphine Kirk where his tomb can still be seen.

James Forrester of Corstorphine (son of the previously mentioned James Forrester), husband of Janet Lauder, was confirmed by Mary, Queen of Scots, on 5 February 1556 in the Barony of Corstorphine. In 1577 Sir James presented the parish kirk with a bell for its steeple. This bell still survives, although it was renewed in 1728. 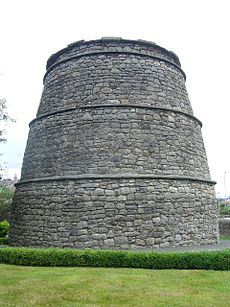 Corstorphine doocot, built in the 16th century to serve Corstorphine Castle, which has since been demolished.

On 10 May 1666, land was similarly granted to John Boyd, merchant burgess of Edinburgh. The Forresters reacquired a lot of their lands around Corstorphine within a short period.

James Baillie's first wife Johanna died early. He then married Janet Ruthven, daughter of the Earl of Forth. This latest Lord Forrester was a man of dubious morals and seduced his niece, the wife of an Edinburgh burgess James Nimmo. She, however, later quarrelled with Forrester and stabbed him to death in his garden at Corstorphine on 26 August 1679. Mrs. Nimmo was later executed at the Cross of Edinburgh for the murder. The titles then fell to William, the son of his brother William Baillie and his wife Lillias, daughter of the first Lord Forrester.

In 1698, the estate of Corstorphine was sold to Hugh Wallace of Ingliston, a Writer to the Signet. He later, in 1713, sold it to Sir James Dick of Prestonfield, in whose family it remained until 1869. (The Dicks were a prominent family of lawyers and merchants in Edinburgh. Sir James Dick (1643–1728) was a merchant and baillie of Edinburgh and also served as Dean of Guild and later Lord Provost.)

The Register of the Great Seal records the transfer of the lands and Barony of Corstorphine to Sir James Dick on 2 June 1713. 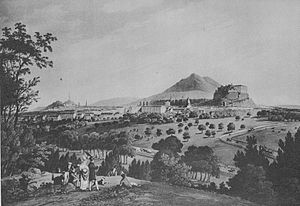 View of Edinburgh from Corstorphine Hill, 1824

Unlike some other areas of Edinburgh, Corstorphine escaped widespread industrialisation in the 19th Century. It only really started to become absorbed into the Edinburgh urban area within the mid twentieth. But even before then there was a changeover into a middle-class dormitory area for Edinburgh workers. By the late twentieth century, Corstorphine had an aging demographic. In 1961, Queen Margaret College (now QMU) obtained land up on the edge of Corstorphine next to Clermiston, and set up a campus there. This was closed in 2007, when they moved all their facilities out to Musselburgh.

There are two rugby clubs based in Corstorphine: Royal High Corstorphine RFC and Forrester RFC.

The local football club is Beechwood FC who play at Gyle Park pitches and at Tall Oaks. These are two of a number of football grounds in the area. There are also two tennis centres at St.Margaret's Park and on Belgrave Road.

There are also two golf clubs based at Carrick Knowe nearby, and also another over on the other side of Corstorphine Hill. Corstorphine Golf Club (now defunct) was founded in 1902. The club and course disappeared in the late 1920s. The area once occupied by the course now forms part of Edinburgh Zoo.[5]