Liberton is an ancient parish of Midlothian that forms a suburb of Edinburgh. It is in the south of the city, south of The Inch, east of the Braid Hills, north of Gracemount and west of Moredun.

The name, of Old English origin and formerly written Libertun,[1] has generally been believed to signify 'Leper Town', the area being supposed at one time to have contained a small colony of lepers exiled from the city. However modern authorities have suggested it may more probably have meant ‘barley farm on a hillside’, from the Old English words hlith, hillside and bere-tūn, barley farm.[2][3]

Liberton Church, by James Gillespie Graham, was built in 1815 after the old church was burned and subsequently demolished.[4] The graveyard contains a "table stone" to the south-west of the church bearing one of the earliest known sculpted depictions of ploughing.[5] A modern cemetery lies to the north-west of the older kirkyard. The war memorial at the western entrance (1920) is by Pilkington Jackson.

Liberton Tower is a well-preserved and restored late mediæval (15th-century) tower house standing to the south of the Braid Hills.[6] Liberton House nearby is a late 16th-century A-listed fortified house, also restored. The house is open to the public free of charge by appointment only.[7][8]

Although the area is mostly residential, it has a riding school and stables, which take advantage of the nearby Braid Hills to offer pony trekking leisure activities. Also in the area is Liberton High School, and Liberton has a thriving rugby union club. 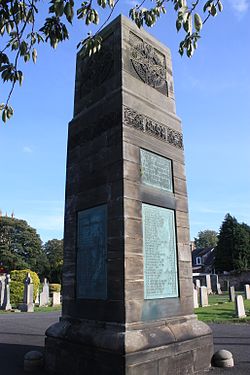