Ratho is a village and parish in Midlothian. Its population at the 2011 census was 1,634 based on the 2010 definition of the locality.[1] Newbridge and Kirkliston are other nearby villages. The Union Canal passes through Ratho. Edinburgh Airport is situated only four miles away. The village has a high ratio of its older houses built from whin stone due to a whin quarry nearby. The village has been a designated Conservation Area since 1971.[2] 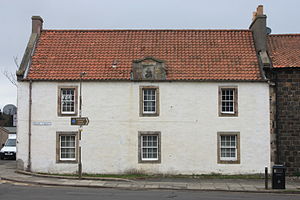 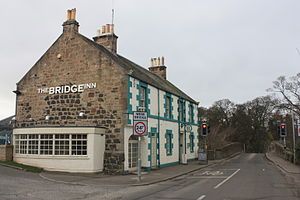 Ratho is the site of stone age circles carved into the rocks atop Tormain Hill and a 'witches' stone'[3][4] When the witches' stone was moved by the land owner for farming, it was believed evil spirits were released into the village. It is believed that the name Ratho comes from Rath, Scottish Gaelic, for a place where there are hill forts. Both Kaimes and Dalmahoy hill forts are nearby.

On pre-1800s maps where place-name spellings varied wildly, Ratho is sometimes referred to as Rathue or Rathua. In 1817 Ratho was separated into "Ratho" (the main village) "Ratho Byers" and "Ratho Bank".

There are a number of old buildings in the area. The most prominent of these was Haltoun House or castle (pronounced, and sometimes spelt, Hatton), which was badly damaged by fire in the mid-1950s and subsequently taken down. This magnificent country house evolved from its central core, a Norman keep, or what Scots call a Pele Tower. In 1371 the manor and lands of Haltoun were resigned to the Crown by John de Haltoun, and were regranted to Alan de Lawedre [Lauder] of that Ilk who then resided mostly at Whitslaid Tower just outside Lauder. Haltoun Tower was damaged during the House of Douglas troubles of 1452, when a note in the Treasurers' Accounts show funds being provided for its repair. The Haltoun estates remained in the Lauder family until the latter half of the 17th century when they passed by marriage to Charles Maitland, 3rd Earl of Lauderdale, who enlarged and beautified Hatton House. 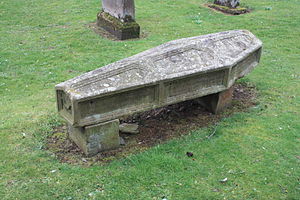 There is evidence of a pre-Norman, Celtic church on this site, and reference to St Mary's in Ratho date back to 1243.[5]

The east aisle is dated 1683. West of the south aisle (1830) half of an ornate 12th century doorway is still visible. Generally the church has never been grand, but it bears the hallmarks of centuries of evolutionary change. The interior was generally denuded in 1932 including loss of the 18th century gallery. A 13th century memorial lies in the south porch.[6] One curious feature is the bell, which was rung by an external chain which has carved a groove into the stonework below the bell.

The churchyard is of equal antiquity and interest. Its greatest oddity is a gravestone to John Mitchell who died in 1749 aged 80 years. He was a mason by trade and the gravestone was cut out many years before he died in the form of a panelled coffin.[7][8] Richard Lauder, the last Lauder laird of Haltoun, was interred in the graveyard on November 29, 1675. Other graves of note are Thomas Wilkie (d.1679), William Anderson (d.1756) and the Rev Andrew Duncan (d.1827) (Moderator of the Church of Scotland in 1824).

The manse is a very fine two storey Georgian villa standing to the east on the opposite side of the main road. It dates from around 1790 and is constructed of whin stone. It faces southwards, away from the road. Its outbuildings have been converted into a separate house now slightly separating it from the church.

A new cemetery of far less character now lies on the NE outskirts of the village, slightly out of sight from the churchyard, just east of the manse. 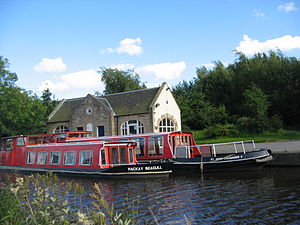 Seagull Trust base at Ratho

Ratho is located close to both the M8 and the M9 motorways. The A8 and A71 roads run parallel to the north and the south of the village. These are two of the major roads running into Edinburgh. There is a network of paths around Ratho and the surrounding area, and you can also walk or cycle along the canal towpath.

Ratho is the location of Edinburgh Canal Centre, founded in 1989 by Ronnie Rusack. The Seagull Trust is a boating charity offering free cruises to disabled people since 1979. It also boasts the only dry dock on the Union Canal. On either side of Bridge 15 are a series of artworks relating to the canal's history. Many of these can be used as seating.

West of Ratho stands a small group of mill buildings dating from around 1600. A group of rubble-built cottages sited at right angles to the mill were demolished in the 1960s reducing the size of the group.

Conversion to a house in 1971 by Morris and Steadman greatly reduced its historic significance and it is listed category C.

In the wood above Lin's Mill is the grave of William Lin reputed to be the last man in Scotland to die of the plague (but many similar plague graves exist from that year). The grave is marked by a slab with a crude coat of arms, memento mori and the inscription "Here lyeth the dust of William Lin right heritor of Linsmiln who died in the year of the lord 1645".

The nearby Almond Aqueduct on the Union Canal is also known as the Lin's Mill Aqueduct. 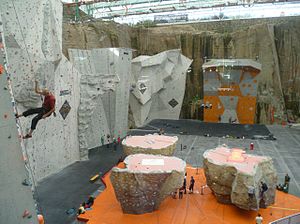 Edinburgh International Climbing Arena, the largest indoor climbing centre in Europe, and one of the biggest in the world, opened in October 2004 near Ratho, on the bank of the Union Canal. The centre was closed for the end of 2006 and partially open for the first quarter of 2007. It has had some major works completed and is now fully operational. It boasts 26,000 sq. ft of artificial climbing surface, including 4,300 sq. ft of free-standing boulders, there are also plans for an additional bouldering room, however which was to open around July 2007. The centre is unique in its use of covered natural rock. Competitive and amateur climbers are attracted from around the world and the centre provides training up to World Cup competition standard. Above the climbing arena is SkyRide, a 500 ft aerial assault course taking 10–30 minutes. In addition there is also a large gym, with new equipment and a spa facility.

Ratho climbing centre was inspired and designed by Edinburgh-based Architect David Taylor and was assisted by experienced climbers Rab Anderson and Duncan McCallum.